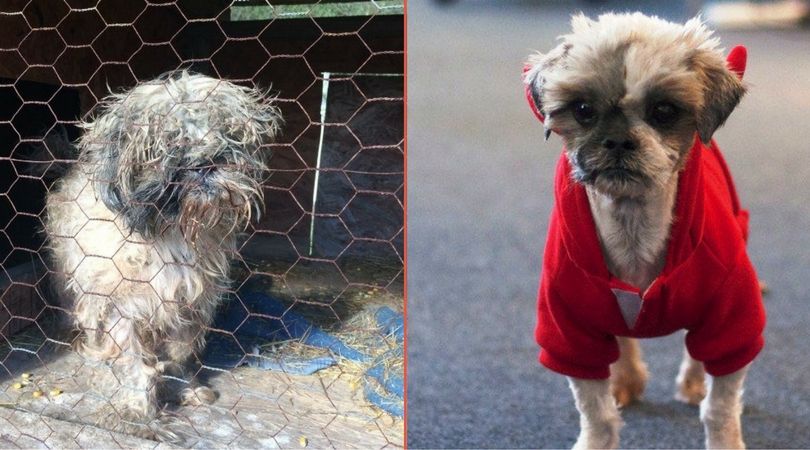 Given away by one family, then left to languish in a cage out back by another, Larry’s odds of ever enjoying a loving home were slim. But not only has Larry finally found a caring family, he now stars in a video featuring a “note card confession” of his traumatic experiences.

Larry was living in a wire cage, wallowing in his own waste and suffering from parasitic infection. PETA rescuers only found him while tending to another dog chained up in the yard. They almost didn’t see Larry’s cage because it was hidden behind a pile of junk.

But these days, Larry’s life is drastically different.

“His health is MUCH better,” PETA Foundation Membership Correspondent Alexandra Cook — and Larry’s new mom — told Lady Freethinker. “He had a skin infection along with fleas and was super itchy for a while but we got both of those taken care of and he has recently been more energetic than usual!”

While he used to live in solitary confinement, Larry now often falls asleep on the couch cuddling with Alexandra. He also gets to go on adventures he’d probably never dreamed of in his old life.

“He loves going places, although he isn’t a fan of riding in the car — but he absolutely adores the beach and digging in the sand!” Alexandra explained.

Larry’s story may sound extreme, but millions of dogs like him end up in rescue shelters across the United States each year. The best way to help? Always adopt — don’t buy — companion animals. By adopting a “hopeless” dog like Larry, you give an animal a second chance at life.