This New Group is Paving the Future for Cruelty-Free Fashion

Home » Animals » This New Group is Paving the Future for Cruelty-Free FashionBy Lady Freethinker | May 25, 2020 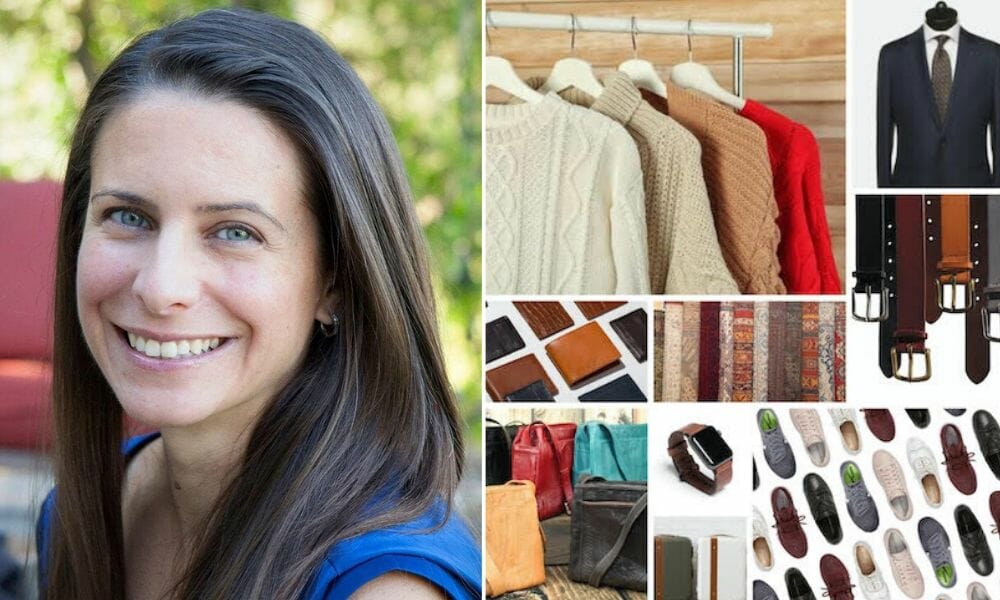 As a pioneer in the plant-based food market, Nicole Rawling helped propel meat alternatives to mainstream status, proving that people — vegan or not — care about reducing cruelty to animals as well as slashing their environmental footprint. Now cofounder and executive director of Material Innovation Initiative, she’s using those same skills and values for a new cause — introducing plant-based, sustainable materials for our wardrobes, vehicles and more.

I caught up with Nicole to talk about her newest venture. Here’s what she had to say:

Nina: So to start, can you tell me what Material Innovation Initiative does?

Nicole: We accelerate the development of next-gen materials for the fashion, automotive and home goods industries, with a focus on replacing animal materials like leather, wool, silk, down, fur, and exotic skins. Billions of animals die every year for these materials. When you add in silkworms who are boiled alive for their silk, it’s in the trillions. 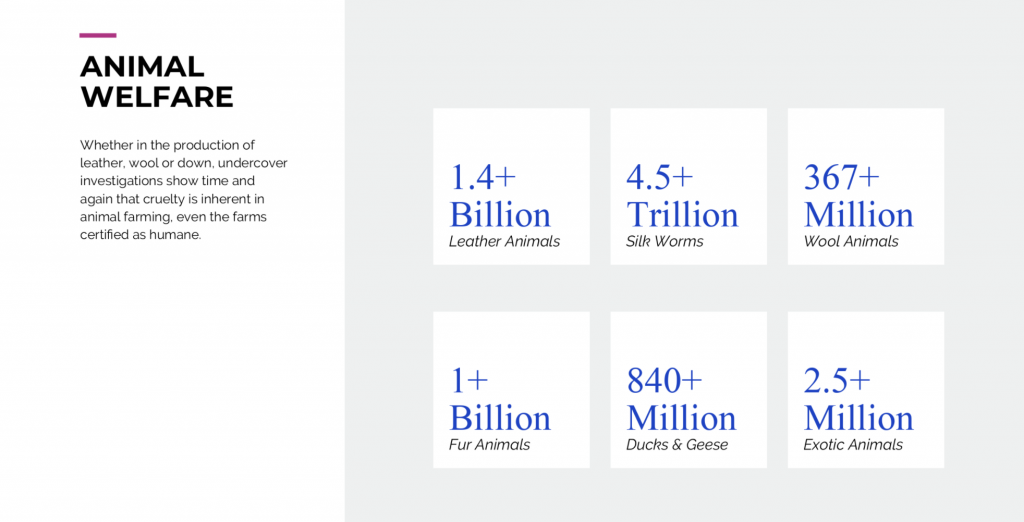 Nina: And what drew you to this work?

Nicole: I ran the international programs at the Good Food Institute for two years. I thought GFI was doing an incredible job in transforming the plant-based meat industry, and Stephanie [Downs] approached me with this idea for doing the same thing for fashion. I thought it made a ton of sense. So we’re copying those same programs for the fashion industry.

Nicole: Well, I think it’s two things: One, in both the meat and animal materials industries, there’s extreme animal cruelty, and two, they’re just terrible industries for the environment. It’s very similar, when you get massive numbers of animals in small areas and when animals are used as commodity. Our solutions are also similar; we are working with scientists and entrepreneurs, material startups, brands, all to create this ecosystem of alternative, what we’re calling next-gen, material.

Nina: Speaking of the environmental aspect, there’s a perception that animal skins or wool are actually the most sustainable options, but that’s not really true, right?

Nicole: There is a well respected nonprofit that conducts environmental analyses of all materials used in fashion — it’s called the HIGG index.  The statistics are coming from them; they’re not an animal protection group, so they have no bias. And from their data, three out of the five most environmentally damaging materials come from animals. Leather is the single most polluting and resource intensive material on the market, silk is second and wool is fifth. It makes sense — in order to produce animal material, we need to use the inefficient system of a living creature, which needs to eat plants, to breathe and move and grow, right? A cow needs to live for over two years in order to produce one hide. That’s a lot of resources.

Nina: That makes a lot of sense, but I think that’s going to surprise people, because one of the arguments for leather and wool is that the alternatives are so bad for the environment, right?

Nicole: Unfortunately, the materials that are animal free on the market now for the mass consumer are mostly petroleum-based — but shockingly, they still are better than animal leathers.

Nina: That’s fascinating — I didn’t know that. And what do you have planned for the future for your organization?

Nicole:
Like most people, it’s a very difficult time. What we saw in the fall when we first started, though, is that fashion brands from all types of areas in the fashion industry, from luxury to mass market, are really interested in alternative materials. We met with over 40 brands, I got to travel to London and Paris and Milan, meeting with these innovation teams. This is a brand new organization and they were very, very excited to talk to us about new opportunities. Right now, our concern is, like most industries, the fashion industry is really hurting; and unfortunately, during times like this, things like innovation are put on the back burner.

But we’ve been talking with a number of our contacts who say they still see that consumers want these alternative products. They want products that do not engage in animal cruelty and are good for the environment, and they are realizing now how volatile their supply chains are. A lot of the US companies are sourcing from places like China, and trade disruptions really cause major issues in their production lines. So they are looking to risk-proof their business in the long run. 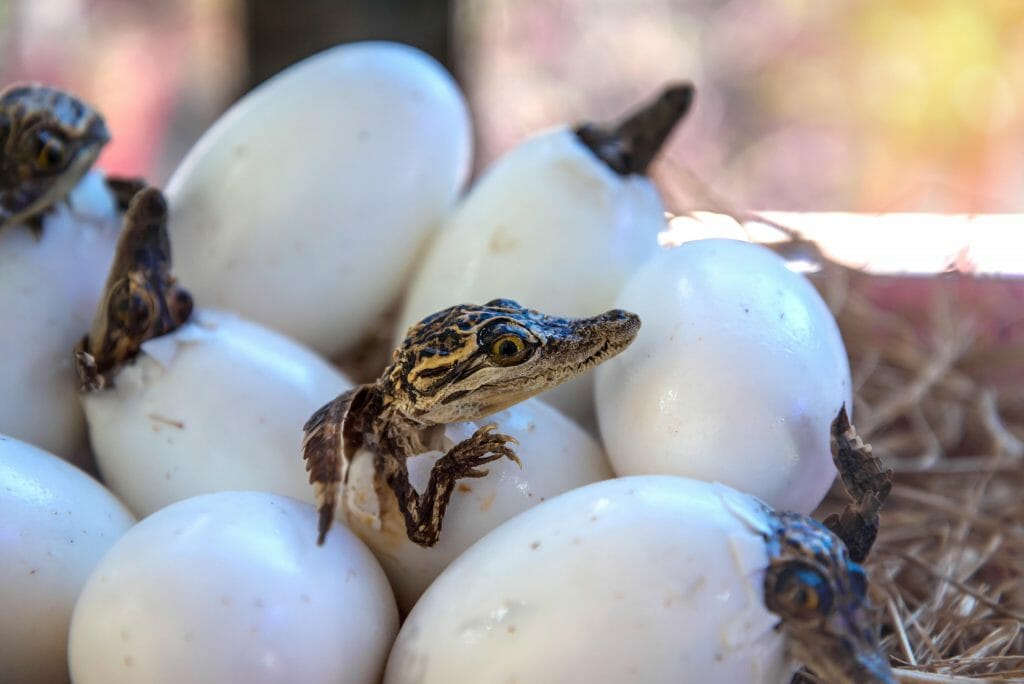 Alligators are killed and turned into bags for fashion

Nina: So what kind of response have you gotten?

Nicole:
Out of about 40 top brands we’ve met with, only two said they thought they could handle this on their own and didn’t need to talk to us. I think there was only one, possibly two, of the fast fashion brands that was fairly honest and said, “Look, right now there’s just no way we can engage, these products are just much too expensive for our products and clientele.” So that’s around 36 that we’re still engaged with.

I think they recognize what the public wants. We did a study in the fall for US-based consumers and found that 55% would prefer to purchase a leather alternative over leather. And then we asked “why?” Forty-seven percent of them said they would switch because of animals, and 29 said they would switch because of environmental concerns. It was really high. We looked at the geographic breakdown — it’s across the entire United States, it’s age ranges from 18 to 65, a good mixture of almost half women and men. These are people who are at average income throughout the United States.

Nina: What do you tell people who say the cow was going to die for meat, anyway?

Nicole: We hear a lot, especially with leather, that these animals are used for meat and then the leather is the byproduct. Here’s our response: The percentage of the profit from the skin tends to be around 8% of the value of the animal. And the margins are very low in cattle production. We don’t really know what taking away that 8% profit would do, but in most industries, a reduction of 8% profit is a really big deal, and that could also increase the price of meat, which then makes the plant-based alternatives to meat even more price competitive.

Nina: We’ve seen the huge success of Beyond Meat and Impossible — is the fashion world next?

Nicole: Stephanie, my cofounder and I, are really excited to see what we’re doing now versus in the plant based meat industry, when the Good Food Institute started. Then, you didn’t have Burger King, Whole Foods, Safeway, et cetera, actively looking for these alternatives, right? It took a while to convince them that these were products for the mass market, not just for vegans or vegetarians. But in the fashion industry, we have major international luxury brands and mass market brands who really are actively looking for them and know about these alternative material companies before we even come in. And so it’s really exciting. I think the change is going to happen fairly quickly.

I ran GSI international programs in China, India, Europe, Israel, and Brazil. And so we engage in all these programs, we’ve done all of this before. When we talk to the fashion brands, we say, “Look, this is the change that we saw in the plant-based meat industry. We’re using the same exact techniques in the materials industry.” Everybody’s heard of Beyond Meat or Impossible Foods. That’s really exciting — that change happens so quickly and that change can happen just as quickly in the materials industry.