Home » Animals » New Baby Rhino Spotted – A Symbol of Hope For a Species Ravaged by Poachers By Sophie Dixon | September 26, 2017 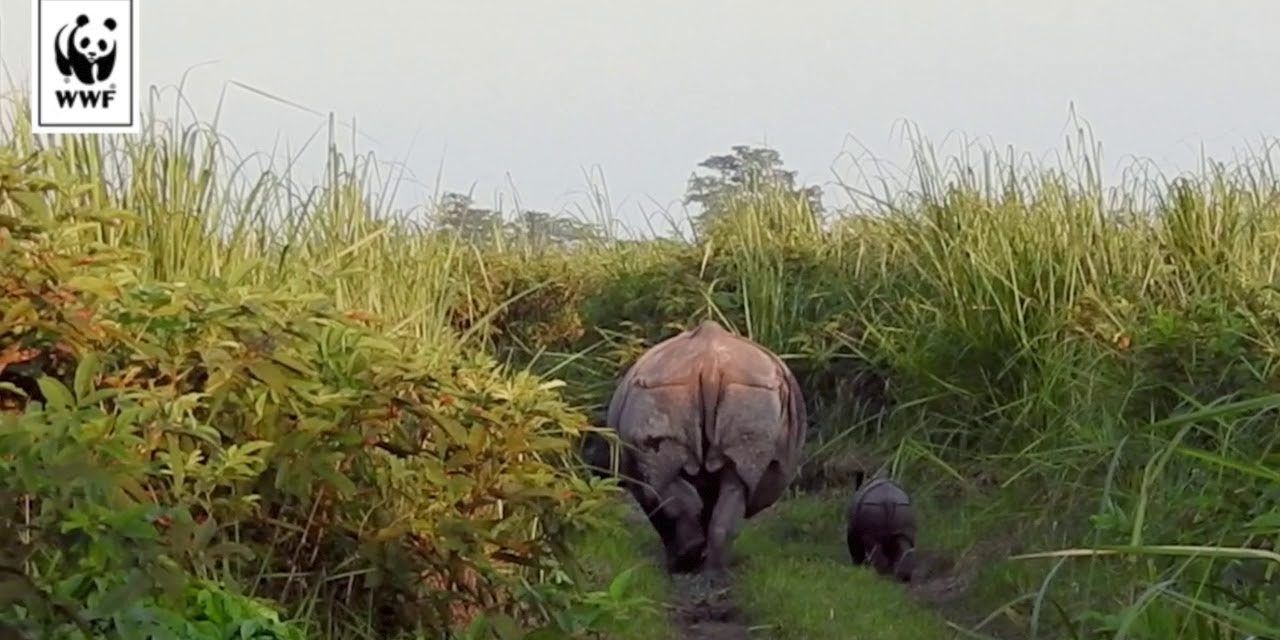 A new baby rhino is igniting optimism for the future of the species’ dwindling population. As the baby strolls along next to mother Jamuna, we remain hopeful that the rhino population has a chance of recovery.

Jamuna was rescued from Kaziranga National Park when she was just a calf, and taken to the Centre for Wildlife Rehabilitation and Conservation. The conservation, run by the Wildlife Trust of India/International Fund for Animal Welfare and the Assam Forest Department, focuses on giving the care essential to orphaned or injured wild animals.

After being raised at the centre, Jamuna was then transported in 2008 to Manas National park, located in the northeastern Indian state of Assam, as part of the conservational efforts.

While concerns are growing worldwide for the shocking decrease in rhino population due to poaching, Jamuna’s calf is her second since 2013 and a strong indication that rhinos in Manas are reproducing.

Whereas in 1975, there were only 600 rhinos left, it is now estimated that there are 3,500 greater one-horned rhinos in both India and Nepal. Amazingly, it is the only large mammal in Asia to be down-listed from endangered to vulnerable on the International Union for the Conservation of Nature’s (IUCN) Red List of Threatened Species.

“This birth is significant, and shows so much promise for this population of rhinos in Assam,” said Nilanga Jayasinghe, senior program officer with the World Wildlife Fund’s wildlife conservation team. “Greater one-horned rhinos are one of Asia’s great conservation success stories, and each new calf adds to the upward trajectory of a rhino population that was once down to about 200 individuals at the turn of the 20th century.”

The conservation includes protecting the rhinos from poachers, preserving their habitats and relocating rhinos from highly populated areas to those with sparse populations. This translocation of the rhinos not only helps to establish viable populations in various locations but also facilitates increased genetic diversity, providing the rhinos with the resources essential to reproduce.

The World Wildlife Fund has been working with India’s Ministry of Environment, the government of Assam and the International Rhino Foundation to implement the Indian Rhino Vision 2020 program. The point of the program is to reintroduce rhinos to Manas with the hope of establishing a breeding population. After the translocation of 18 rhinos and the births of 15 more, there are 29 rhinos in Manas so far.

“Manas National Park is the first location to which greater one-horned rhinos were translocated as part of the IRV2020 program, and despite conservation challenges over the years, the population is growing,” Jayasinghe said. “As we continue our work to increase populations and further their conservation, we are excited to pause to celebrate this calf’s arrival.”

Though the rhino has been battling against poaching for many years, the population is bouncing back with a ferocity to be reckoned with. As Jamuna’s little calf takes its first few steps into the world, it leads the rest of us on a path of hope and admiration.