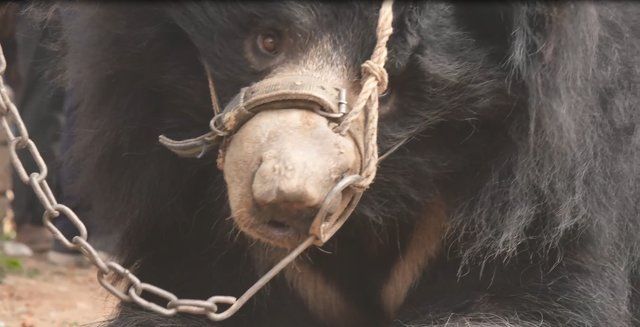 Nepal’s last dancing bear has been through a tumultuous ordeal, but it looks like the sun will finally shine for this precious sweetheart. Rangila is a seventeen-year-old sloth bear who was most likely snatched from the wild as a baby, his mother probably killed in the process. He was then “trained” to become a dancing bear, which included piercing his nose with a burning hot rod and putting a rope through it so his owners could control him. Rangila was then exploited on the streets and forced to perform, or “dance,” for the amusement of humans.

The training of bears to dance for a paying audience used to be popular throughout Europe and Asia, and it remained common in Eastern Europe and Asia until the late 20th century. Countries including Albania, Bulgaria, Greece, India, Serbia, Turkey, and now Nepal are believed to no longer have dancing bears, but the practice continues in Pakistan. The use of “dancing bears” was banned in India in 1972.

In December 2017, World Animal Protection and the Jane Goodall Institute finally freed the last two known dancing bears in Nepal. Named Rangila and Sridevi, they were supposed to then be taken to the bear rescue center run by WildlifeSOS in Agra, India. Unfortunately a last-minute decision by the Nepalese government re-routed the bears to a substandard zoo instead. The animal rights groups immediately started negotiating with the Nepalese authorities, trying to convince them to allow the bears to go to the sanctuary.

While everyone was trying to navigate the many bureaucratic hurdles and required paperwork for a transfer, Sridevi the bear tragically died while at the zoo. The death of his only friend left Rangila even more traumatized, and he spent his days frantically pacing back-and-forth in his cage at the zoo. This prompted an outcry, and the Nepalese government finally agreed to allow the remaining bear to be transferred to the rescue center.

As you can see in this recent video from WildlifeSOS, the entire journey was quite an ordeal. Rangila’s travel from the zoo in Nepal to the sanctuary in India took 30 hours, but he is finally safe and sound at the rescue center. After a required period of quarantine and a thorough medical evaluation, Rangila will be released to sanctuary grounds. Although after so many years of abuse Rangila is exhibiting psychological stress and trauma that could take him years to recover, he will receive the best of care and rehabilitation and will be free to play and frolic with the other bears who live at the rescue center.

The Agra Bear Rescue Center in India is home to nearly 200 rescued sloth bears, and they all receive specialized veterinary care.

“He will have a large forested enclosure with a pool, lots of trees to climb, and other bears to play with,” said co-founder of Wildlife SOS Geeta Seshamani.

Now, thanks to the hard work and collaboration of these determined organizations, Nepal’s last dancing bear can finally live in peace.