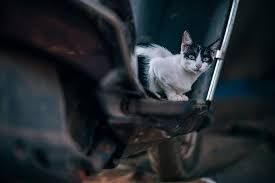 On Saturday, December 8 in Kent, UK, the Royal Society for the Prevention of Cruelty to Animals (RSPCA) rescued an eight-week-old kitten from underneath the hood of a car.

Around 10 AM, the driver heard a noise and discovered the kitten, who had spent the night hiding near the car’s engine.

The ordeal was far from over – when the scared kitten was found, he ran and hid in the engine of another car, and became stuck.

Grace Harris-Bridge, an inspector at the scene, found that the kitten was truly inaccessible: “When I arrived the kitten was right at the bottom of the engine, I tried to reach him but it was proving impossible.”

Fire and Rescue Service reported to the scene and reached the kitten by unscrewing the bottom of the engine. His rescuers could tell by his feisty reaction that he wasn’t used to being handled by people, but they still managed to safely remove him.

The adorable kitten has been named Spark Plug and nicknamed “Sparky.” Luckily, he was unharmed and was taken to the RSPCA’s Canterbury location. Sparky is now in a foster home.

Cats and kittens are often attracted to car engines during cold months because of the heat they continue to emit shortly after being turned off. Fear of humans also prompts them to seek hiding spots such as this.

To avoid having a kitten get stuck under the hood of your car, it’s best to park it indoors, if possible. You can also use cat deterrent spray on the areas of your car that may act as access portals to the engine.

If a cat happens to get into your engine, loud noises, such as banging on the hood or hitting the “panic” button, may be enough to safely scare them out.

If you have a kitten or a cat, the possibility of becoming stuck in an engine is just one of many reasons you should consider keeping them indoors. An enclosed outdoor area, such as a screened patio, or supervision while outdoors are safer alternatives to letting your cat go outside alone.