Marooned Pigs Rescued… and then Returned to Neglectful Owner 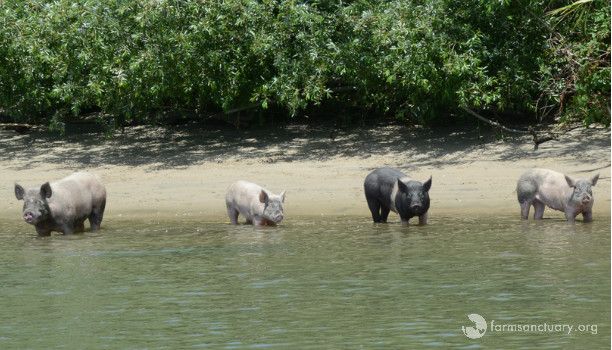 Farm Sanctuary rescues half a dozen pigs on an island in California.

Just off the coast of California in the San Joaquin Delta, half a dozen pigs struggled to survive on a small island for years. Their only food was roots and whatever curious boaters gave them. However, an animal rescue and protection organization, Farm Sanctuary, took the initiative to rescue the stranded pigs. Now, a growing controversy over the rescue leaves the pigs to an uncertain fate.

In an interview with CBS Sacramento, Roger Stevenson claims to be the owner of the pigs. He says he and the owner of Walter’s Island brought the pigs there about four years ago to control the vegetation. They believed the pigs would eat roots on the island.

However, in a request for donations to help the pigs, Farm Sanctuary’s National Shelter Director Susie Coston writes that “although the pigs likely cleared a few plants they are not aquatic mammals.” According to her statement, the original pigs actually died out – only their offspring survive.

Conditions on the island were not suitable for the pigs, and the situation was complicated further by visitors to the island. While some people had good intentions and brought food to the pigs, others acted irresponsibly and cruelly.

Coston says people have ridden the pigs, harassed them, given them beer, and even hunted them. 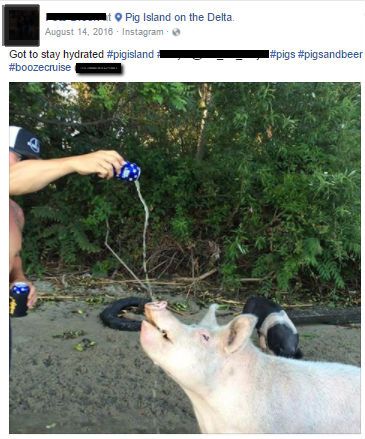 Pigs on Walter’s Island were often mistreated, and even given beer until Farm Sanctuary rescued them. Picture courtesy of Farm Sanctuary.

Farm Sanctuary took matters into their own hands. Over the course of two days, they rescued the frightened pigs using a chute system. Safely back on land, the pigs took their first visit to the veterinarian. Farm Sanctuary planned to find the pigs forever homes through their adoption network.

Pigs face a long struggle ahead

However, the pigs may have another struggle to face. The man claiming to be their owner filed a stolen report.

Coston claims she acquired the pigs legally, with permission from the family that owns Walter’s Island. For all intents and purposes, the pigs were abandoned on the island and malnourished.

“We do own the pigs. We got the pigs by legal means,” Coston told the Sacramento Bee. “You can’t come back four years later and say these are mine.”

Unfortunately, the sheriff’s department sees things differently. According to the Guardian, law enforcement found Stevenson to be the rightful owner and Farm Sanctuary has to return the pigs.