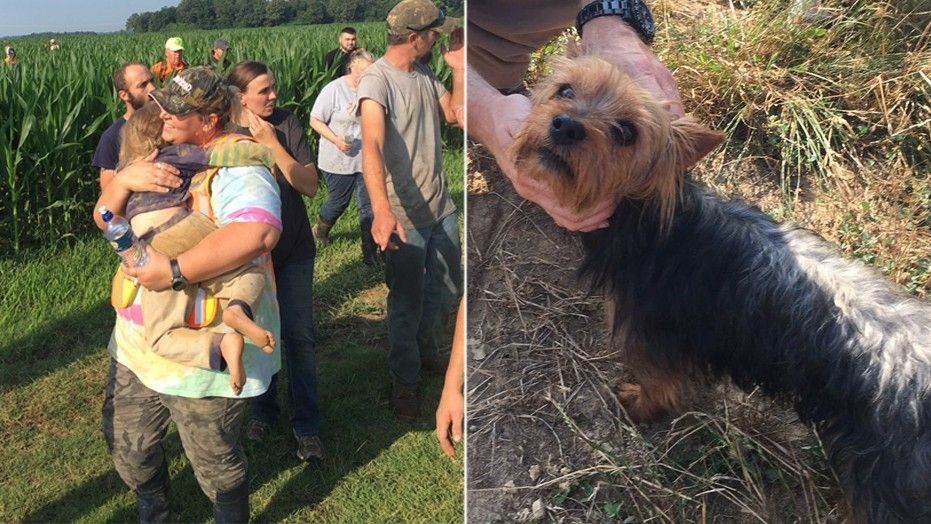 A three-year-girl went missing for 12 hours in Qulin, Missouri last week. After finding her, the family learned that the pint-sized but loyal family dog watched over her the entire time.

Young Remy Elliot wandered too far from her rural backyard on Thursday evening and became lost in a nearby cornfield. Luckily, her good buddy Fat Heath, a Yorkshire terrier, joined her on her journey.

Remy’s mother, Timber Merrit, realized her daughter was missing at around 8 pm. She quickly contacted authorities, and the local community immediately came to help with around 100 volunteers and two helicopters joining the search.

After looking for Remy most of the night to no avail, searchers took a break before getting back out into the cornfields early on Friday morning. The mission was not easy amongst the endless thick fields of corn.

“The corn feels like razor blades cutting you, especially for a child,” said local volunteer Makayla Hardcastle. “You don’t hear well in the corn either, so when somebody is yelling your name, I mean you hear them, but you don’t know where it is coming from.”

At around 8 am on Friday, Remy’s uncle heard barking and followed the sound to find Remy asleep in the cornfield, only about half a mile from the family house, with Fat Heath guarding over her.

“She was definitely exhausted, hot, really sweaty and it took a while to drink anything,” said Merritt. “She said she wasn’t scared because Fat Heath was there. If he wasn’t, I think she would’ve been terrified.”

Luckily, young Remy and her tiny canine protector were both in good health, with Remy sporting only a few mosquito bites to show for her ordeal.