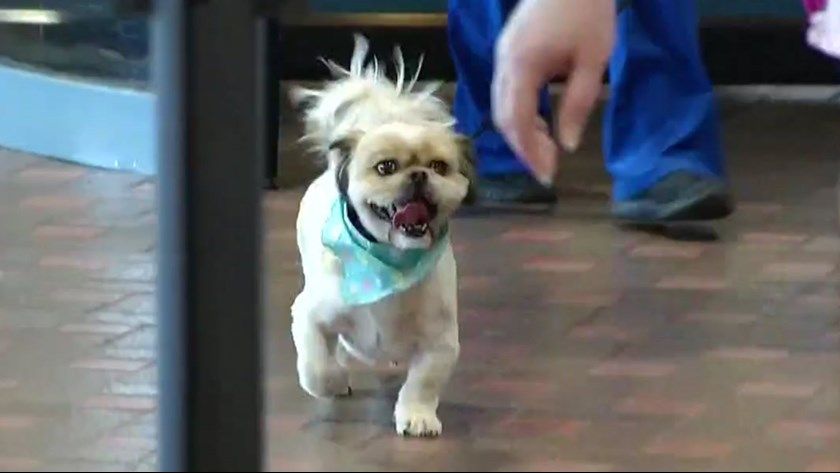 7-year-old dog reunites with family after a long journey. Picture courtesy of 11Alive.com

Losing your dog can be nerve-wracking, even in your own neighborhood. For this Georgia family, it was a nightmare. Their little dog, Pumpkin, ended up 1,400 miles away from home – in New Mexico! Luckily, thanks to a kind woman and the help of a few veterinarians, Pumpkin found his way back home.

Pumpkin had been living happily with Manny and Alexandra Ornelas in Albuquerque, New Mexico. He had a whole family who loved him, and even another furry friend to play with. However, about five months ago their care-free lives took a turn for the worse when the 7-year old Lhasa Apso was stolen from their yard!

The family was heartbroken and searched everywhere, but Pumpkin was nowhere to be found.

Unfortunately, pet theft is all too common – an estimated 2 million are stolen each year. After five months of searching, the Ornelas had almost given up hope — until one day, when they received an unlikely phone call.

Annette Hatt was minding her own business as she headed to the Allatoona Landing Marina. However, she couldn’t help notice a lost little dog who kept wandering by. After inquiring, she found out he’d been hanging around the Marina for a while, with no owner in sight. Concerned for his wellbeing, she decided to take the little guy home with her.

“I love animals,” Hatt told 11Alive. “I’ve actually done fostering a couple of times. Most of the pets I’ve had have been strays or people getting rid of their animals.”

The Search: Supportive Group Cares for Tiny Dog and Searches for His Home

Pumpkin didn’t have tags, so Hatt quickly posted to the Facebook group Furry Friends Lost and Found in Cherokee County, GA, hoping to find the owner.

She wasn’t able to care for the lost dog for long, though. In the meantime, another member of the Facebook group, Kathy Lee Russell volunteered to foster Pumpkin.

With no tags, finding Pumpkin’s family might have been impossible. As it turned out, however, Pumpkin had an identification chip. When Russel took him to the veterinarian, the chip revealed a lot of helpful information. They found out Pumpkin was 7-years old — and his address. Somehow, Pumpkin had ended up over 1,400 miles away from his home in Albuquerque, NM!

Because of all the information contained in the chip, all the loving people who’d helped Pumpkin in Georgia were able to get in touch with Manny and Alexandra Ornelas. What had seemed like a lost cause quickly turned to relief and joy – Pumpkin was alive and well! But how to get him back home to New Mexico?

On Facebook, members of Furry Friends Lost and Found in Cherokee County, GA had a lively debate about how best to get Pumpkin home. Hatt and Manny tossed around the idea of driving, but it would have taken about 3 days! Besides, Pumpkin’s family was eager to see him.

Finally, Manny Ornelas started a GoFundMe page, and the news channel 11Alive even covered the story.

Flying with small dogs is relatively easy. In the end, Pumpkin hitched a ride on a Delta flight to New Mexico.

“I’m really happy that I got him back. I can’t believe that he was that far away from home,” Manny said. “It’s hard to think about what he’s been through.”

After months of separation, Pumpkin and his family couldn’t have been happy to see one another. They ran to greet one another at the airport.

“I was just too shocked. I thought I was having a dream. I mean, I had dreams that I found him, but I didn’t actually think he’d come back,” Alexandra said.

Thanks to a caring group of dog lovers in Cherokee County, GA, and a handy microchip, Pumpkin was able to have a happy ending. Back with his family in New Mexico, he’s making up for lost snuggles and head rubs. He’s also getting to know the newest family member. While he was away,  the Ornelas had a baby girl!