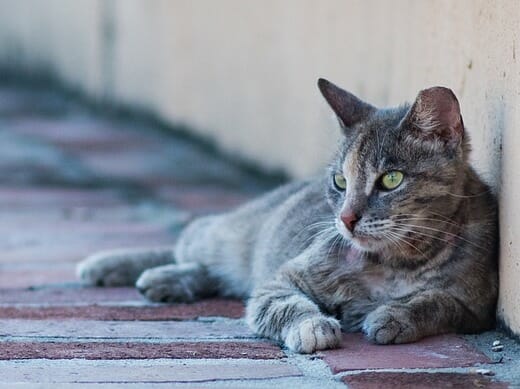 A feral cat basks in the sunshine outdoors. Image via Pixabay.

After more than a decade of having its hands tied, the Los Angeles City Council is moving forward with a citywide community cat program that will allow feral cats to be humanely trapped, spayed or neutered, and released.

The Council in December unanimously approved a plan that involves vouchers to spay or neuter at least 20,000 feral cats caught by volunteer groups each year for the next 30 years.

The City estimates the program will humanely reduce the number of feral cats on Los Angeles’ streets from 342,915 cats to 296,196 cats over the 30 year period.

The city also estimates the spaying and neutering will prevent the births of more than a million kittens over that time, city documents said.

Cat rescues, volunteers, and city residents applauded the passing of the long-awaited program.

“We extend a huge thanks to the City of Los Angeles and to the City Council for their perseverance, vision, and leadership,” said Becky Robinson, president and founder of Alley Cat Allies. “In the years to come, L.A. will be a shining model of the many benefits of nonlethal cat population management.”

Trap, neuter, and release — or TNR — is an approach to reducing feral cat populations through humanely trapping and spaying or neutering cats before returning them outdoors. More than 200 local governments nationwide have established ordinances supporting TNR, and other major municipalities in California — including San Francisco and Sacramento County — support the practice.

The massive number of feral cats within city limits was visible enough to warrant a listing in the Atlas Obscura, a website dedicated to whacky city attractions. But until recently, city leadership hadn’t even been able to mention supporting TNR programs without possibly invoking the wrath of the court system.

The Council first implemented spay and neuter vouchers for feral cat colonies in 2005. But the move met with the ire of several conservation groups concerned about free-roaming cats’ impact on wild bird populations.

Led by the Urban Wildlands Group, a Los Angeles-based nonprofit dedicated to preserving species in urban areas, the groups filed for and received a court injunction in 2010 demanding that the city stop any sanctions of TNR programs until it conducted an official environmental impact study, in compliance with California law.

The city’s Bureau of Engineering opened the issue to the public in 2019, pitching the community cat plan that included TNR vouchers, and received more than a thousand pages of comments from hundreds of people.

The majority, which supported the city’s desire to implement TNR, cited TNR as a humane and cost-effective way to control feral cat populations already living outdoors in the city. Many noted they would prefer that their taxpayer dollars support humane sterilizations rather than euthanasia of animals in overcrowded shelters.

The handful of people who opposed the plan, including the state’s Department of Fish and Wildlife, voiced concerns that the cats would kill wild birds or be killed themselves in car accidents, at the hands of humans, or from starvation or disease. Those opposed also worried that the feral cat colonies would contribute to community disease from fleas or feces and proposed instead adopting the cats out or sequestering them in a cat sanctuary.

In its submitted comments, Alley Cat Allies— a leading organization dedicated to the protection and humane treatment of cats — debunked the disease-borne concerns. The nonprofit noted that adopting out wild cats not conditioned or socialized for human interaction, or foisting them off on overrun shelters and sanctuaries, wasn’t reasonable. The alternatives to TNR inevitably meant death for cats, the nonprofit added.

“This catch-and-kill scheme is not only cruel, but it is never ending and futile,” the nonprofit wrote. “Attempts to remove cats result in population increases as new, unsterilized cats move into the same area and reproduce.”

The City still has some things to figure out, including how to fund the estimated annual $2 million cost for the spay and neuter vouchers.

But many city residents — and even those from other states who have been following the injunctions — are glad the city is back on track.

Julie Crimmins, a New Jersey resident who heard about the injunction through an Alley Cat Rescue newsletter, said she’s glad the city of Los Angeles will once again be funding and promoting TNR.

“If big cities throughout the country embrace TNR as a viable, humane method for managing the feral cat population, it sets a good precedent for many smaller towns and communities to also adopt the practice,” Crimmins wrote in an email to Lady Freethinker. “Because of the sheer number of stray and feral cats, it is really overwhelming for individuals and small rescues to do TNR on their own.”