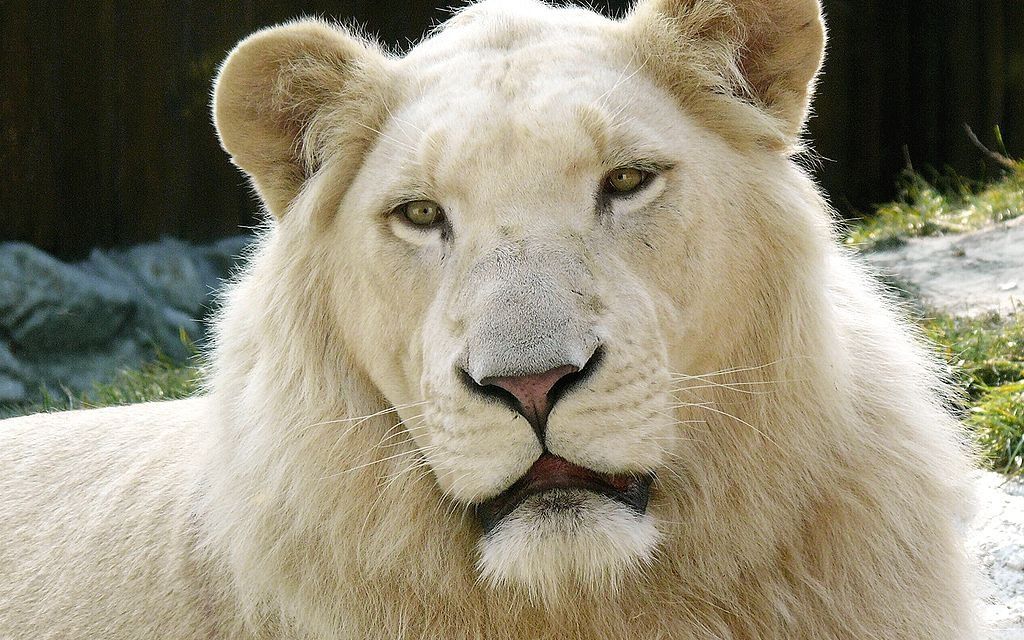 A group of lions mauled 12-year-old Nkalemelo Latha to death after a worker led him into a lion enclosure at Otavi Wildlife Sanctuary near Parys, South Africa on August 12th. This killing brings new attention to the dubious wisdom of keeping lions and other wildlife in captivity, given the repeated incidents of maulings and deaths of both humans and animals.

A park worker stole the keys to the lion enclosure, leading the boy in

An orphan, Nkalemelo lived with his guardian, the farm supervisor at Otavi. A park worker known as Rasta allegedly stole the keys from the main office and took Nkalemelo into the lion enclosure. After walking about 60 meters in, the boy was reportedly attacked by the lions.

“The reason for him doing this is still unexplained as all enclosures are properly fitted with feeding areas and ways of ensuring water at all times for the lions, thus ensuring that one would not have to go into the enclosure for such purposes,” claimed Group CEO of Otavi Lion Sanctuary Louis Pulzone in a public statement on Otavi’s Facebook page.

Pulzone’s statement came amidst a flurry of criticism by conservationists and animal advocates concerned about the so-called “sanctuary’s” treatment of wildlife.

“It is an absolute tragedy that Nkalamelo Latha was killed by lions at Otavi Game Lodge outside Parys in South Africa – a park that is notorious for cub petting and trophy hunting,” Julie Middlekoop, head of the Wildlife – Not Entertainers campaign at World Animal Protection said in a statement. “Sad events like this must be prevented. The government should not allow these places to exist, and tourists should not visit them. We must keep wildlife in the wild – not use them for our entertainment.”

Animal rights charity FOUR PAWS South Africa also slammed Otavi Lion Sanctuary and the conditions that led to Nkalemelo’s tragic death. In a Facebook post, they stated that Otavi is not a true sanctuary because it allows interaction between the animals and the workers and tourists, does not have adequate safety measures, does not sterilize its animals, sells lion cubs online, and offers hunting packages. 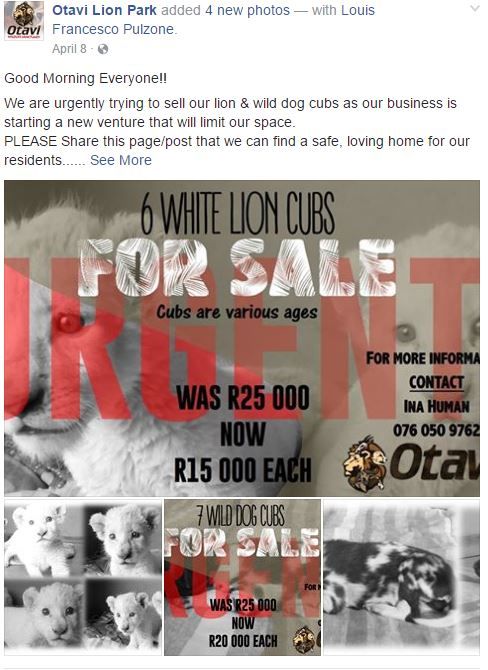 Canned hunting — hunting animals in enclosed areas — has come under increased scrutiny in recent years, and a recent documentary, Blood Lions exposed how this issue affects lions specifically. According to the film, about 8,000 predators are confined or kept in cages, and FOUR PAWS estimates that 6,000 lions live in 200 breeding farms in South Africa alone. While not all breeders provide hunting packages, they often sell their predators to hunting facilities or for use in traditional medicine in Asia.

Recently, governments have taken action to discourage this kind of big game hunting – in 2015, both Australia and France stopped issuing permits to import lion trophies. Even the Professional Hunter’s Association of South Africa is against canned hunting, which hasn’t been beneficial to conservation.

Pulzone responded to the criticism by claiming that the facility only sells lion cubs to “approved institutions,” and denied using the grounds for canned hunting or “breeding of any kind of animal for personal gain.”

Although Pulzone accused activists of trying to “create sensation” during this time of tragedy, it’s hard to dispute the fact that Otavi does indeed offer game hunting as an attraction and puts people in close contact with animals. 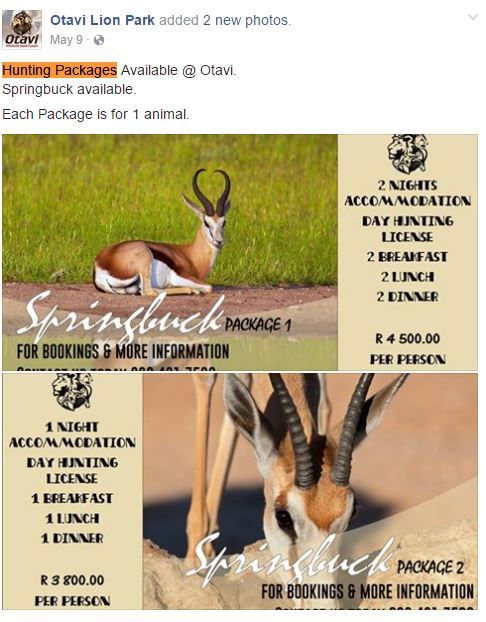 Screenshot of Otavi advertising a hunting package on its Facebook page

“We urge tourists planning to visit Otavi Game Lodge to think twice and learn the facts before they visit,” Middlekoop urged. “Once people know the truth, they can help to end cruelty by avoiding wildlife entertainment attractions, and choose to see wild animals in the wild, where they belong.”