As part of Lady Freethinker’s Defeat Dog Meat campaign to save dogs and cats from the horrors of the meat trade, we have posted a new bus stop ad in China.

The ad is strategically placed in the city of Shenyang’s Xita district — an area notorious for cruel dog meat restaurants, where stolen pets are thrown into cold, cramped cages, often tortured, and then brutally killed.

The ad, which lights up at night, translates to: “Dogs are family not food.” 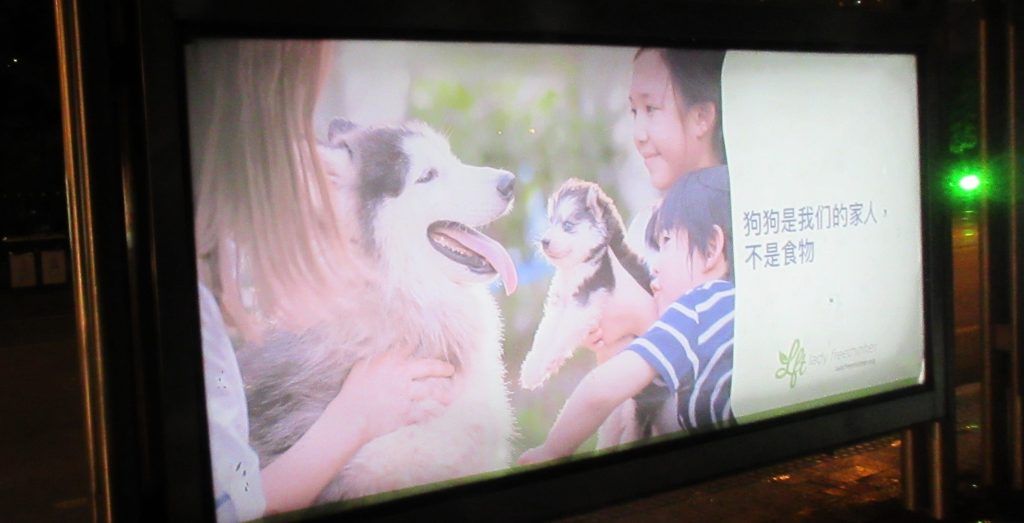 An estimated 20 million dogs and 4 million cats are slaughtered for meat each year in China. Many are pets stolen from their loving families, with collars still tied around their necks as they’re sliced open at the slaughterhouse. Others are strays shot with poison darts and grabbed from the streets by criminal gangs.

The dogs are often tortured mercilessly before slaughter in the cruel belief that the adrenaline makes the meat taste better, or provides some sort of health benefits. They may be beaten, electrocuted or burned alive.

Thousands of these innocent dogs die each year at the gruesome Yulin Dog Meat Festival, an annual “celebration” of the summer solstice in Yulin, China. LFT is actively fighting to shut down this barbaric event, and rescued 24 dogs from slaughter at Yulin last year.

In collaboration with Save Korean Dogs, LFT is also running buses in Gimpo, South Korea, the only nation with large, factory-farm style dog meat farms:

Message translates to: “Dogs are not food but family,” and “Please do not eat me.”

And our previous ads in Jeonju, S. Korea, galvanized people to action: “Dogs are not food but family. Let’s save them together.”

Lady Freethinker will continue fighting to save dogs and cats across Asia from the hands of butchers. You can help by adding your voice: