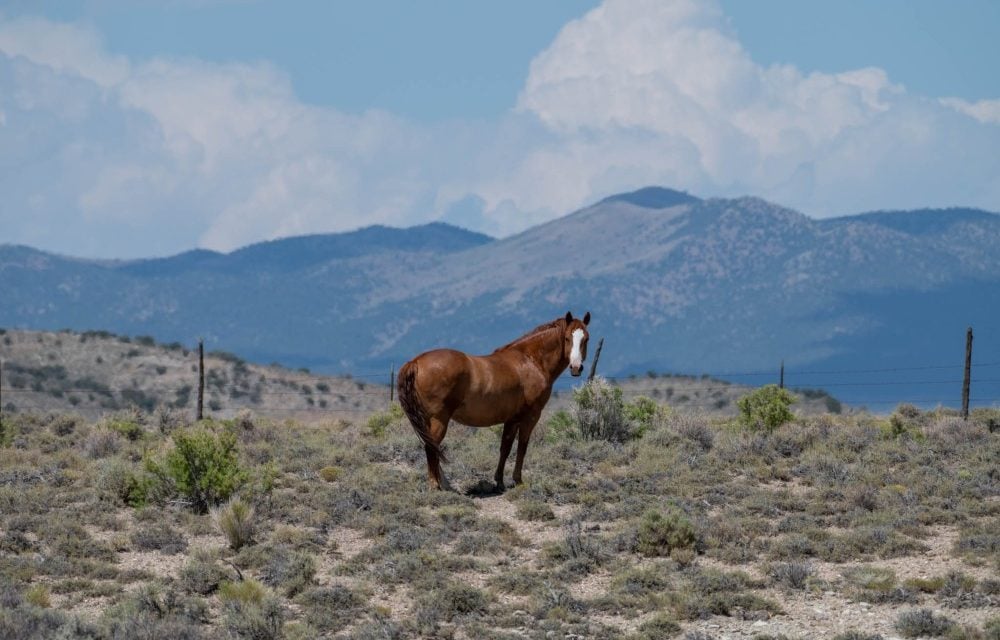 Already, four wild horses have been killed as a result of a wild horse helicopter roundup in the Triple B Complex in Nevada – and a Lady Freethinker observer was there to bear witness.

The Bureau of Land Management (BLM), the federal agency tasked with managing populations of wild horses and burros in alignment with federal welfare mandates, started the roundup near Ely, Nevada, on July 17.

As of Wednesday, a contracted helicopter operator had driven 179 horses – including 57 stallions, 87 mares, and 35 foals – away from their homes and into the BLM’s temporary holding corrals.

Of those horses, 118 already had been shipped off-site, according to the BLM’s daily gather reports. 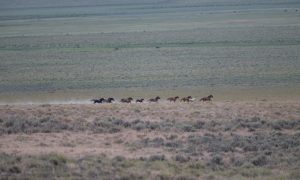 On Wednesday, July 20, a 2-year-old mare also died unexpectedly after being driven by the helicopter toward the corral. A necropsy report ruled she had died from respiratory pneumonia and compromised lungs, according to the gather report.

Lady Freethinker’s observer told us on Tuesday that the BLM decided to move public viewing nearly 1.5 miles away from the corral for the next day.

Our observer also was at that same site – nearly two miles away from where the horses were being herded into the corral – on Wednesday.

The BLM told Lady Freethinker that the observation site moved because the trap site moved.

“The BLM began gather operations at a new trap site on July 19. Whenever a trap is moved, the BLM typically establishes a new observation area,” the agency said via email. “The number one priority of the BLM when selecting public observation sites is to ensure the safety of the operation and those viewing it; the site is also selected so as not to disrupt gather operations or place undue pressure/stress on the animals or the operational personnel.” 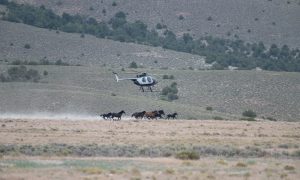 Although that distance made it difficult to see what was happening, our observer had brought binoculars and also a zoom lens – and was able to see enough.

“The pilot has been running the horses very hard, for a long distance due to the trap location and the heat,” he said, on a day where the gather’s high reached 95 degrees Fahrenheit. “From our location, it’s extremely hard to see what’s going on but at least one horse stopped running from the helicopter due to exhaustion.”

“You could tell the helicopter was causing stress in the horses,” the observer added. “A lot of times when you think of a roundup in Nevada, you might think of open plains. But this was mountainous terrain. The pilot was driving the horses down from the mountains, with some running for 35 to 45 minutes.”

Our observer also heard that a foal was separated from her family by the helicopter, and that officials lost track of her and were trying to locate her. A lightning storm that day caused operators to pack up quickly, and the observer was not aware of whether the foal was ever found, the observer added.

The BLM said in an email dated Monday, July 25, that “All foals that were part of gather operations on July 19 have been accounted for and are doing well.” 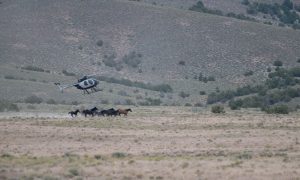 The BLM did not immediately respond to media inquires about this gather prior to publication of this story; we will update this story as more information becomes available.

“One horse was killed near the trap,” our observer texted mid-day, given the spotty cell reception in the remote area. “I witnessed it through my binoculars. Sixteen horses went into the trap, and one missed the trap and kept running for a few meters and then just fell over. Six of the wranglers on foot and two on horseback hurried over… they then pulled the truck in front of it and backed up a trailer to conceal what was happening to the horse.”

The BLM told Lady Freethinker that euthanasia of sick, lame, or injured wild horses can take place via three approved methods: an injection of a lethal dose of a barbiturate derivative, such as sodium pentobarbital; a gunshot to the brain of the animal; or a penetrating captive bolt shot to the brain of an animal.

“The most common method for euthanizing gathered animals in the field is by gunshot to a restrained animal, which is instantaneous and avoids concerns about drug residues in the environment,” the agency added.

Our observer, who spoke to the BLM officer on site, was told that the wild horses, after their traumatizing ordeal of being rounded up, were shipped first to a ranch nearly 40 miles away, then would endure further travel to a long-term holding facility elsewhere. 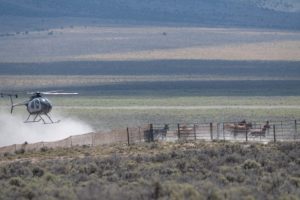 The BLM’s website says the wild horses will be transported to the Indian Lake Off-Range Wild horse and burro corral in Fallon, Nevada, or to the Sutherland Off-Range corral in Sutherland, Utah.

The Triple B Complex, within the Elko and White Pine counties, contains the Triple B, Antelope Valley, and Maverick-Medicine herd management areas.

An estimated 3,475 wild horses roam that massive area freely — a number the BLM wants to reduce to between 482 and 821 wild horses.

For this specific roundup, the BLM’s aim is to gather 1,900 wild horses and permanently remove 1,800 horses from the range, according to its website.  There also are plans to treat 100 mares with the GonaCon vaccine — an injection to make the horses infertile — and return them to the range, although no mares have been treated to date, according to daily gather reports. 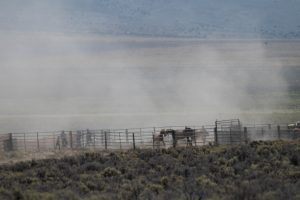 The BLM says on its website the gather is necessary to prevent degradation of public lands and ensure there is enough water and forage for the horses.

“The BLM estimated there were 3,475 wild horses in the Triple B Complex as of March 2022, which excludes foals born this year,” the agency said via email. “The Appropriate Management Level for the area is 482-821 wild horses. The overpopulated herd is degrading the land’s resources and increasing the risk of starvation and thirst. By removing excess animals and finding adoptive homes for them, the BLM can help protect the overall health of the herd by balancing herd size with what the land can support in the long-term.”

A Lady Freethinker analysis of 20 helicopter roundups last year revealed that at least 245 wild horses died as a result of the roundups – including at least 33 who died specifically from gather-caused injuries, including broken bones, snapped necks, lacerations, and unexpected heart failure. 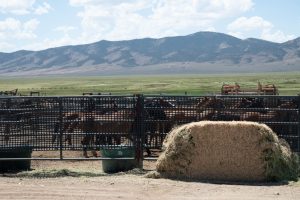 We sincerely hope that no more wild horses will die this year – killed because of pre-existing conditions or because their panic and distress over being chased by a loud, low-flying machine caused them to crash into the corral or holding panels.

But a collective 44 horses died during helicopter roundups in 2018 and 2019 in the Triple B Complex — so it’s likely that more innocent horses will soon also be dead.

We thank our generous sponsors and donors who have made it possible having an observer at the roundup — we will keep watching!

The BLM must find a better solution than inhumane helicopter roundups to “manage” these iconic, protected wild horses! 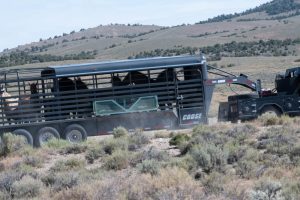 If you haven’t already, please sign our petition urging the BLM to halt this inhumane method that separates horses from their herds and leads to fear, panic, injury and death.