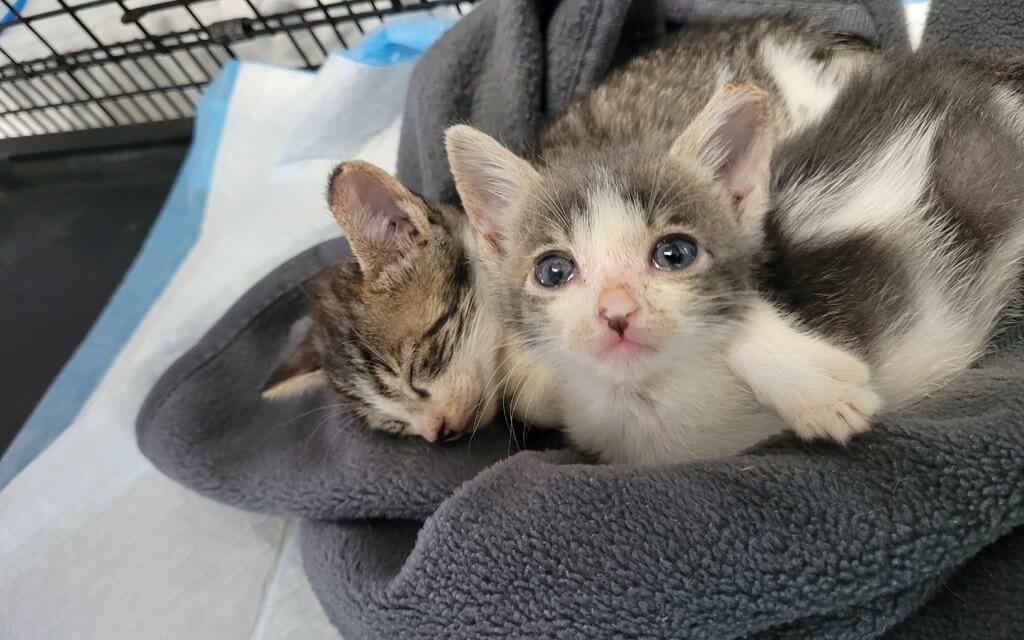 Editorial Note: This is part of a series highlighting recipients of Lady Freethinker’s new Urgent Need Fund grant program, created to help nonprofits working to rescue or care for animals or raise awareness to improve the way animals are treated. Learn more about the program and how to apply here.

Laurie Mosher first fell in love with the tiny, largely undeveloped island of Vieques, about six miles off the mainland of Puerto Rico, as a tourist.

But one house-in-construction and one stray beach dog later, she ended up a permanent resident. She’ll tell you that the island’s beauty and peace drew her in, but the roaming packs of seriously injured, ill, and starving beach and street dogs are what made her stay.

Mosher and Laura Cohen co-founded Our Big Fat Caribbean Rescue (OBFCR) in 2017 with a mission to improve the lives of Vieques’ animals by providing free spay and neuter and nonprofit vet clinics.

The island has some formidable challenges, with no hospital, inconsistent ferries, an affordable housing crisis, and food insecurities. The people, about 77 percent of whom live in poverty, also are used to groups jetting in and promising help and then disappearing without following through, Mosher said.

But OBFCR has built trust with the local residents, to the benefit of both people and their companion animals.

“We believe that helping an animal helps a person, their family, and their community,” Mosher said. “Recognizing that stress and scarcity of resources leads to animal neglect and surrender, we support our neighbors in providing a safe, humane circumstance for their pets.”

Already the small team has safely sterilized more than 4,000 of the island’s animals, seen hundreds of dogs and cats in need of medical care, knocked on 400 doors, and taught over 50 youth through a humane education program. They’ve talked with families who used to keep their dogs chained but now keep their dogs on lightweight tie-outs, with new collars and dog bowls. They also offer preventative care, like flea and tick treatments, when resources allow, along with first aid and food.

One of the biggest obstacles for OBFCR has been finding — and keeping — a qualified veterinarian willing to fly to the island from the mainland to conduct the bi-monthly vet clinics, which Mosher said are always booked full.

Lady Freethinker awarded OBFCR a $10,000 grant through the Urgent Need Fund program to offer the island’s residents an extra two clinic days each month for the upcoming year.

These grants are only possible through the generous support of our readers and donors; we could not have helped these precious animals without you!

The following Q&A combines OBFCR’s grant application and an interview with Mosher. Answers have been edited for length. To learn more about Our Big Fat Caribbean Rescue, please visit their website here!

A Q&A With Laurie Mosher, Co-Founder of Our Big Fat Caribbean Rescue

Tell us about the start of OBFCR.

I am from Canada. I wanted to go on vacation somewhere warm, and I went to Vieques. I liked it so much that I decided to build a house. On the second or third visit, two dogs came into the construction site. One was too sick and had to be euthanized. The other, J. Edgar, I wanted to bring home. The building manager offered to take care of him while I got the paperwork in order. I didn’t know it then, but that was the start of Our Big Fat Caribbean Rescue.

You’ve changed the way you approach animal rescue since your founding.

We used to fly dogs out north to adoptive families. Then Hurricane Maria hit. By the time we got the dogs onto the plane, there had been hundreds more born. Although flying the dogs out got attention and made for great headlines, we realized it was completely unsustainable. The problem was created here, and the solution would be found here. We couldn’t keep shifting the problem northward. So we shifted to outreach, the spay and neuter clinics with vet care, and the pet food bank.

Have you seen a noticeable difference from your efforts so far?

When we started in 2017, there were roaming packs of dogs on the streets and beaches and colonies of cats. You don’t see that now. We’ve reached a tipping point where people don’t want roaming packs of cats and dogs.

The people of Vieques now recognize our white truck and know who we are. When there is an animal in need, they call us. If they see an intact dog walking past their house, they call us. That wouldn’t have happened five years ago.

We do have our work cut out for us still. There is still breeding happening because the puppies are a source of income. We have convinced some of the breeders to spay and neuter their animals. So there are still some pockets of resistance, neglect, and abuse, but we’re working on them. We also do have people in the community who want to see animals sterilized because they see the benefits, and they want to see other animals helped. 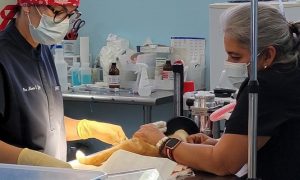 Tell us more about your “pay as you wish” clinic system.

We offer accessible vet services through client donation and free spay and neuter services. People often give up their pets for easily treatable ailments, like ticks or ear infections, or because they are unable to afford pet food.

Because people don’t have money for sterilization, our goal to be sustainable is to offer free spay and neuter services to stop unwanted litters, and the abuse and neglect that could follow. It’s the only real solution, but it’s also the most affordable and most humane.

People often give us a few dollars or what they can. We had a woman who arrived for a clinic day at 5 a.m., although the veterinarian didn’t arrive until 8 a.m, because she really wanted to have her two cats done. We noticed she had a little Chi mix who had been attacked by an iguana, so we treated those wounds. The woman was thrilled, but told us she didn’t have any money. She said, “I’ll stay here and help.” She stayed at the clinic and helped mop and clean cages until her two cats were sterilized, and then she took them home. She turned up the next day to thank us; she was just that grateful. 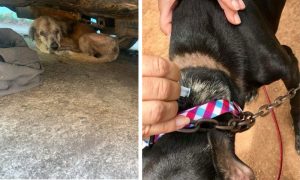 So if you notice suffering animals during the spay and neuter clinic, you help them — and find a way to educate their guardians.

We have had dogs who come in for vaccinations and are in bad shape. We try to be nonjudgmental. We try to be kind. A lot of times, the people just don’t know.

We had one person bring in a dog who had engorged ticks, and he didn’t know what they were because they had always been there. We explained, and showed him how to handle the situation, and he did. When he came back, his dogs were clean.

It’s situations like those that have to be done one-on-one. For the most part, everyone wants to have a healthier, happier animal, and they’re happy to do it if we can provide solutions. 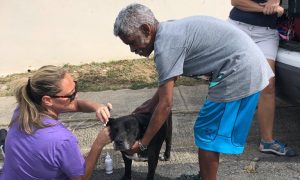 What helps you through the bad days?

If you would have told me when we started what was going to happen, I think I would have crawled under the bed. It’s so much time, money, and effort, and you can’t carry the burdens of a small island on your shoulders and not get fatigued.

But we love what we do, and we are making a visible difference. We’re dedicated to the mission. We’ve never strayed from that. We can get very tired and discouraged sometimes, but we focus on our mission. We have expanded a hundredfold since we’ve started, and we just need to keep going. 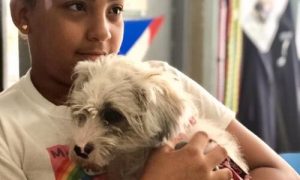 What would you like LFT supporters to know about what this grant means for you and the animals?

We fly our vets over from the main island, and it’s because of their willingness to travel to Vieques that we are able to offer this program. Despite the unreliability of our ferries, their home and professional commitments, storms, and even a pandemic, they have not hesitated in their dedication.

It just so happened a new vet, who specializes in shelter medicine, had decided to come. She was a great fit. So we had a vet, but we needed the money to fly her over and pay her salary. I was turning the lights off in the clinic, and your email came through. I said, “We just got this grant from Lady Freethinker,” and we were all so happy! We texted our new vet and said, “When can you come back?”

We had a vet, she wanted to come back, and you gave us the ability to do that. Because of this grant, we can fly her over twice a month to provide continual vet care. The timing was magical. We want to thank you for recognizing the work we do in Vieques and helping us continue it!