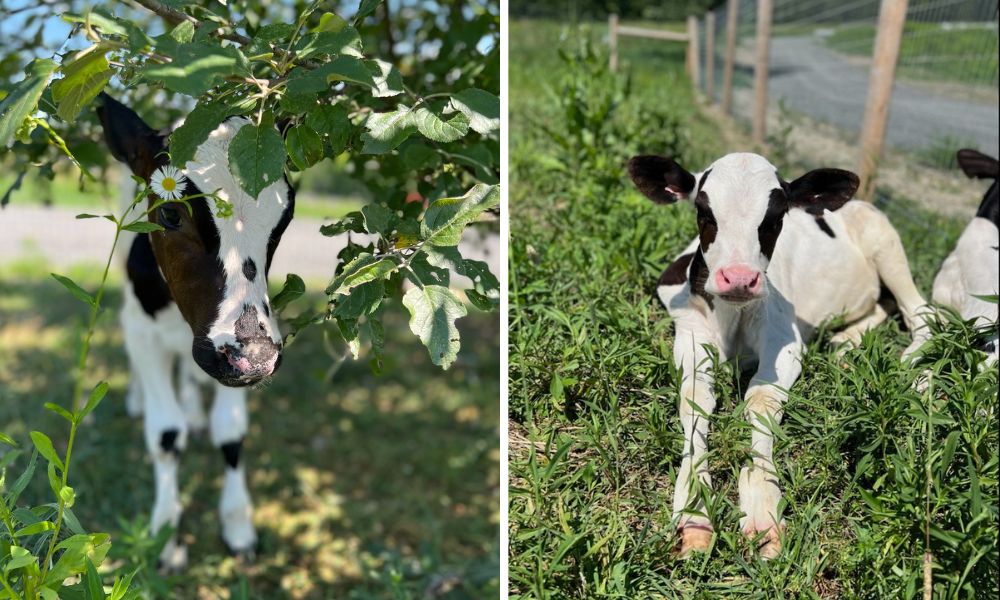 The Happy Compromise Farm + Sanctuary (HCF+S) heard about twin baby cows needing a good home in a sanctuary group on social media and immediately knew they needed to help.

The timing wasn’t ideal. The sanctuary — which cares for more than 100 farmed animals including cows, birds, goats, sheep, alpacas, and more — had moved in September 2021 from wildfire-prone Oregon to their new 53-acre property in Waverly, New York.

While the animals have settled in since that trek, Eryn and sanctuary co-founder Oliver Gawlik have had to rebuild their sanctuary from scratch. They didn’t immediately have a place to quarantine the baby cows for 30 days, which is done for all new arrivals to protect existing residents from any infectious disease. They scrambled and obtained funding for a quarantine shelter.

Then they took the leap — knowing full well that the 1-month-old babies would soon outgrow that temporary holding area and need a new, permanent shelter to call home.

“We were their only hope for sanctuary,” Eryn wrote to Lady Freethinker earlier this year. “This is an urgent need, and we are running out of time.”

Lady Freethinker was touched by the story of the two sweet cows — Titus, the slightly more outgoing calf, and Tabitha, a shy but friendly heifer — and awarded HCF+S a $10,000 grant through the Urgent Need Fund program to construct a permanent shelter in which the twins can grow up.

The twins recently enjoyed their first snowfall at the sanctuary and are doing great, HCF+S said in a recent Facebook post.

“Thankfully, they were generally unfazed. As long as there’s hay and they’re together, the twins are happy babes,” the sanctuary wrote. “Now 5 months old, these two beat the odds.”

The Urgent Need Fund grant program would not be possible without the generous support of readers and donors; thank you so much for making this new shelter possible for these darling cows!

The following Q+A combines HCF+S’s grant application and an interview with Eryn Leavens. Answers have been edited for length. To learn more about HCF+S, please visit their website here. 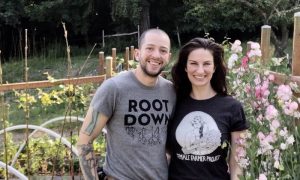 How will you spend the grant money?

The twins need a permanent structure to grow into once they are big enough. The new shelter is a 10′ x 20′ open shelter. The bottom of the shelter will need to be covered in gravel so it drains and can be easily cleaned and bedded. We’ll need a load of sand to cover the gravel and make it softer for the cows. The front of the structure will arrive open, and we will be installing solid wood doors on half of it. The other side of the structure will have vinyl flaps instead of solid doors so more timid cows can pass through without feeling trapped.

Tell us more about the twins, Titus and Tabitha!

They were born on a small dairy farm in Massachusetts. They were separated from their mom early, so the dairy could take the milk. When we got them, they were tiny and terrified. They stayed glued to each other and wouldn’t separate at all.

They are 6 months old now, and Titus and Tabitha are inseparable! They love playing, and they jump around their paddock. They are still wary of strangers when we do tours, but they’re excited when they see us. They know we bring them hay! They love being brushed, and they have huge personalities. Titus is a little braver, and Tabitha is more cautious. 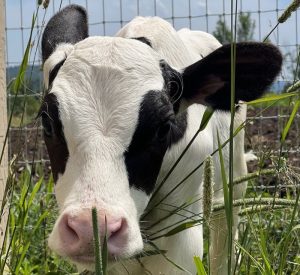 You have another famous cow resident with a big personality.

[Laughs] Miriam has a worldwide fan club. She was a cow living in the woods. The seller of the property ran a meat CSA (Community Supported Agriculture) and couldn’t get her in the trailer because she was feral, so she came with the property. We are slowing working up to her being able to be more comfortable. We were able to pet her for the first time about two months ago. Her story of evading slaughter and awaiting sanctuary has resonated with a lot of people.

The last time my mom came to the sanctuary, Miriam actually licked her hand. It changed my mom; she stopped eating meat and dairy.

Have you noticed similar reactions for sanctuary visitors who are meeting farmed animals for the first time?

There is a lot of joy. When we’re kids, most people have so much love for animals. I don’t know what happens in the middle, between childhood and adulthood, but it’s really fun seeing people find that much joy again in meeting animals. You can see this light in people’s eyes when they see these animals.

Is there anything else you’d like people to know about cows and their personalities?

I don’t think we give animals the freedom or the comfort to be themselves most of the time. At slaughterhouses, cows have to do what they’re told to do every day. At sanctuaries, it’s not like that. Sometimes it takes a long time to see an animal’s personality because they are wary of us.

We have had babies born here, and all they have ever known is love and freedom. They are nothing like their parents, who have been rescued from these horrible situations. Animals have to be very comfortable with you and their surroundings to show their personalities. 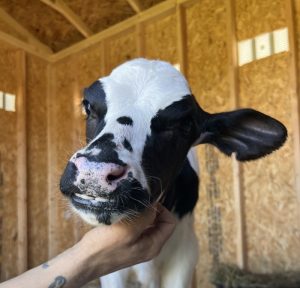 Your mission also includes advocating for traumatized or marginalized groups of people, including the LGBTQ community.

We have always been focused on minorities. Now, we live in such a rural area; most of the people have lived here for generations and passed down similar perspectives. If you grow up not seeing anywhere you fit in, or where you can be your full self, or if you don’t look like anyone else, you don’t always know what you can become.

In Oregon, we ran an Airbnb, and we’d give away weekends to people who couldn’t pay but needed a break from the city, to be in nature and reset. It was nice to hear the feedback; they felt like they could take a deep breath. We want to continue that here eventually. We’re also hoping to help show people how to grow food, since we live in a food desert, and to give food to people using a “take what you need, pay what you can” farm stand.

We want everyone to feel safe here, including us. When you have a strong message you want to get out there, that can be hard.

How do you approach talking about veganism?

My partner Oliver was not vegan when we met. Back then it didn’t phase me, although it probably would now. One night, he was explaining his view on eating meat and dairy, and about animals being humanely raised and humanely slaughtered. I said, “There is no such thing as humane slaughter,” and that stopped him in his tracks. He realized he had been wrong about something we’ve been told all the time.

When it comes to our sanctuary, you have to be careful about how hard you push. You want people to see how happy the rescued animals are, and you don’t want to scare people away. Where we are there is a natural opening, because people ask what we are doing, because our sanctuary doesn’t look like the other farms here.

For me, it’s about choosing compassionate options, and we live in a time when there are so many.

You mention on your website that the sanctuary will be a permanent home for most of your residents.

I think we have always thought that taking in animals and offering them a forever home was the best fit for us as a sanctuary. It means we have to say no a lot. But our animals get to stay with their family and friends. For me, there are two main considerations. The first is space; you have to have the same amount of space, so I would rather take animals in for life. Also, it’s so hard to trust people with farmed animals. I have heard horror stories about animals being adopted out and slaughtered. It’s much more normalized for people to adopt companion animals.

We are not a shelter. We are a sanctuary. I don’t think the goal of a sanctuary has to be to take in a ton of animals. We will help coordinate if we hear of animals who are in need of a safe home, and we don’t have the space.

Our supporters and sponsors are so important to our mission, and they connect with our animals over the long-term. If they aren’t able to have that bond with a specific animal, I don’t think there would be as much of an impact in terms of getting them to re-evaluate some of their choices.

What would you like LFT supporters to know about what receiving the Urgent Need Fund grant means for you and the animals?

When I opened that email from Lady Freethinker and heard we had received the grant, I think we cried. We were so relieved. We really needed a cow shelter.

In the past two months, funding has plummeted due to inflation and recession fears. Running a sanctuary is insanely expensive. The Lady Freethinker grant took this enormous weight off of us in allowing us to give the animals what we promised them and what they needed.