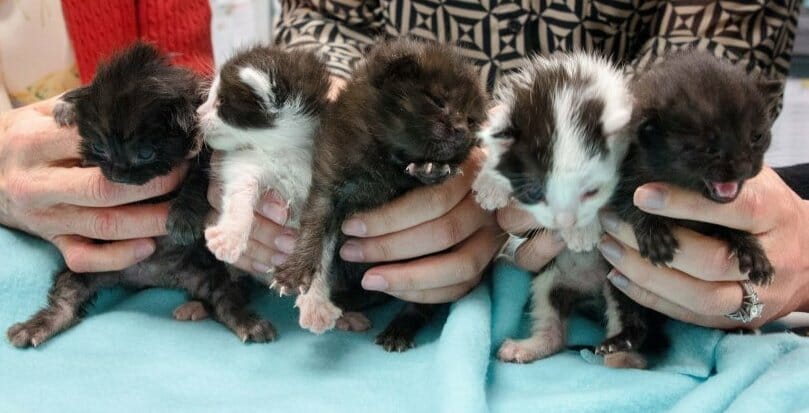 A five-week-old litter of kittens miraculously survived a 500-mile journey as stowaways inside a construction column that traveled from Hayward to San Diego, California.

Workers from DPR Construction were placing the 60-foot column at the new Kaiser Permanente medical offices being built in San Diego when they heard meowing from inside the column.

The kittens were too far inside the column for the workers to simply reach in and retrieve them, and they weren’t able to lure the kittens out with food, either.

Finally, using a crane, the workers gently tipped the column, and the kittens slid out. Someone contacted the San Diego Humane Society, who rushed to the scene as the workers scrambled to collect the kittens. The adorable rescued stowaways were then admitted to the Humane Society’s Kitten Nursery.

The kittens had gone at least two days without food or water, according to the construction crew. Luckily, all the little felines survived, and are reportedly thriving in foster care. They’ll be available for adoption once they’re eight weeks old. So far, two of the rescue crew have expressed an interest in providing a kitten with a forever home.

The mother of the litter, which consists of two females and three males, probably chose the column as a safe place to give birth, but when the column was loaded onto a truck for its journey to San Diego she became separated from her offspring.

The kittens would have remained trapped inside the column after it was installed if the workers had not heard their frantic meowing. Thanks to the diligence of the construction crew, the kittens’ life-threatening journey ended safely.