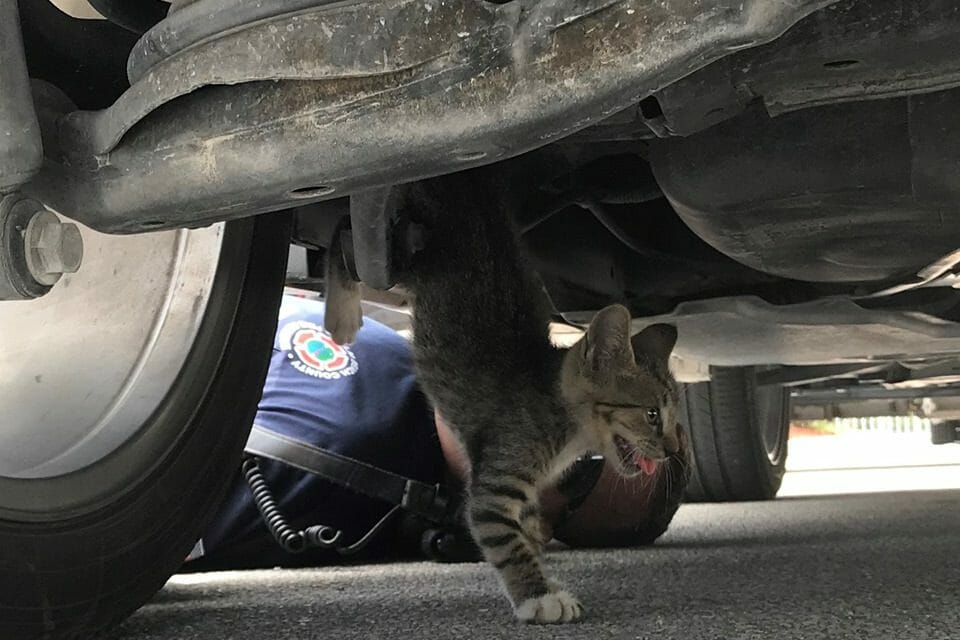 On Wednesday, firefighters in Palm Beach County, Florida, were summoned to the scene of what they later called “a very unique rescue,” where a kitten was trapped in the rear axle of an SUV.

With the firefighters’ help, the frightened animal was freed. The rescuers provided the overheated kitten with fresh water and helped find the feline a forever home.

The heroic event was detailed in a Facebook post on the Palm Beach County Fire Rescue’s official page, along with photos of the adorable kitten being rescued.

Kittens are inherently curious creatures who like small spaces, and they sometimes live up to their reputation by getting into situations that require professional rescuing, as evidenced by frequent headlines about fire departments aiding trapped felines.

On Thursday morning, firefighters from the St. Tammany Parish Fire Department in Louisiana extricated a kitten from the fender well of an SUV. The kitten was given a forever home by Fire Captain Larry Martin, who stopped at the pet store for supplies on his way home and surprised his daughter with her new friend.

Last Saturday in Merritt Island, Florida, Brevard County firefighters rescued a litter of kittens from the engine compartment of a car. Luckily, the kittens were unharmed.

As you can see, it’s actually quite common for cats to get trapped in cars. This is usually because they are attracted to the engine’s warmth or because the car’s undercarriage is an inviting place to hide.

However, not all felines who get stuck in cars are as lucky as those detailed in this article, and if you park outside, it’s important to be mindful of the possibility of cats making their way into your auto’s inner workings.

Of course, cats find plenty of other places to get stuck, too: In April, firefighters from the Brookville-Timberlake Volunteer Fire Department in Campbell County, Virginia, freed a kitten stuck inside of a storm drain; and earlier this month, a cat was safely removed from inside the walls of a Washington, D.C. home.

A great big “thank you” to the heroic firemen taking the time and care to rescue these felines in distress!