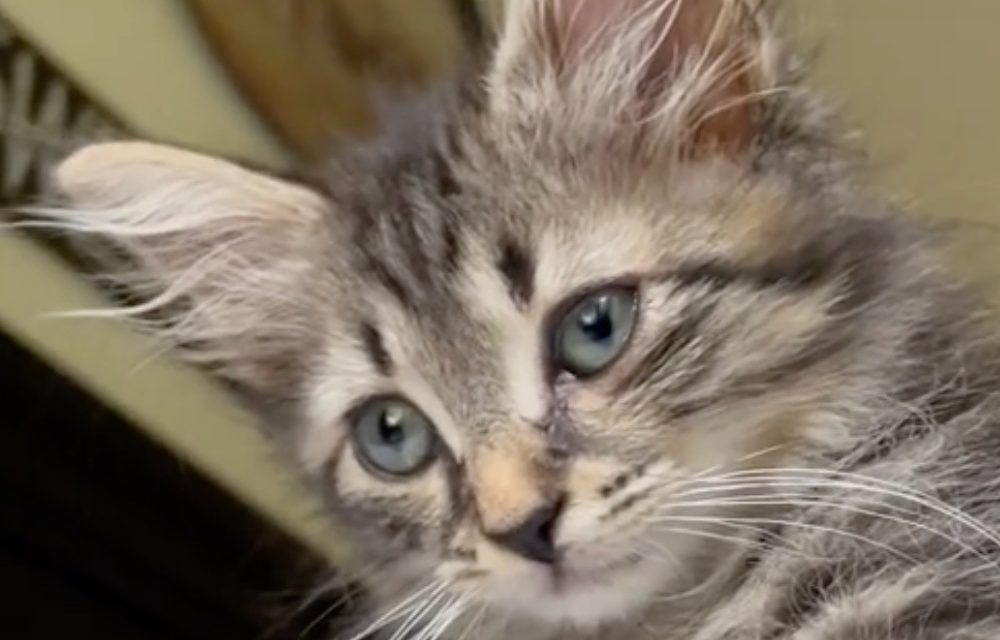 An adorable tabby kitten has a loving new home thanks to the sharp eyes and compassionate spirit of a woman in South Carolina.

The kitten, now named Tony, was mewling by the side of a road when Lisa Kieffer came along and rescued him, Newsweek reported. Kieffer rushed to pick up the trembling young feline, whose big blue eyes were ringed with dried discharge. She posted a video of the rescue on TikTok, where it went viral — garnering millions of views.

She took the kitten home, bathed and fed him. She reported that he had a broken tail and an eye infection. But with some TLC, Tony started doing better, getting bigger every day and enjoying playtime with another rescued kitten called Mac, Newsweek reported.

The tiny kitten now appears to be thriving and happy, according to other videos posted to the account.

“When people ask how that kitten I found on the side of the road is doing….he’s survivin [sic]!” Kieffer wrote on a TikTok update showing a very contented Tony enjoying an affectionate head-and-ear massage from his newfound pet parent.

The videos resonated with viewers, who gushed over Kieffer’s compassionate action.

“Tony is living his best life thanks to your good eyes and big heart,” a TikTok commenter aptly observed.

“He is and I’m so happy that I was the one to find him,” Kieffer replied.

In the comments, Kieffer said rescuing Tony upped her total cats to 12.

While Tony’s uplifting rescue is an inspiring story, sadly circumstances don’t turn out that way for far too many animals that deserve loving homes.

The animal welfare organization Best Friends reported that 87,604 cats and dogs were rescued in South Carolina in 2021 and 7,169 were euthanized, according to Newsweek. The Charleston Animal Society called the situation facing South Carolina animal shelters “a state of emergency,” noting that almost every shelter is “at the breaking point.”

We encourage our readers to visit their local animal shelters whenever seeking out a companion animal. Adopting saves lives!