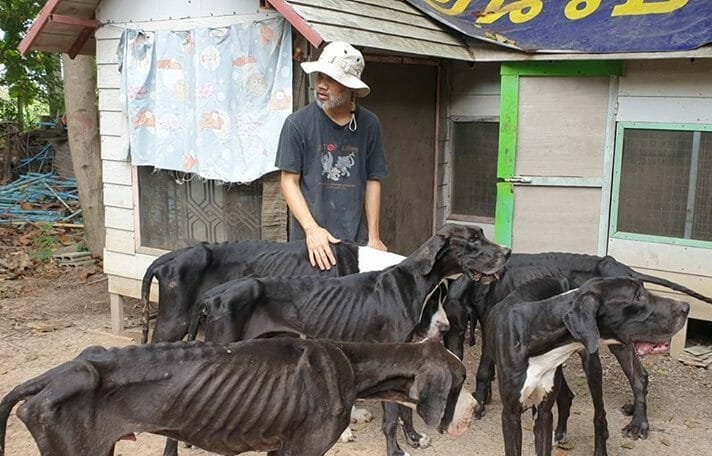 The King of Thailand has adopted 13 recently rescued Great Danes and is covering the costs of their medical care after a viral Facebook post caught his attention.

The abandoned dogs were rescued in late August from a home in the Lat Lum Kaeo district of Pathum Thani Province by volunteers from the animal rights organization Watchdog Thailand. The organization received information of neglect and squalid living conditions from a relative of the dogs’ guardian, who felt compelled to make contact after a mother and her two puppies tragically died.

A caretaker who was at the house when authorities arrived explained that the woman who bred the dogs for sale abandoned them due to financial issues. Put simply, she had trouble selling the dogs, ran out of money, and left them at the home, locked in cages and without food.

While it’s unknown how long the dogs went without eating, they appear skeletal in photos posted on Facebook by Watchdog Thailand.

After seeing the photos, King Rama X announced plans to adopt all 13 dogs. Shortly thereafter, animal husbandry officers from the Bureau of the Royal Household, along with the department’s director-general, Somchuan Rattanamangkhalanon, picked the dogs up from the livestock office.

They’re currently being cared for at Kasetsart University’s animal hospital, where they face several more weeks of recovery. Overall, the dogs’ health has improved since their rescue. Due to physical weakness caused by prolonged malnutrition, however, three of the dogs still require special care, according to Somchuan.

After the dogs recover, they’ll be relocated to the Bureau of the Royal Household’s dog daycare center.

An investigation is ongoing and the breeder will likely face animal cruelty charges, according to Sorawit Thanito, director-general of Thailand’s Department of Livestock Development (DLD).

In light of these recent events, the DLD urges residents of Thailand to be vigilant about animal cruelty and to report it through the department’s DLD 4.0 smartphone application.