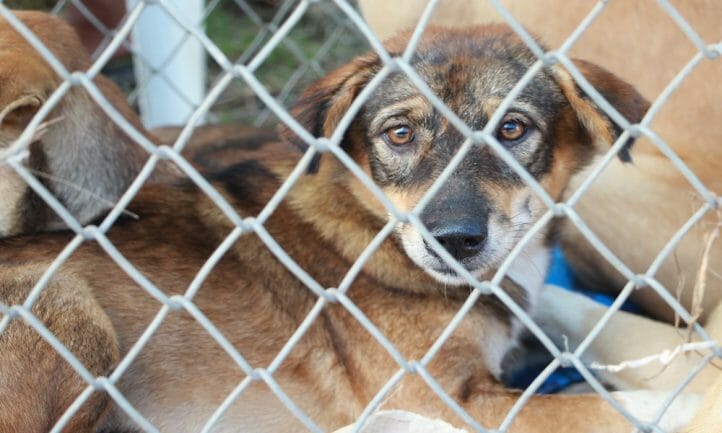 UPDATE: On December 4, 2019, Tamara Olson was found guilty of neglecting six dogs. She was sentenced to four months in jail and cannot own or live with animals for 10 years. While we are glad that she was found guilty, her sentence does not fit the crime.

Six dogs were abandoned in a crowded backyard kennel and tethered without any food or water in Middletown, Ohio. The desperate dogs were found with blood dripping out of severely infected wounds from attacking each other and were also covered in their own feces.

Worried neighbors who witnessed the dogs fighting called animal control but were told they were unavailable. They turned to rescue groups Joseph’s Legacy and Ride For Life who heroically rushed to the scene.

All of the dogs were injured. Two of the dogs required urgent medical care, and one was fighting for her life.

Police officers were told that the carer, Tamara L. Osmon, had a history of animal abuse and backyard breeding.

The police located Osmon and issued her with a summon for six counts of failure to register dogs, four counts of improper confinement enclosures and one count improper confinement chaining/tethering. Police Chief Rodney Muterspaw stated that animal cruelty charges were not filed because animal experts and the prosecutor agreed the above charges would prove stronger in court.

We must demand that the prosecution do everything they can to convince a judge to sentence Osmon to the fullest extent of the law.

Please sign this petition urging the Prosecutor’s office to convict Osmon and impose a lifetime ban on her ever caring for another animal again.