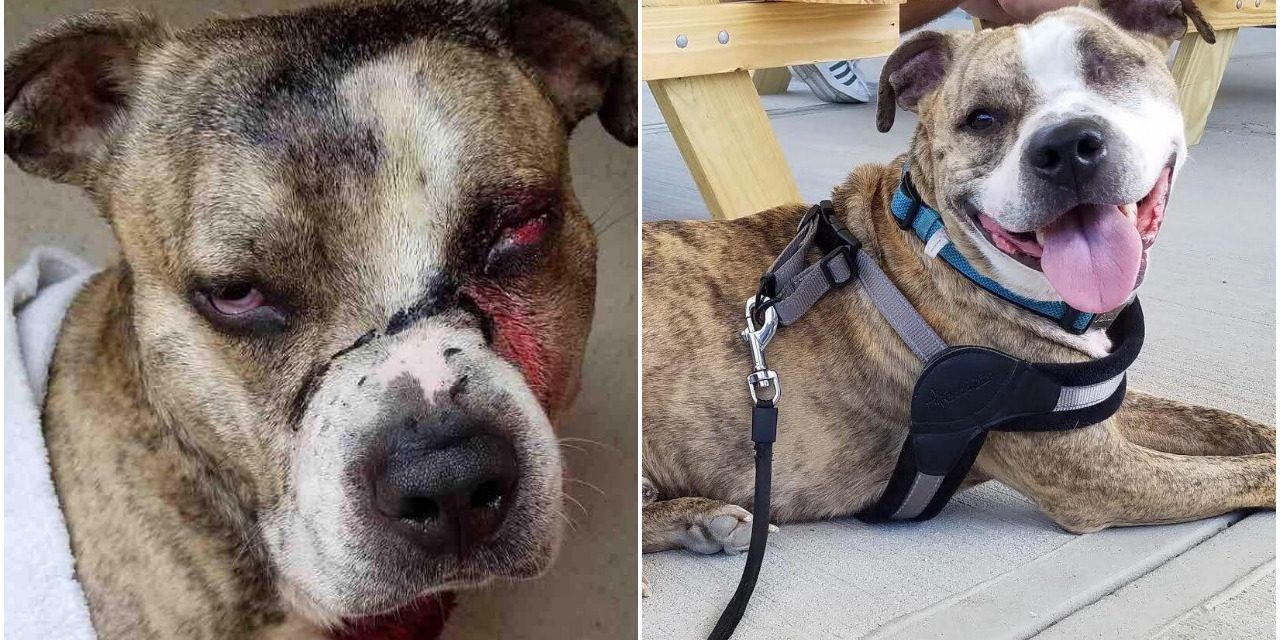 A beautiful dog who was shot in the face, doused in bleach and left to die has found his forever home with the very same police officer who was first on the scene.

Winx, as he’s now known, was reported to the Indianapolis Metropolitan Police Department in  May, after he had wandered into the local post office badly injured and bleeding profusely.

Officer Timothy Elliot responded to the call, arriving to find the pit bull lying whimpering in a pool of blood. In spite of his horrific injuries – including a gunshot wound to the eye, bleach burns, and a broken jaw and teeth – the dog responded to the kind-hearted police officer.

“When I actually came in there, he wagged his tail, got up and came to me, and then just kind of collapsed by my legs,” said Elliot.

Winx was picked up by Indianapolis Animal Care and Control and received emergency veterinary treatment. Unable to stop thinking about the dog, Elliot and his wife visited the next day, deciding then and there to foster Winx during his recovery.

The dog needed surgery to remove his eye, and later, further surgery to remove the bullet, which had travelled to his throat and become stuck. He also required an operation on his jaw and was unable to eat solid food for an extended period. A GoFundMe campaign managed to cover the cost of his many surgeries and ongoing care.

Tim Elliot and his wife Tiffany quickly fell for Winx, and the feeling was mutual.

“We knew we were going to adopt him as soon as we brought him home,” said Elliot. “Because he made this his house. He pretty much made the decision before we did.” 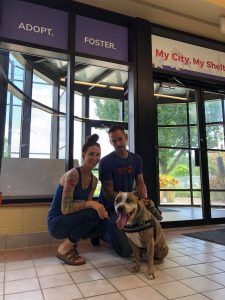 Winx is lucky to be alive, and even more lucky to have found a loving home. He now has four furry siblings – two dogs and two cats, all rescued by the Elliots.

“He was so strong; any other breed of dog maybe would’ve died, which is one of the reasons why I wanted to bring him home,” said Elliot. “He was bound and determined not to give up.”

Police are still searching for the person who inflicted such cruelty on this innocent dog. Elliot says they have leads, but as yet don’t have enough evidence to move forward and press charges.