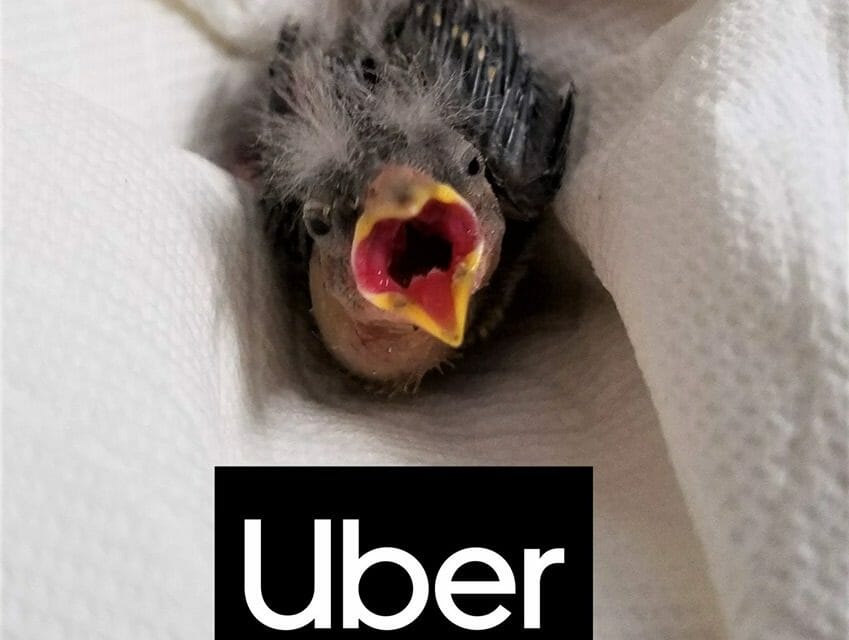 A man and his friends are receiving widespread praise after ordering an Uber for an injured baby bird because they wanted to save the animal, but didn’t want to drink and drive.

When Uber driver Christy Guynn arrived at the pick-up location in Ogden, Utah one Saturday night in late June and saw the men drinking beer, she worried that her passengers would try bringing their beverages in the car with them. To her surprise, however, none of them needed a ride — they’d summoned her to transport an injured baby lesser goldfinch to the Wildlife Rehabilitation Center of Northern Utah.

The man who ordered the car, Tim Crowley, approached the passenger side window and explained to Guynn that he and his friends had been drinking and couldn’t drive, and asked if she’d take the bird to the center. They had witnessed the baby bird fall from a tree and noticed the animal struggling on the ground afterward.

The friends initially joked about getting an Uber for the ailing bird, but it quickly turned into a serious idea. They padded a box with some leaves and ordered a car.

The first driver canceled the ride upon learning about the situation. Guynn, however, told the gentlemen that she’d be happy to complete the task.

The rehabilitation center received a call from one of the men, explaining that the bird was en route via an Uber because he’d “had a few too many.” They praised the man for his kindhearted and safety-conscious deed in a subsequent Facebook post, expressing their gratitude for his concern for both the bird and for other people:

“Thank you to the rescuer who helped this little one get the care it needed in a timely manner, and thank you for keeping yourself safe and others on the road safe as well!”

The bird was a chirpy but pleasant passenger, according to Guynn, who is also proud of the tipsy crew for rescuing the nestling without getting behind the wheel.