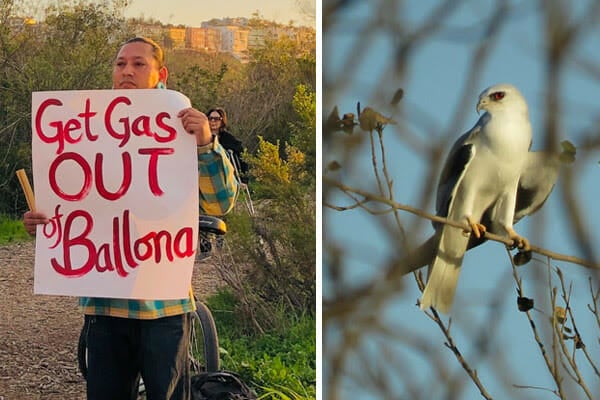 A group of organizations is campaigning to save the Ballona Wetlands Ecological Reserve – Los Angeles’ only remaining wetland habitat – from demolition, and they’re inviting you to join the fight.

“Heal the Bay has quietly aligned with the fossil fuel industry on a disastrous plan that will destroy the last remaining wetlands in Los Angeles, put hundreds of species at risk, and perpetuate our reliance on dirty energy,” states a press release from In Defense of Animals.

Over 200 birds, including various songbirds, the white-tailed kite, snowy egret, and burrowing owl, depend on the Ballona wetlands for their survival, especially as a vital stopping point along their migration routes. Others animals, like the grey fox, striped skunk, and slender salamander, also call the wetlands home.

“More than two million cubic yards of dredged or fill material would be repositioned on the project site,” said Michael Zelniker, co-chair of the Climate Reality Project Los Angeles, “resulting in the release [of] sequestered greenhouse gases in potentially substantially large quantities. This unnecessary release of greenhouse gas emissions will only serve to exacerbate the catastrophic consequences of global warming and climate change.”

The organizations collaborating to save the Ballona wetlands are hosting an online Town Hall meeting on Tuesday, April 7 from noon until 1:00 p.m. Pacific Time. Anyone interested can register to join or watch the meeting live on In Defense of Animals’ Facebook page.