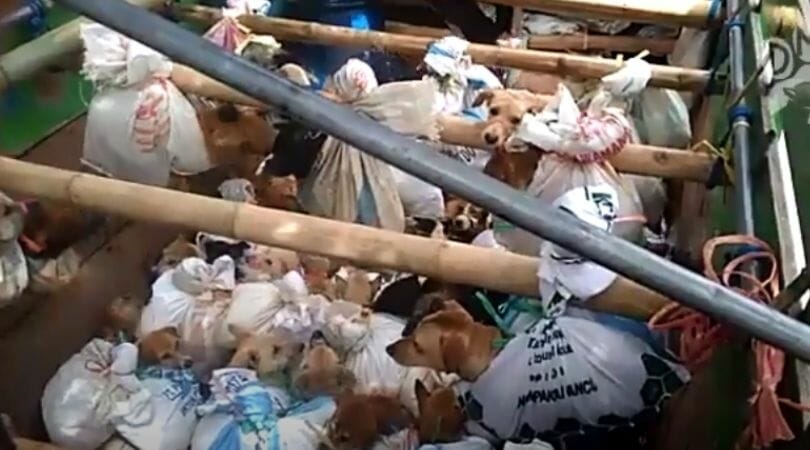 The dog meat trade is reportedly thriving in Indonesia’s major cities, despite the current coronavirus pandemic and warnings from experts about the ever-present dangers of zoonotic diseases.

Tens of thousands of dogs are illegally trafficked throughout Indonesia every month, including rabies-infected dogs traveling to previously rabies-free areas in the country, according to DMFI.

“There are reports that dog-meat markets have a higher rate of rabies than the general dog population,” the U.S. Centers for Disease Control and Prevention confirmed, “as people often sell dogs to the markets when they are sick; some of these sick dogs have rabies. Furthermore, there are at least three published reports of humans acquiring rabies from activities associated with the dog meat market, emphasizing that the risk is very real.”

The dog meat trade exposes humans to dangerous pathogens that could potentially spark another global disease outbreak, with dogs transported and slaughtered in hazardous, unhygienic conditions similar to those at the “wet market” in Wuhan, China, which allegedly served as ground zero for the current COVID-19 crisis, DMFI reported.

Research by DMFI shows that while only a small percentage of the Indonesian population consumes dog meat, the industry itself exposes thousands of people to potentially deadly viruses daily, inadvertently setting the stage for what could be the next worldwide viral outbreak.

“The Indonesian government pledged it would ban the trade in August 2018, but, despite warnings of the risks the dog meat trade poses to public health and safety and despite promises from the authorities to take action, we’ve seen very little commitment for action from the provincial or central government,” said DMFI representative Karin Franken. “If the current pandemic has not served as a wake-up call to the authorities for the need of action, we don’t know what will!”

“In light of the catastrophic impact of this pandemic, a precautionary approach is required to limit all risks, and cruel, illegal and dangerous trades can no longer be ignored, said DMFI representative Lola Webber. “Now is time for the Indonesian government to take action.”