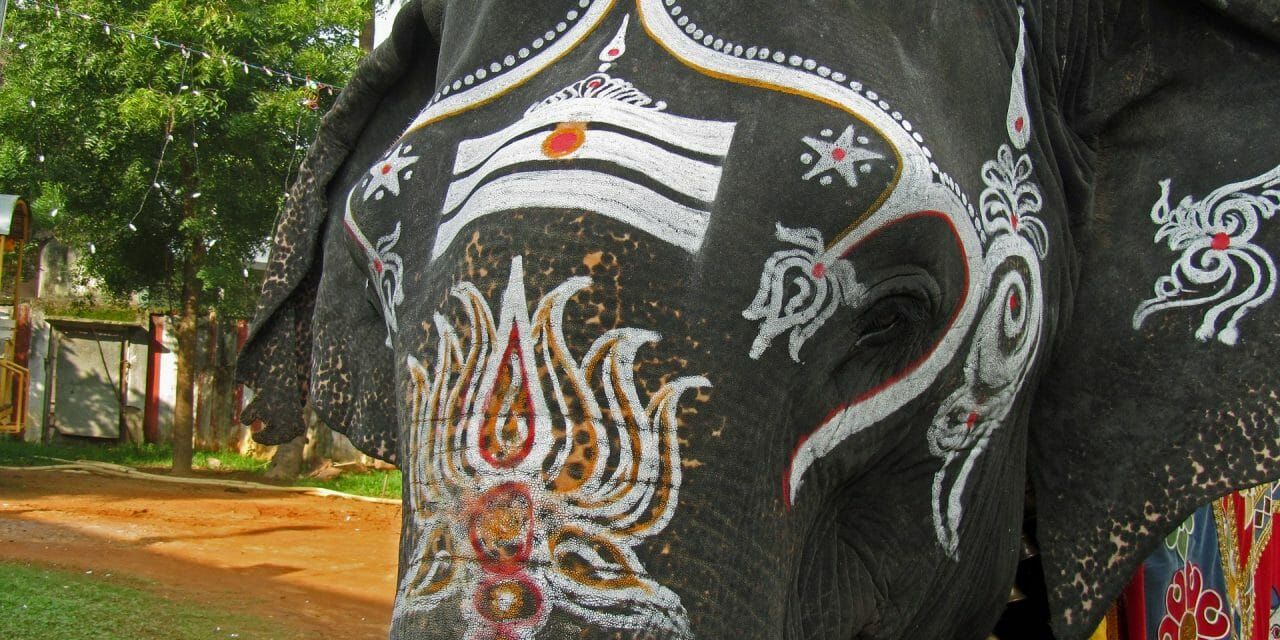 Picture of elephant by PeterW1995 via Pixabay, CC BY 0.

Although elephants are endangered, it’s common to use them in rituals and processions in the state of Kerala, India. One local temple has decided to go against the grain, announcing at the start of February that they will use wooden structures called Jeevathas to take the place of elephants. Although the temple’s leaders cited safety concerns as the reason for their decision to stop using elephants, the decision is welcome for anyone who cares about elephant welfare.

Map of Kerala by Saravask, CC BY-SA 3.0 via Wikimedia Commons.

Elephants dressed in caparisons and paraded during festival

Typically, elephants parade during a 7-day festival and are decorated with caparisons – an ornamental covering. The elephants’ dress is elaborate, but also unnatural for the elephant. Parading in front of many people, who also sing and play instruments, is a stressful situation for the elephants, which can be dangerous for ritual participants or onlookers.

“I personally like to watch the elephant parade,” local resident K.S. Sreekumari told Deccan Chronicle, the Indian newspaper that originally reported the change. “However, I respect the devaswom’s decision as the parade poses a huge risk.”

Temple authorities switch to wooden structures instead of elephants

Jeevathas are made from wood and don’t look anything like elephants. Their purpose is to carry idols that often represent or honor the god in question. Handles make it easy to carry the structure between two people in a parade by mounting it on the shoulders, which is already a common practice at the southern tip of the state of Kerala, Travancore.

In Hinduism, god has many faces. Nalpathenneeswaram Sree Mahadeva Temple is especially dedicated to a specific form of Shiva called Kiraathamoorthy, where the god is typically depicted as a hunter. Before ceasing to use elephants, the temple’s administration performed an astrology-based ritual to consult the god. Luckily, the temple’s patron god approved the use of jeevathas instead of elephants.

The only other temple known to stop the use of elephants is Kanichukulangara Devi, also in Kerala. Sacred to the Hindu mother goddess Bhagawathi, they were using as many as 15 elephants in their celebrations until they came to the conclusion that using elephants was too dangerous. Hopefully, these pioneering temples will set a trend for the rest of Kerala so elephants and humans can both stay safe.