Home » Animals » In Loving Memory of Bones, Rescue Dog Found Drinking from A Puddle in the RoadBy Cindi Scholefield | July 16, 2021 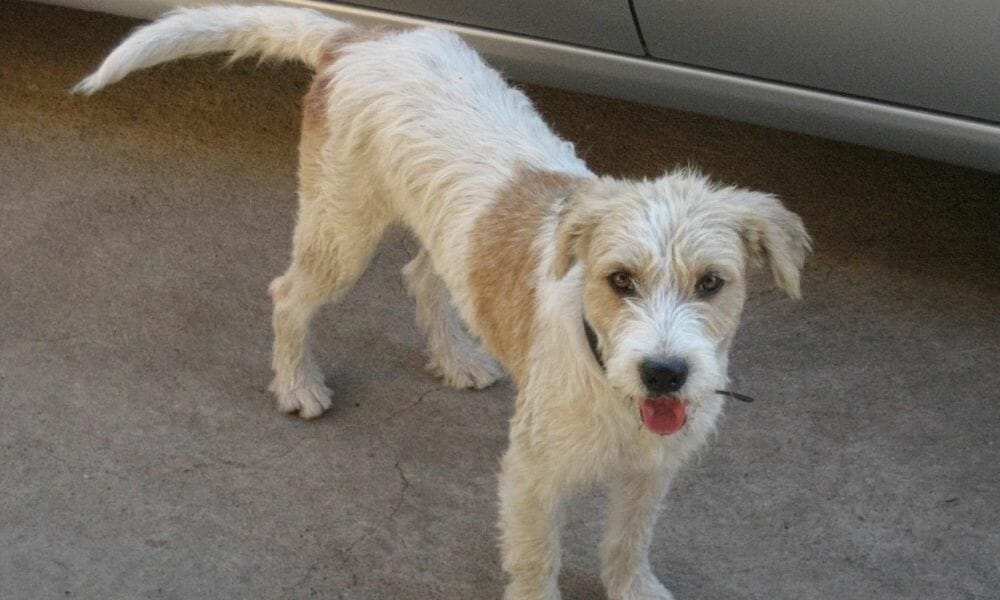 It was a rainy night thirteen years ago. We were coming home from visiting friends, and I noticed a filthy grey dog drinking from a puddle in the middle of the road.

I had actually been trying to catch the dog for a few days, but he kept running from me, so I begged my husband to give me one more try. And that was the beginning of a bizarre dance.

I approached the dog as softly as I could, but at the last moment, he cried out and ran off. He crossed the road into some open land, and so did I. Then, he crossed back and went up a side road, running away as I trailed behind him.

My poor husband kept having to turn the car around to follow us. This went on and on until I was about to give up. Then, the dog abruptly stopped mid-flight, turned and looked at me, slowly walked back, and sat at my feet. Shocked and thrilled, I picked him up, and he traveled home curled up on my lap. 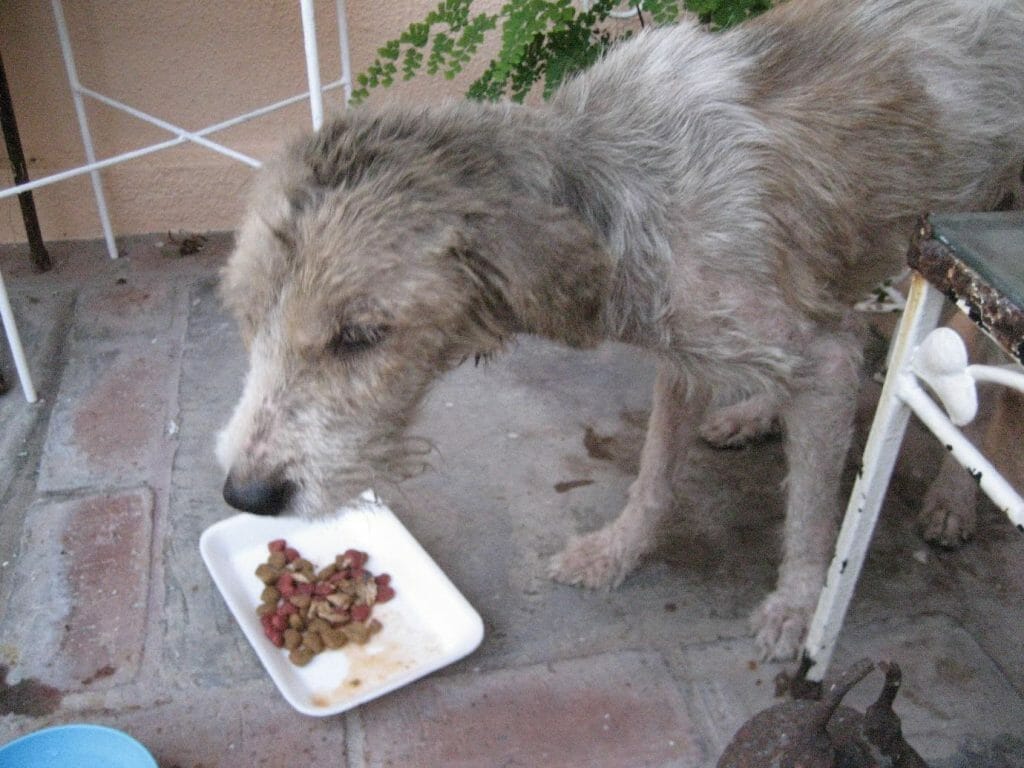 He was in bad shape — emaciated, completely exhausted, and with that defeated look a dog gets when he has given up. Hanging from his neck was a worn collar about five inches too big for him, which suggested that at one time he had seen much better days.

We got rid of that right away and figured that we could give him a good meal and a warm place to stay for one night. Famous last words.

We called him Bones because that’s all there was of him, and after a bath, he turned out to be not grey at all, but white with ginger markings. The other dogs accepted him without a murmur, and we set about looking for a home for him, but quickly realized we didn’t want to part with him. 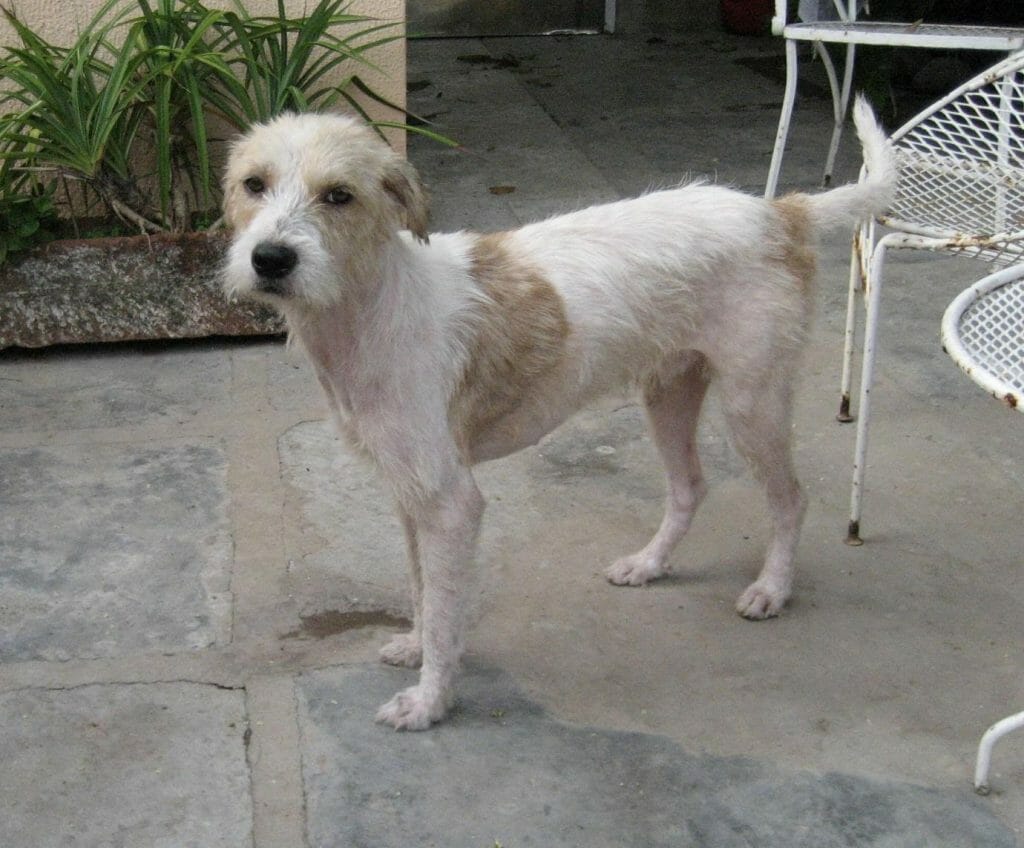 As time passed, he became our fiercest and most loyal defender, despite looking so innocent and sweet. We were his family. Nobody else mattered.

But when I rescued the tiny Blondie whose eye had been knocked out with a stone, he was fascinated. He and Blondie had a special relationship. 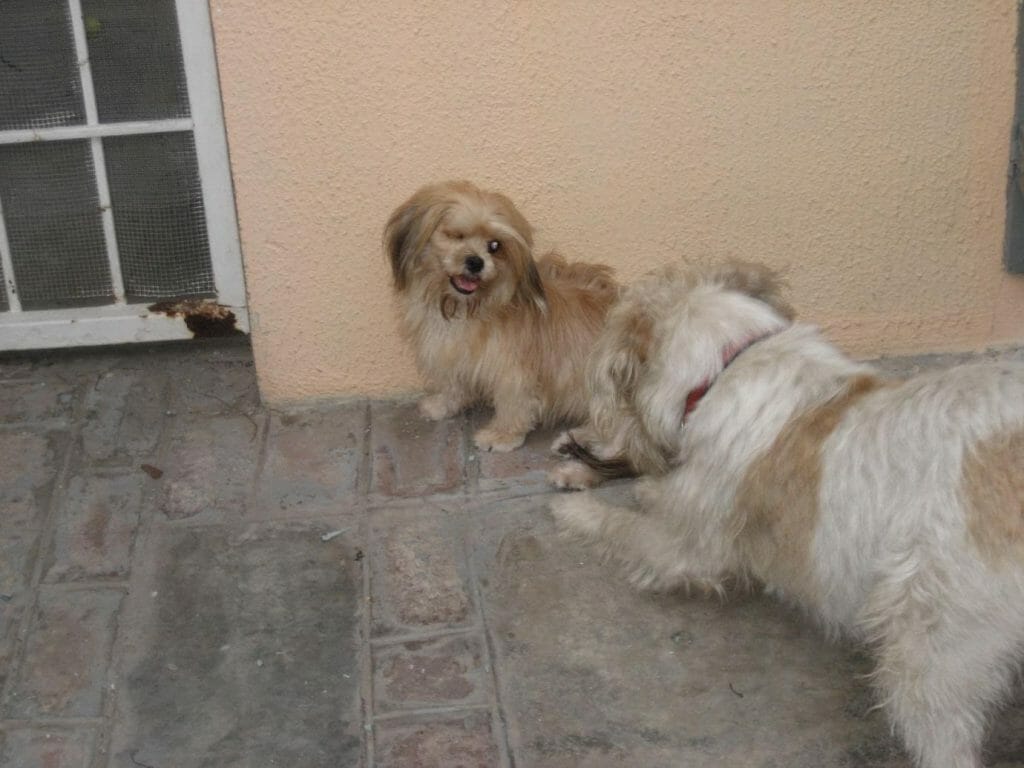 They played endlessly, and he was ever so gentle with her.

When Blondie succumbed to kidney disease after four years, Bones devoted his time to annoying Nita — so much so that when Nita got tired of the game and wanted some peace and quiet, all she could do was sit on him! 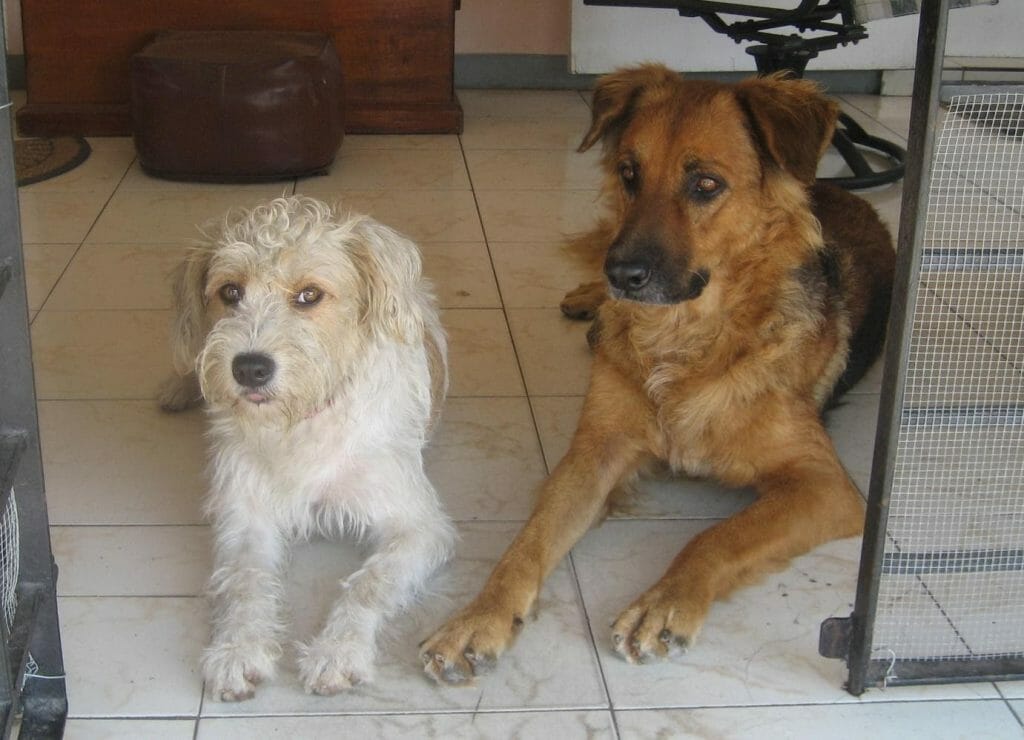 Bones had some interesting quirks, one of which was being a master of the walking poop. When we were out on a walk, he was far too interested in the grass, the road, the bushes, the weeds, and the occasional fallen mango, to actually stop and concentrate on the business at hand.

So, while walking, he would slightly hitch up one back leg and let go of a blob. A little later another blob dropped. Then another, to reach a total of five. Never four. Never six. Five was his quota. So much so that if I only picked up four, we had to keep walking till the other one appeared.

He was a happy guy. 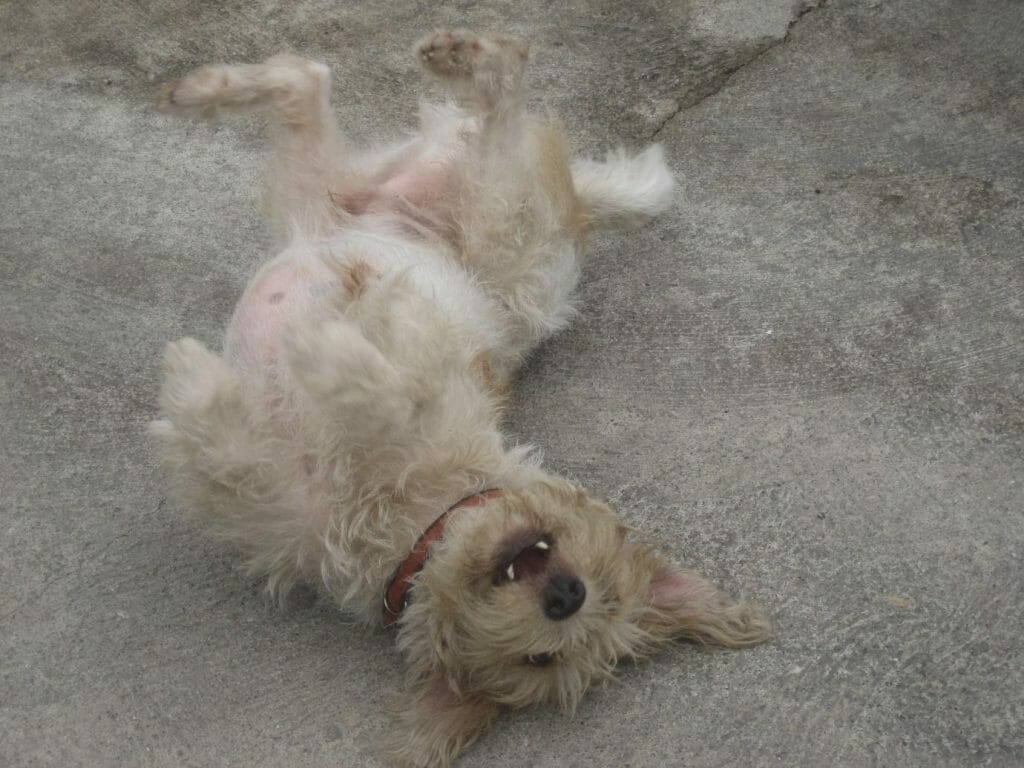 But his love of walking was what we most feared. If the gate was left open by mistake — whoosh — he was out on the road and running at full speed. The others would go out, sniff around a bit, and come back. But not Bones. He was off on a jaunt!

So many times, one of us went running after him with a leash and the other would jump in the car and try to head him off — a tricky business when he actually ran onto the main road.

We became known as the elderly couple dashing down the road in pursuit of a fluffy white dog. Neighbors and even strangers were often co-opted into the effort to get him back, and thankfully we were always able to retrieve him.

With the leash safely around his neck, and with my heart still pounding, I would tell him he was a naughty boy, and he would just grin and pant as if to say, “Oh, I had a wonderful time,” and walk happily home at your side.

Bones loved his comfort, and now and then would sneak into the house to his favorite armchair. 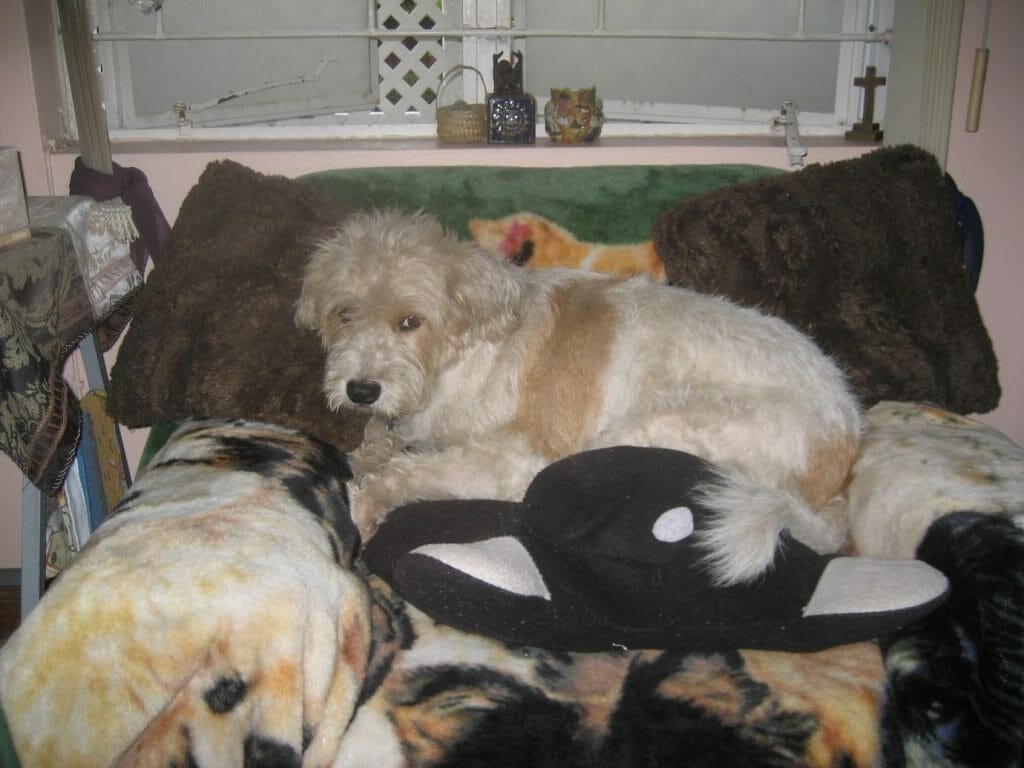 Once we bought him a beautiful, ornate red collar with a smart silver name tag. He hated it. We hoped he would get used to it, but for days he shook his head — so much that he gave himself a hematoma. That was the end of the collar idea. 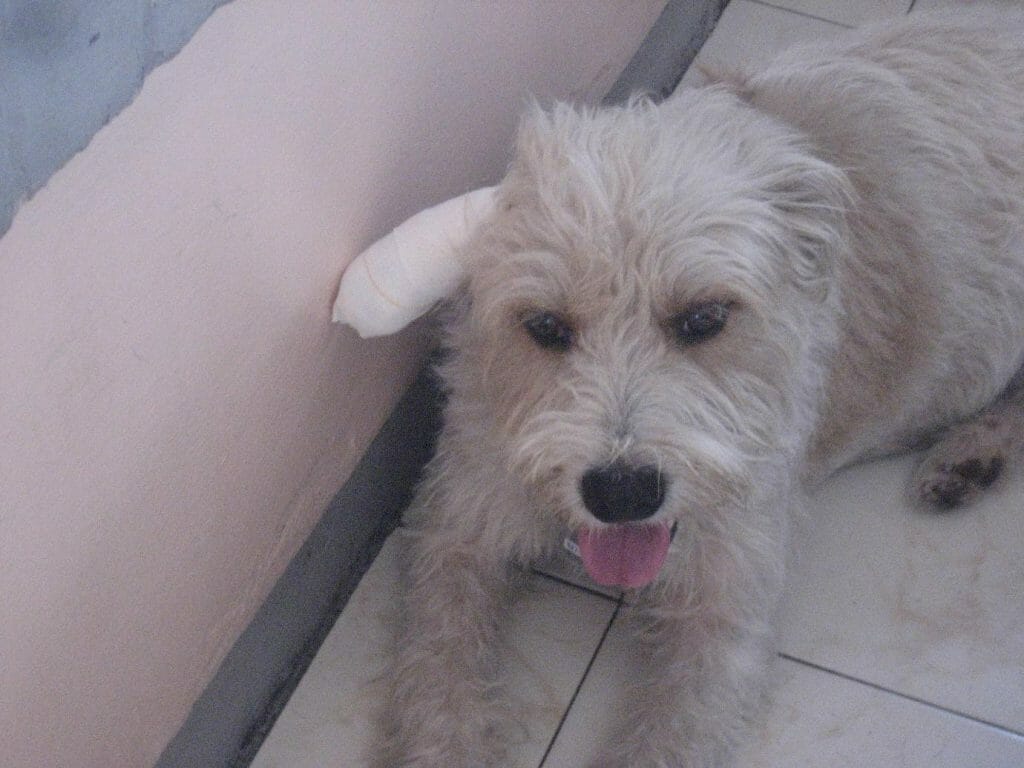 Years passed, and late one night, someone must have thrown rat poison into the yard (this was confirmed by the autopsy on our lovely Gemma who died). We nearly lost Bones but were able to pull him through along with our other three dogs.

After the poisoning, his personality changed and he became quieter (and thankfully more accepting of our friends), although he still reared up and went after tradesmen and delivery people. He had a particular fondness for scaring the daylights out of the plumber.

Eventually, time caught up with him. He lost his hearing. Then, glaucoma stole his eyes, so much so that we began to call him ‘Old Blue Eyes.’ His bark faded to nothing, which really annoyed him because the only thing that came out was a “huff huff,” and he would turn and look at me in embarrassment. Miraculously, his voice came back one day, but the other senses didn’t.

When one of his back legs started giving out we knew we were on borrowed time. We put him on pain meds, which ended up giving him an extra year and a half of life, and left the decisions up to him.

He ate, drank, peed, and pooped, and still wanted to go for his morning walk, although he would sink to the ground several times, take a breath, and pull himself back up. However, his resistance got lower and lower, until I was pulling maggots out of his gums. But each time he healed up and soldiered on.

Until one day he didn’t. We knew he had enough.

Our wonderful Dr. Brown helped Bones cross over. We buried him under a huge guango tree at Caymanas, which already houses the remains of several of our others who have passed on.

Bones, my dear boy, you were a great character, a great companion, a great protector, and you have left a huge hole in our lives. We will never forget you.

As you travel into the light, you go with our love. 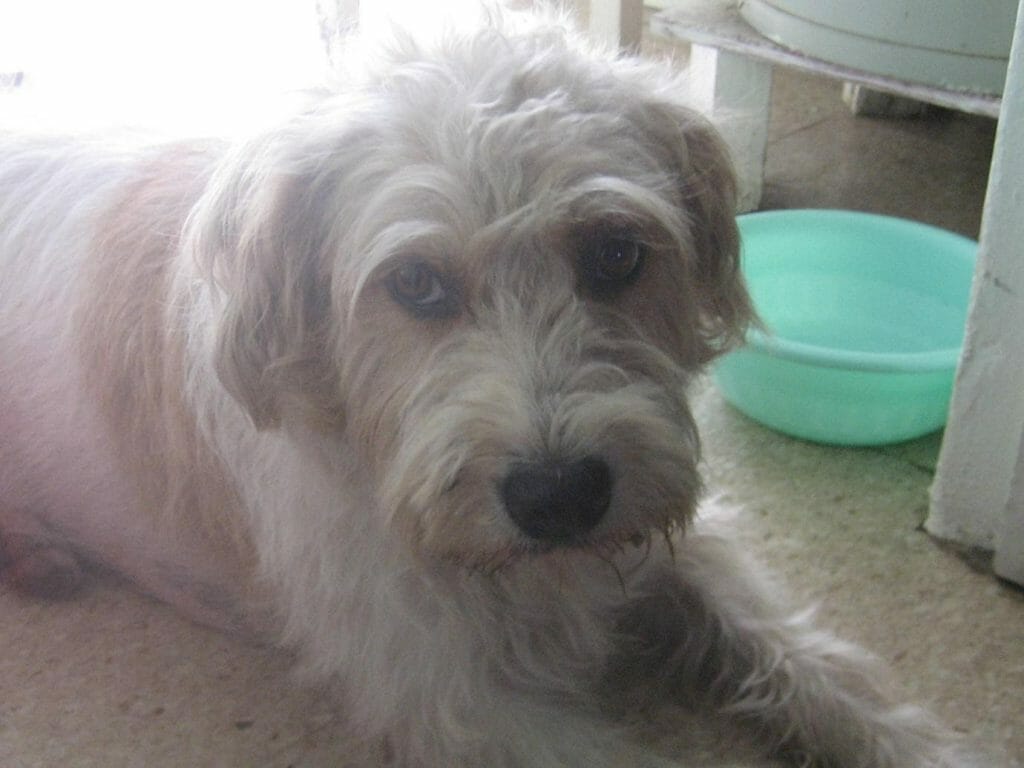