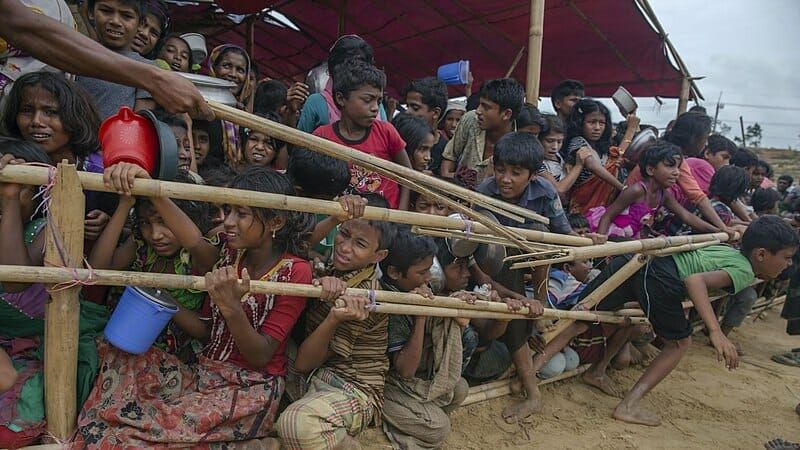 I’ve been seeing news pieces about refugees since, well, since I can remember looking at a paper or watching TV news. Civil wars and genocide in Africa, natural disasters around the globe, more recently people fleeing Syria and conflicts in the Middle East, and now the Rohingya. It can be overwhelming. It can give you a sense that humanity won’t ever be able to treat each other with compassion and dignity, without hatred and violence. Sometimes I just want to look away, to disconnect from the suffering I feel I can’t do anything about.

But when we get to that point of despair, bottoming out on hope, maybe that’s exactly when our attention counts. When most people will sigh and lament the sadness of the situation but conclude, Not my problem. I can’t do anything about it – that’s the time to accept that it is our problem. We are defining what it is to be human as much as those who commit atrocities. And if we don’t step up and give it our attention, talk about it with others, make our voices heard, we are only contributing to that worst kind of humanity instead of the kind we want to be.

So please take some time to learn about the Rohingya people and the crisis they face today. You can get the main points from the first two sentences of each section, or a more in depth look at what’s happening.

Who Are the Rohingya?

The Rohingya are a unique ethic group of people, primarily Muslim, that have lived in a northern region of Myanmar (formerly Burma) for hundreds, if not thousands, of years. They have been denied citizenship by the government and are considered stateless.

There are over 1 million Rohingya in Southeast Asia, primarily in an area known as the Rakhine State. They speak a distinct dialect known as Rohingya or Ruaingga and may be descendants of Arab or Persian traders. Living in a tenuous coexistence with a Buddhist majority for many years, in 1982 they were officially denied citizenship by the Burmese government and have been a stateless people ever since. Because of their status, the Rohingya enjoy little to no rights and have faced persecution for years, escalating to the current crisis.

Myanmar’s past has been fraught with colonization, invasion, and civil war and continues to suffer from corruption deep within its ranks. Though the Rohingya’s history in the area of what is now Myanmar is dated by some back to the 12th century, they are not considered one of the country’s ethnic minority groups. This is in part due to the fact that during British colonial rule (1824-1948) of Burma and India, the areas were considered connected and many people migrated back and forth. The government of Myanmar has never recognized them as citizens and treats them as illegals from Bangladesh.

What’s Happening to Them?

Now they face what may amount to genocide by the Myanmar military and police as well as deplorable conditions in refugee camps located mostly in Bangladesh where hundreds of thousands of people have fled. Reports of massacres, rape, and the burning of entire villages have been denied by the government. 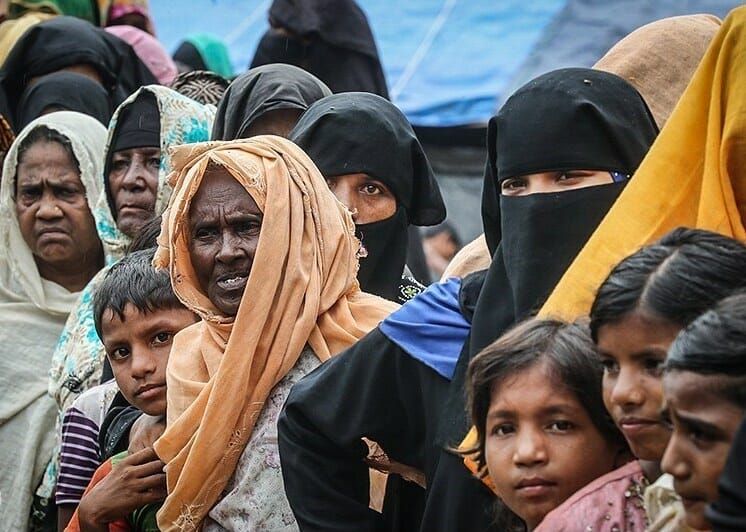 Crackdowns and discrimination of the Rohingya people by the government of Myanmar (Burma) have been going on for decades. However, this past August violence escalated after militants attacked security forces and the army retaliated with a “clearance operation.” Though the Burmese Army claims to be combating terrorists, more than 688,000 Rohingya have fled the region just since last August due to violence and destruction. The scope and brutality of this operation was labeled as a “textbook example of ethnic cleansing” by the United Nations Human Rights Chief, Zeid Ra’ad. The atrocities committed by the Myanmar army, ignored or endorsed by many of its people have reached a new height. Recent revelations of mass graves of those murdered by the army call into question if the actions of Myanmar amount to genocide. The UN estimates over 1,000 people have been killed; others estimate the number to be closer to 3,000.

Those that survived the violence have fled, but nowhere is a welcome home. Estimates of up to 900,000 people may be living in neighboring Bangladesh. Camps are in deplorable condition and now threatened by mudslides during the monsoon season. Neighboring to the south, Thailand has a sordid history of handling refugees, leaving the Rohingya in a bad situation no matter where they turn.

What About Aung San Suu Kyi?

Known for enduring house arrest for 15 years, Aung San Suu Kyi’s National League for Democracy party gained power in Myanmar in 2015, bringing hope to a country historically repressive. A Nobel Peace Prize Laureate, she has gone down in history as a champion for democracy and human rights, but is now glaringly silent on the Rohingya issue with some even questioning whether she deserves the Peace Prize. 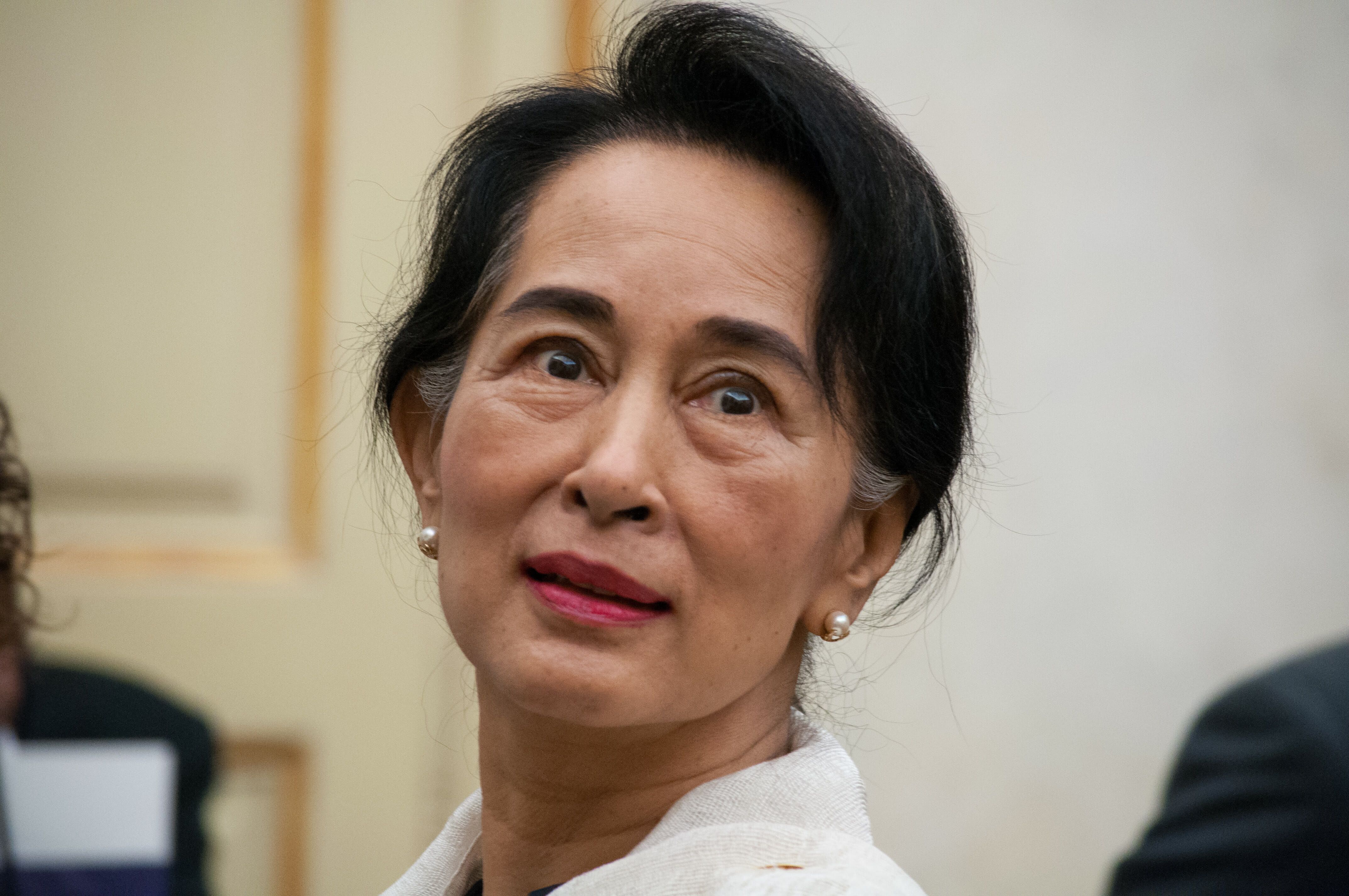 Lady Freethinker celebrated with the rest of the world in 2015 when Aung San Suu Kyi rose to power. Nobel laureate, famous for her dedication to democracy, at first her silence regarding the Rohingya was met with confusion and a tense patience by the world. But as the silence has shifted to denials and excuses, she faces more and more criticism. Undoubtedly in a tenuous political position due to the fact that the Burmese government is still in large part controlled by the military, Aung San Suu Kyi has nonetheless disappointed the world by her actions. Much of the Buddhist majority nation has little sympathy for the Rohingya, and speaking out could anger the military and Buddhist nationalists. However, pressure is mounting for her to live up to her reputation as a champion for human rights.

Labeled as “the most persecuted minority in the world,” the United Nations has instigated its second highest investigation action, yet repeatedly been denied access or only given interviews with a chosen few. The United States has ended military aid and considered sanctions against the country.

UN Human Rights Council has attempted to send a fact finding mission in to assess the situation up close but has been refused. However, the team has taken testimony from refugees and is expected to report to the UN General Assembly in March. There is also a possibility of a special investigation and criminal charges on individuals involved in what may be declared genocide.

Though the U.S. House passed a bill condemning the ethnic cleansing, the legislature has not gone so far as to pass sanctions against Myanmar. Some legislators are opposed to sanctions, believing it will harm Aung San Suu Kyi’s position and destabilize the country further. When President Barak Obama became the first U.S. president to visit the country, hope was rising for democracy in the nation and an opening up to the world. However, many now believe that it could take generations to repair the damage that has been done.

If you’ve gotten this far in the article, you’ve already made a good start in educating yourself and turning your attention to the social justice of a people in crisis. The next steps are to share with others what you know, let your Representatives know that you believe the Myanmar government should face consequences for their crimes, and get involved at some level with an organization that is trying to help.

The New York Times published an extensive list of NGOs and nonprofits as well as their steps to be involved with the Rohingya.

Amnesty International has been at the forefront of calling out Myanmar. They have a petition targeting the commander of the army, Min Aung Hlaing.

It’s always a good idea to check on Guidestar.org or Charity Navigator for ratings on charities.