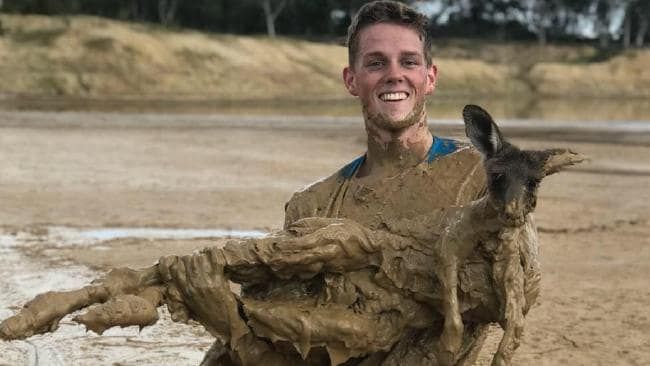 Two Australian teenagers worked together to save the life of a distraught kangaroo who was trapped deep in mud near a river in New South Wales this week.

Nineteen-year-old Jack Donnelly and Nick Heath discovered the animal when they were riding their motorbikes in bushland on the outskirts of Sydney. Jack’s sharp eye spotted the head of the kangaroo peeking out of the mud flaps near the Nepean River and the pair went to investigate.

Unable to reach the animal immediately, Nick and Jack raced home to fetch rope so they could reach the distressed and weak kangaroo. Mr Donnelly then secured himself around the waist with the rope and crawled on hands and knees through the thick mud to reach the roo, then was pulled the 30 meters back to safety by Mr Heath.

“The roo’s life was important to us so we went out on an arm and leg and got it,” said Mr Heath. “We think he went searching for water there and it was really muddy so he got himself really stuck.”

The two young heroes recorded their rescue effort, and the kangaroo – who they named Lucas – can be heard grunting and moaning throughout the rescue, clearly exhausted and stressed.

The boys handed the kangaroo in to WIRES, a local wildlife rescue organisation, who reported that although the animal was weak and dehydrated, he had a good chance of survival.

“It’s a pretty patriotic thing to do and we’re proud of what we did. If we saw something like that again, we’ll do it all over again,” said Heath.