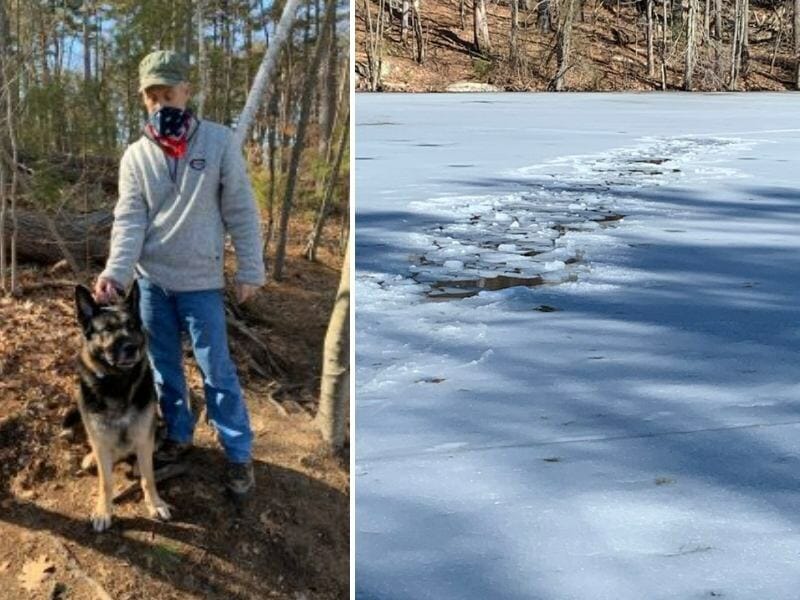 A dog named Diesel helped save the life of a man who fell through the ice at Quarter Mile Pond in Massachusetts, Boston 25 News reported.

The man had crashed through the ice on his bike. Stranded and panicked, he needed help. Luckily, Diesel noticed.

The 5-year-old German Shepherd started barking at his guardian, Thomas Walsh, and directed Walsh’s attention to the struggling young man in the water.

Walsh, who had been wearing headphones, said he wouldn’t have heard the man’s calls.

“He’s the hero today, because without him seeing or hearing him, I would have just kept walking,” Walsh told Boston 25 News.

Walsh called 911. He tried to coach the 22-year-old to shore, but the man kept falling through the cracking ice. Another passerby arrived and joined the rescue mission. Walsh tied Diesel to a tree,  where the dog waited patiently as the two men tossed a tree branch to the young man and pulled him safely to shore.

Emergency responders arrived with two divers and an ice sled, according to Stoneham Fire Department. The man was taken to the hospital for treatment, with a full recovery expected.

“We are grateful for this outcome and for Diesel alerting his owner that something was wrong,” said Fire Chief Matthew Grafton.

Lady Freethinker applauds Diesel for his  lifesaving attention to detail and Walsh for his quick thinking to save this young man from drowning.