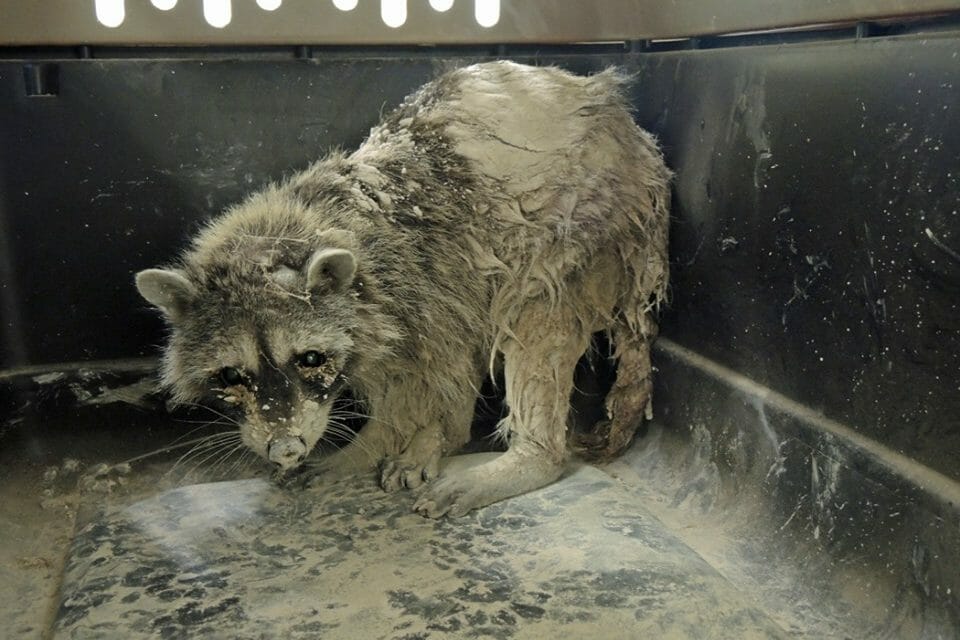 One day in late June, workers at an Arizona cement plant noticed some fur among a slab of drying concrete. An older female raccoon had fallen into the slurry and was trapped in the mixture overnight.

Realizing she was still alive, they lowered a wooden plank into the cement to provide her with an escape route.

“The harder this poor raccoon struggled to free herself, the further she sank,” the Southwest Wildlife Conservation Center wrote in a Facebook post. “Evening temps were cool that night, and as the cement began to set up, she was losing body heat.”

It took the exhausted raccoon two tries to make it up the plank to safety. The first time, she fell back into the well, but she made it out the second time, collapsing into a ball as her cement-covered fur began hardening.

Staff knew they had to hurry to save the raccoon’s life, but first, they had to figure out how to help her. They had never encountered a cement-covered animal before.

The workers called SWCC to ask volunteers to retrieve the rescued raccoon.

“We were really in a quandary,” Linda Searles, director of SWCC, told The Dodo. “How do we get rock-hard concrete off a raccoon?”

The raccoon was sedated and given IV fluids while workers used a forced-air warming blanket called a Bair Hugger to get her temperature back to normal. The inflatable blanket is nearly weightless.

However, the heat from the blanket was drying the cement.

As a result, staff were left with no choice but to painstakingly shave her. It took an hour — and their entire razor blade supply — to remove the hardened fur.

Following advice obtained from a vet tech, they soaked the raccoon in warm vinegar  water. The bath successfully removed the concrete dust from her body, allowing her skin to return to a healthy pink.

The raccoon has a long road of healing ahead of her, but is doing well, according to SWCC’s most recent update. Because she’s older, a veterinarian will reevaluate her condition as she recovers to see if she can be safely returned to the wild.