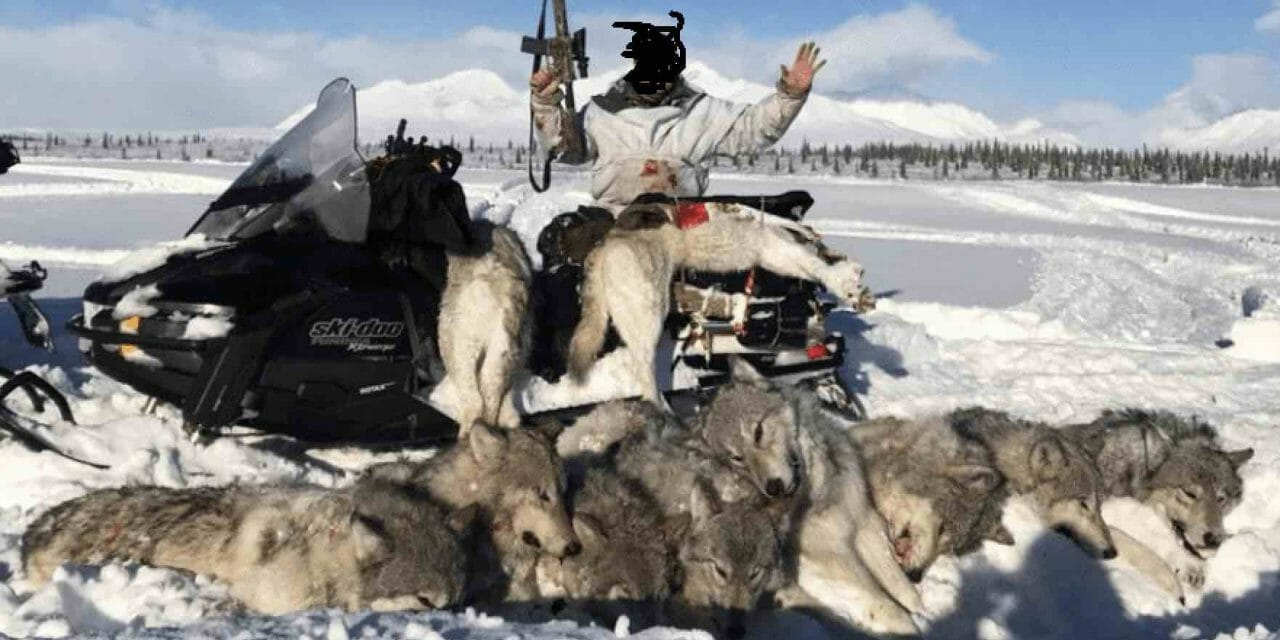 It’s a magical place: the mere mention of Alaska evokes imagery of wild wolves and majestic bears. At one time, people visited and relocated there just to be in their midst. That’s been changing, however, since the early 1990s, when the Alaska Board of Game (Board) began implementing aggressive predator policies that blame predators for only doing what nature intended. By taking as many predators out of the ecosystem as is arguably sustainable through increasingly efficient and often unfair hunting practices, the Board aims to boost moose and caribou populations for indigenous and out-of-state trophy hunters, bringing millions of dollars into the state. These policies are much debated; conservationists see other explanations than over-predation for reduced prey populations. In the meantime, Alaska’s National Wildlife Refuges are becoming game farms, in the words of Alaskan biologist Francis Mauer.

Alaska received statehood in 1958. At the time, the federal government created a mandate for conservation of wildlife as its highest priority through the passage of the Alaska National Interests Land Conservation Act (ANILCA). Alaskan governors, the Board and out-of-state trophy hunters have had a different priority: Economics. Disregard for the federal mandate and moves toward state control have given rise to not only the question of states’ rights versus federal authority, but a mentality of treating some of the last of this country’s apex predators as an inexhaustible resource. The adoption of these policies is an ongoing controversy, replete with politics and indigenous rights issues, legal arguments and conservation challenges. In the meantime, apex predators are in the literal crosshairs each time a governor appoints a Board member, a Board resolution is signed or a policy enacted.

It can be disheartening to realize that the Board itself is comprised of hunters and those with vested hunting interests. At least one of the members, Vice-Chair Nate Turner, is an owner of an outfitting company directly profiting each time a decision is made to increase bag limits, allow aerial hunting or look the other way when wolf pups are lethally removed from dens. While these specific practices may not bring in direct revenue for Mr. Turner’s company, they are part and parcel of the domination of economics over conservation.

Turner is joined by Chairman Ted Spraker, lifetime NRA member and member of Safari Club International, a proud sponsor of HJRes 69 (a measure rescinding the US fish and wildlife service’s attempt to curtail Alaska’s cruel hunting methods of killing mother bears and cubs in their dens, hunting and trapping of wolves during the denning season, using bait to lure and kill brown bears, among other things). Many Alaskans feel that the consumptive makeup of the Board is directly responsible for the increasingly aggressive predator control policies. With none of its members coming from the ecotourism industry that reveres animals as sentient beings, this constitution treats Alaska’s apex predators as animals to be consumed, not conserved. All of its seven members appointed by the governor adhere to this philosophy.

Must Alaska resort to consuming its wildlife to survive? One need only point to the $2 billion annual income in the ecotourism industry, nearly twice the revenue generated from the trophy hunting industry, to answer in the negative. Why, then, do they not support the viewing of wolves and bears from tour buses and the revenue derived from tourism and honor the federal mandate of conservation?

Again, the answer for some Alaskans is simple: The Board consists of hunters. Their philosophies (and conflicts of interest) supersede the conservation priority. Grizzly bears, black bears, brown bears, grey wolves, are resources. Wealthy trophy hunters pay outfitters handsome sums to take the life of a grizzly (wolves are free, if they are trotting through a hunter’s crosshairs).

All of the Board members’ terms remain active, which means that for now, Alaska’s apex predators will continue to be held in the crosshairs and in peril. While these aggressive predator control policies persist, it is not unsurprising to see individuals acting out this philosophy for all to witness. This past winter, in a malicious act of violence, a disturbing image made public of a clearly triumphant masked man with an AR-15 semi-automatic rifle held high over his head, posing behind the carcasses of ten grey wolves gunned down just outside Denali National Park. It begs the question, was this man acting on his own volition, or was he supported by Alaska’s aggressive anti-predator culture at large?