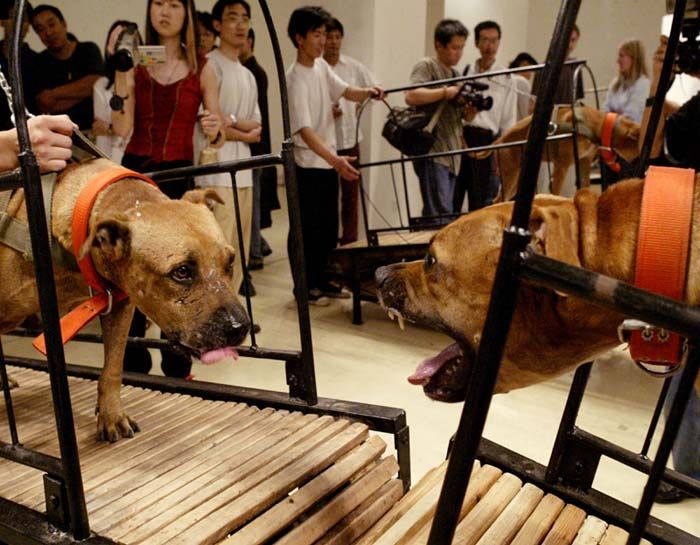 Over the course of last week, animal rights activists bombarded the Guggenheim Museum with criticism over its new exhibit, “Art and China After 1989: Theater of the World.” Three pieces within the exhibit, “Dogs That Cannot Touch Each Other,” “A Case Study of Transference,” and “Theater of the World” featured animal exploitation that led to widespread controversy about the artists’ unconventional methods said to portray messages of power, violence, and humanity.

Protesters physically swarmed the museum in central Manhattan and created an online petition that garnered over 770 thousand signatures. The petition declared “controversial art that breaks barriers and challenges social norms” should  “NOT include the promotion of cruelty against innocent beings.”

The museum initially tried to placate critics by releasing a statement asserting “we recognize that the work may be upsetting. The curators of the exhibition hope that viewers will consider why the artists produced it and what they may be saying about the social conditions of globalization and the complex nature of the world we share.”

However, by Monday, the Guggenheim conceded to protesters’ demands to remove the pieces from the exhibit, albeit unwillingly and with little understanding of the pieces’ potential for harm. The museum published yet another statement claiming that “repeated threats of violence” from protesters “have made our decision necessary,” and that it was “dismayed that we must withhold works of art.”

“Dogs That Cannot Touch Each Other,” created in 2003 by Peng Yu and her husband, Sun Yuan, was the first piece to come under fire. It features four pairs of American pit bulls, all purposely bred for dogfighting, harnessed to non-motorized treadmills and placed within inches of each other so that they will never make direct contact. The dogs run and lunge at one another in a practice that is traditionally used as fight training. After several minutes on the treadmills, the dogs’ muscles quiver noticeably, and they begin to foam at the mouth.

The piece is supposedly meant to “examine and critique systems of power and control,” and while originally shown live, the Guggenheim intended to display a video recording of a previous exhibition.

Although Peng Yu and Sun Yuan did not respond to LadyFreethinker’s request for comment, Ms. Peng has previously contributed to the stigma surrounding pit bulls and their demeanor, and claimed that “these dogs are naturally pugnacious.” Her comment and artwork reflect the blatantly false notion that all pit bulls are violent and aggressive, which often leads to humans regarding them with fear, scorn, and even more violence. 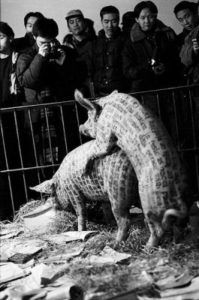 “A Case Study of Transference,” by Xu Bing

“A Case Study of Transference” (1994), by Xu Bing, was also to be featured in the form of a video recording. The piece includes two pigs, stamped with nonsensical English words and Chinese characters, mating in front of a live audience. Mr. Xu also did not return requests for comment, but has indicated the piece is meant to showcase the complex relationship between China and the western world. It is unclear what type of ink or dye the pigs are stamped with, and whether or not it also contributes to the lack of regard for the pigs’ well-being. 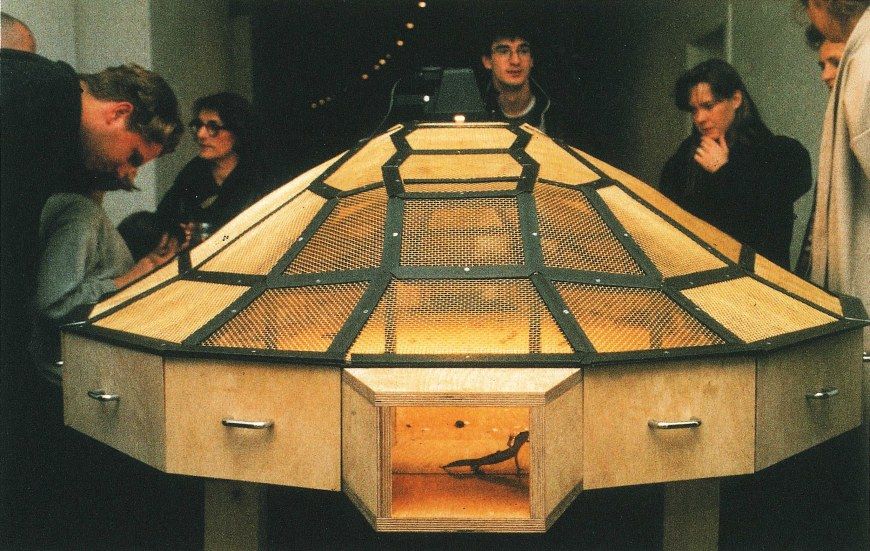 “Theater of the World” by Huang Yong Ping

Huang Yong Ping’s titular piece, originally created in 1993, has been the subject of criticism in several countries for its use of animal cruelty to represent society’s hierarchy. After Mr. Huang refused to comply with requests from animal rights groups in British Columbia, he pulled the piece from a 2007 exhibit. “Theater of the World” involves a variety of live insects, arachnids, and reptiles confined to a wooden and mesh enclosure; some animals will be devoured by their natural predators, and others will perish from stress or fatigue. Traditionally, the dead animals are replaced over the course of the piece’s exhibition. Mr. Huang also did not return requests for comment.

While animal rights activists have won this round, artists and critics worldwide continue to side with the Guggenheim on the grounds of freedom of speech and creativity. They unfortunately fail to realize that artists who are unable to relay important messages and spark complex conversations without exploiting innocent parties are simply creating bad art. Art is certainly meant to be original, unorthodox, and even unpopular, but never without the explicit consent of willing participants.