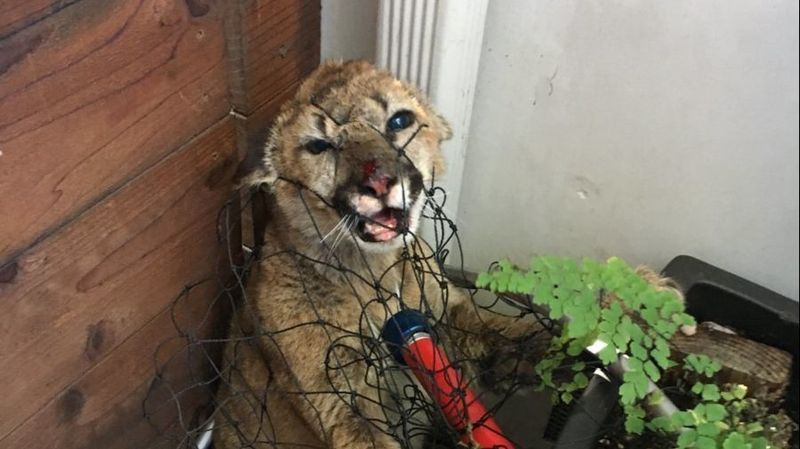 Two mountain lion cubs were recently rescued by the California Department of Fish and Wildlife in the Half Moon Bay community of the San Francisco Bay Area.

The male and female, aged between four and six months, were captured on February 19. They were covered in lesions and ticks, and were malnourished and dehydrated, SF Gate reported. Officials believe that the male cub had been in a fight with a skunk, due to a deep wound on his nose.

The cubs were taken to the Oakland Zoo, where they received veterinary exams and treatment for their wounds.

Meanwhile, the CDFW combed through records of radio-collared mountain lions and reports of roadkill for any evidence that the cubs’ mother may still be alive. A day later, the agency announced in a statement that they had determined the cubs were on their own.

Mountain lion cubs typically remain with their mother for one to two years, learning necessary life skills. Because of their young age and lack of survival skills, the pair, who are most likely orphaned, will not be returned to the wild.

They will continue recovering at the Oakland Zoo until permanent living arrangements have been made for them.

Virginia Thomson, executive director of the Felidae Conservation Fund, which includes the Bay Area Puma Project, stated that a zoo or sanctuary would be the most appropriate long-term environment for the wild cats.

In an interview with the Half Moon Bay Review, she said: “Returning them to a wild would be a massively difficult process because there is not enough information on how pumas live to replicate that training behavior.”

Lady Freethinker urges for the kittens to be released to a sanctuary, where they can live as freely as possible.

Wildlife organizations and CDFW are currently working together to find the cubs a suitable and safe home.