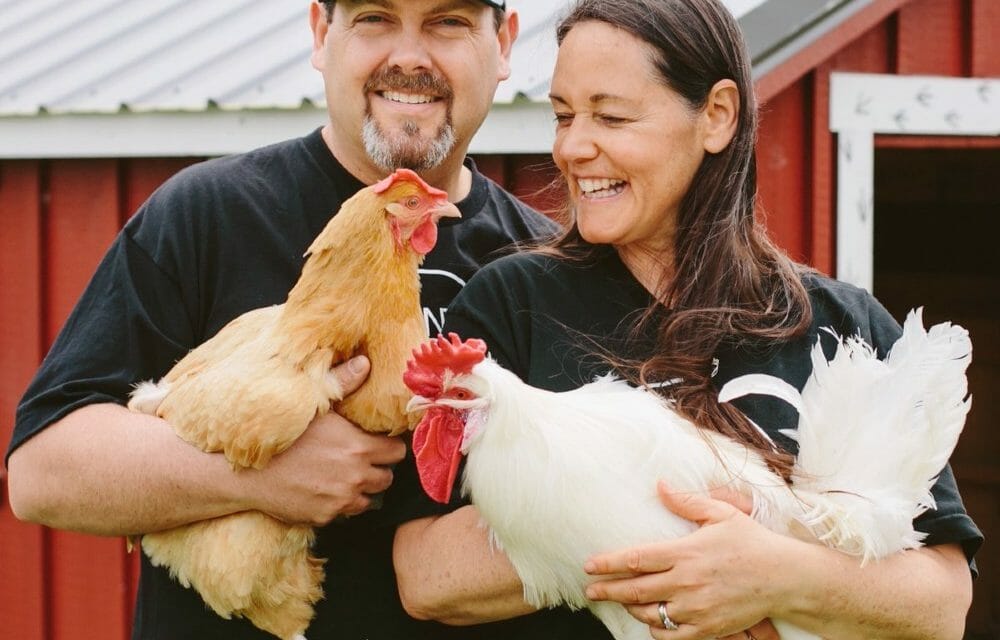 On an early Thursday morning in October, The Gentle Barn Co-Founder Jay Weiner sat in the office and prepared for an interview about his journey into rescue work, veganism, and compassionate living.

Keeping him company, just beyond the vision of his screen, rested 21 recuperating rabbits recently rescued from a research lab where they were subjected to inconceivable cruelty.

“​​We had them up at our healing center on another property, but that healing center is really made for bigger animals,” Weiner told Lady Freethinker (LFT). “So we decided we would remove the conference tables and push everything aside, and you can see that they’ve taken over the entire space.”

This is just a day in the life for Weiner and The Gentle Barn Co-Founder Ellie Laks, who started the nonprofit in 1999 after coming across a handful of animals at an abusive petting zoo. She had half an acre of land, a big heart, and a bigger vision — to establish safe spaces in every state to connect hurting animals with hurting humans, and through the healing process show people just how awesome animals are.

Weiner entered the scene as a volunteer struggling through an ugly divorce. He made an unexpected friend in a rooster named Olaf, who would come running across the barnyard to see him and would peck at his feet until Weiner picked him up.

He also connected with the abused animals he rescued — from backyard butchers and slaughterhouses to hoarding situations — and found joy in helping Laks’ introduce youth with traumatic backgrounds to the animals who helped them find happiness and hope.

Somewhere along the way, the two fell in love. That half-acre plot of possibility expanded into two other The Gentle Barn locations, where people can tour and visit with animals, a Peace Enhancement program for people struggling with addiction issues, and a thriving volunteer and child literacy program where youth can read to the animals.

The nonprofit’s motto — “Teaching people kindness and compassion to animals, each other, and our planet” — has taken the couple far and allowed them to touch countless lives. 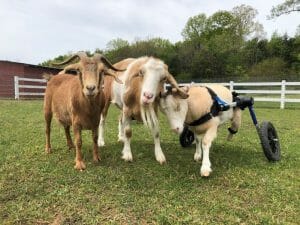 The Gentle Barn has become a haven — whether it’s for pigs, chickens, cows, or rabbits in need of rescue, or LGBTQ youth looking for a place to feel welcomed and accepted.

“Being gentle is the essence of everything we do,” Weiner said. “People can have all different kinds of beliefs, but as long as they are centered in kindness, they have a place here.”

Weiner spoke with LFT about joining the The Gentle Barn team, what he’s learned from his healing work with rescues and people, and his transition to vegan chefdom and living. Answers have been edited for length.

A Q&A with Jay Weiner, Co-Founder of The Gentle Barn

Tell us more about your early connection to animals.

Animals have been this constant throughout my life. I’ve had this belief that animals are always going to be there for me, and it’s turned out that way. Very early on, I had animals in my life that I had really amazing interactions with — including one who even saved my life.

My dog, when I was growing up, was named Cha Cha. I was about 3 or 4 years old, and I had gotten a hold of a bobby pin and stuck it into an electrical socket. It threw me back. I passed out. My mother told me later that the dog had jumped on my chest and licked my face until I came to. My mother came in, and she thought that the dog had done that to me, knocked me over and was jumping on me, but then she saw the pin was in the socket, and so it became clear that the dog was trying to help me.

Tell us about your early days at The Gentle Barn.

I was going through a very difficult time in my life and an ugly divorce. In leaving that relationship, finding solace in The Gentle Barn was really quite amazing and powerfully needed in my life.

My first rescue that I did with The Gentle Barn was with a horse named Scout. I had been out near a vacant lot, and he was lying down and it was raining. It was really strange to me that there would be a horse lying down in the rain like that. I went over the very short wall to go check on this horse, and I’m not really sure if I scared him more or he scared me more. We startled each other, I guess. I pulled him out of that situation. He had bad teeth, he was arthritic and emaciated, and he needed a lot of care. I saw him through it, and in the process I was healing myself and becoming closer with Ellie and The Gentle Barn.

She used to take one of her horses and walk with me and Scout to heal him and it was a very powerful time.

Tell us more about some of your biggest rescue efforts.

The first really big rescue I did with The Gentle Barn was about 17 years ago involving a hoarder in Lancaster, Calif., with 500 animals on the property. We partnered with some other sanctuaries that took some of the farmed animals, but then there were these dogs left. I said, “Who is going to be working with these dogs?” And nobody had a good answer, so we took that over. We rescued, rehabilitated, and placed 250 dogs and about 50 cats on another property.

Another of the big rescues was in Ohio where there was a pound that was going to euthanize 30 dogs. They were outdoors, in a sort of tented enclosure (if you even want to call it that), and they were being frozen. We tried to discuss the situation with the commissioners there and finally, after a very long process of convincing them that we could do something good for them, we got the dogs to be able to be inside and the food to be outside. When we left they were a no-kill shelter from that point forward.

Talk to us about the choice of “Gentle” in The Gentle Barn. What role does gentleness play in the healing process?

The thing about the word “gentle” is that it’s the essence of everything we do. Being kind and gentle to others, being kind and gentle to yourself, finding a way to be able to relay the message we want to relay in a gentle way. We don’t see ourselves as activists; we see ourselves as advocates. I think that activism is important, but in our world, we don’t want to create pain in someone to correct pain. What I mean by that is that if we’re considering the fact that factory farming is the #1 problem we have, and I go out there and yell at somebody and I’m judging them and shaming them, well, then I’m hurting them to get my point across. Ellie and I very early on decided that was not the way that we were going to go.

You need to tell us about the cow therapy that The Gentle Barn offers — how did that start?

Ellie founded The Gentle Barn in 1999, and within that first year, brought in her first cow. Her name was Buddha. The connection that Ellie had with Buddha was very intimate and very close. She would go out, and she would feel sad, or she would be struggling, and she would go and sit with Buddha, asking her questions like “How am I going to do this? I really want to bring this to the world, but I don’t know how,” and things like that. Buddha, who was just incredible, would wrap her head and neck around Ellie, and Ellie would hold her back. It developed from there. Ellie’s favorite saying is, “You can’t have a bad day after giving a cow a hug.”

There is this aura around them, this warmth. You can go out there on a cold day and sit next to a cow, and the heat of their body, their energy, will encompass you. They are absolute healers. If they feel safe, if they feel loved, then they exude this love, and I think that’s where it really becomes powerful. 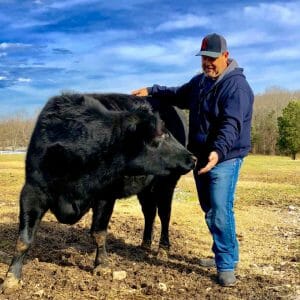 What made you decide to go vegan?

I became vegan at The Gentle Barn. It was because of a chicken named Olaf, who I called Mr. Olafson. When I would walk in the gate to the barnyard, he would be all the way on the other side; he would hear my voice and would run all the way across the barnyard to me. I don’t think that I ever had that experience with anybody else, except for my child. Sure, I’ve had dogs maybe do that, but this was an animal that I had no connection with, that I had no understanding of, that I didn’t see like a dog or a cat. To have this being, who was completely different than me, have that experience with me was mind blowing.

One day when I came in, he didn’t come running. He really loved the pigs, (and he would sleep on top of them) and I guess he had fallen off in the middle of the night, and the pig had rolled over on him. That was something that happened, and it killed him. Ellie did a little ceremony for him, but I was just angry. We had this bond. I ended up leaving.

The next day I was in the grocery store, and I was standing there by the prepared foods and saw the rotisserie. I saw these rows of chickens cooking in this thing. I broke down like a ridiculous child having a screaming and crying tantrum in the middle of this market, to the point where they were about to call an ambulance for me because I was just weeping and weeping and weeping. I had realized that these animals had saved my life and were innocent, and it just smacked me like a two by four to the head. That was when I dedicated myself to veganism and showing people how amazing animals are.

The Gentle Barn has had great success in helping visitors be more “open” to a vegan diet. How do you accomplish that?

We’re basically saying come out and meet the animals; we’re not saying come out here and learn how to be a vegan. However, once people get here, they’re going to learn about the animals’ stories and where they came from. If it’s a cow, they’re going to learn that they came from a slaughterhouse or they came from a backyard butcher. In telling that story and then connecting them to this animal in front of them, they can understand it and they can connect with it better.

Starting a sanctuary and doing this work is not something that should be taken lightly. You don’t just start rescuing a bunch of animals and throw them in your yard and think it’s going to work out. You have to have a good plan. Find people who are willing to work with you, teach you, mentor you in doing that. I would say that if people have the ability to support sanctuaries… if there is anywhere that needs support, it is there. And I would say that your animals that you have in your home, they want to be treated with love and respect. Talk to them. Tell them that they matter. Pet them, don’t pat them; they don’t like to be hit. And work really hard in your life to lean yourself towards a vegan diet. Try and be compassionate in your life; try not to hurt anybody to exist on this planet. You don’t need to. 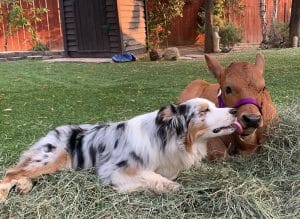