Home » Animals » From One Island to Another: The Story of Pandora’s Second ChanceBy Cindi Scholefield | April 7, 2021 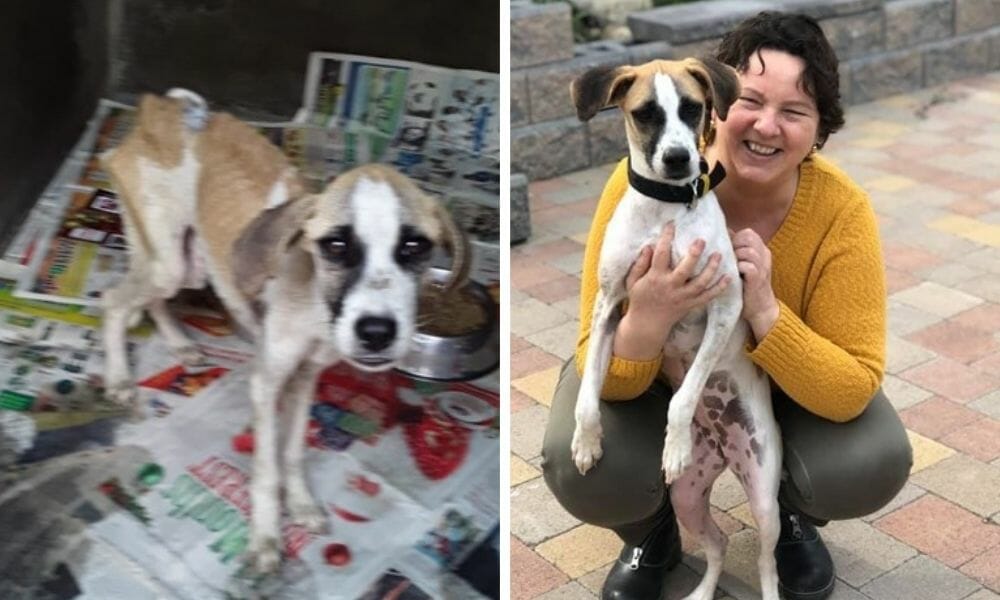 She wobbled to the middle of the busy intersection and turned to face the traffic, shaking. It was as if the struggle for survival had become too much and she had decided it was time to end it all.

But Paula changed everything. She spotted the dog among the cars, screeched to a halt, got out of her car, and stood in the middle of the road, forcing the oncoming traffic to brake while she gently picked up the trembling dog, carried her onto a side road, left some food with her, and dashed off to her appointment for which she was by now horribly late.

Then she called me, out of breath and crying so hard I could hardly make out the words.

I alerted the rescue group and Sharon jumped into action, flying along in her little car to find the fragile dog laying flat on the sidewalk, barely breathing and very weak. Soon enough, she was in the gentle and capable hands of Dr. McNab at Allpets.

And the next chapter of her life began with her new name – Pandora. 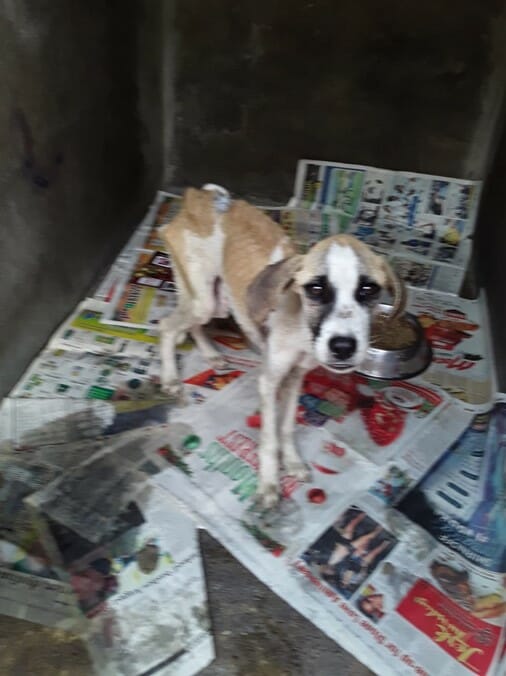 She weighed just 12 pounds. Her frail little body was nothing but a collection of bones jostling together and looking as if at any moment they would pierce her skin. She was covered in bruises and scrapes and cuts and was infested with fleas. She tested positive for heartworm. Her gums were white as a sheet. 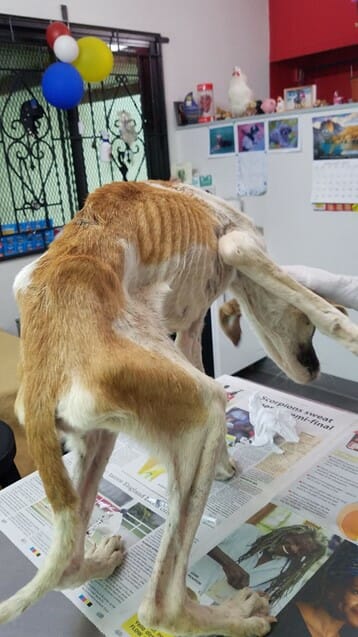 But she looked up with her huge, sad eyes, waved that stringy little tail, and bewitched everyone.

I asked for donations and they came pouring in.

Everyone loved Pandora and cheered for her survival. 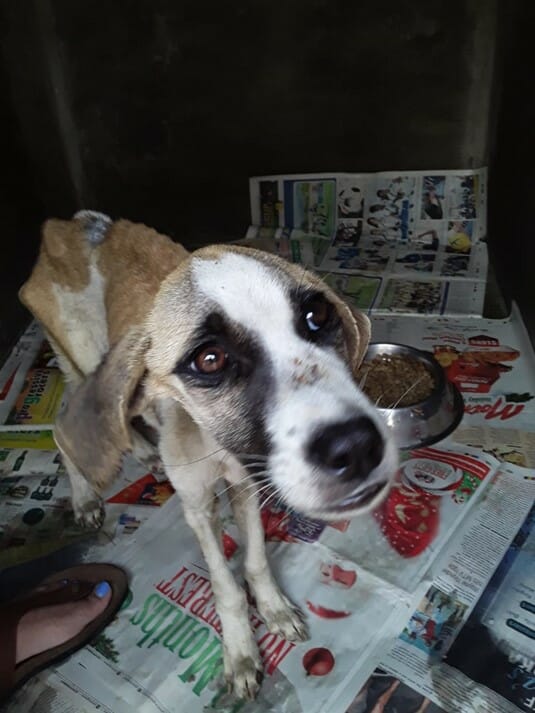 She got lots of visitors and lapped up the attention.

Social media users followed her progress and loved her.

She began to put on weight and her fur started to grow back. There was a new light in her eyes.

She was curious about everything. 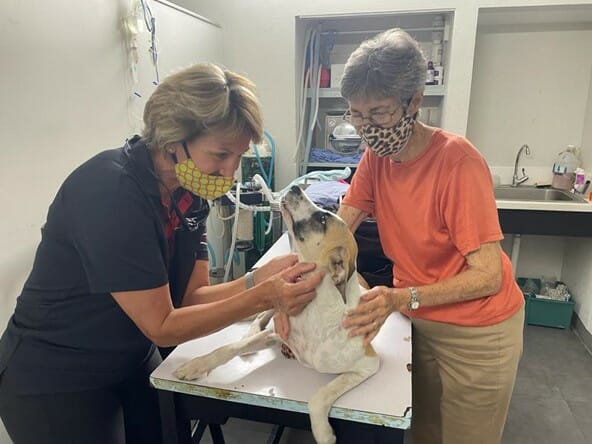 I began to visualize someone nice coming in to adopt her.

But I could not believe my eyes when Corinne, all the way in the Gulf Islands off the coast of Vancouver, Canada, expressed an interest. At first, I didn’t think she could be serious.

“She has no idea what it entails to arrange transport for a dog, with all those meticulous details, over 3,000 miles,” I said to myself. 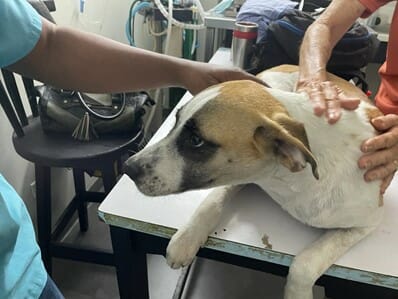 Corinne began conversations with Dr. McNab, and with Sonjia who does all the paperwork for dogs traveling abroad.

And she and Pandora started chatting daily on Facetime!

Little by little, the arrangements were put in place. Then, out of the blue, Canada stopped allowing inbound flights from the Caribbean. Not even cargo flights would carry live animals.

Suddenly, everything had to be re-thought, re-planned, re-booked, and reorganized. And just when everything was finally settled, another lockdown derailed the plans. Strict curfews and reduced flights out of Kingston meant Pandora had to leave from Montego Bay instead on the Friday morning of her departure.

But more trouble set in. In Montego Bay, the authorities announced the airway bill documents had to be completed before the flight arrived in Jamaica and —  Murphy’s Law being what it is — the flight arrived early. The airline refused to let Pandora board, and everything had to be re-booked for Monday. Luckily for Pandora, Sonjia generously offered her a guest room in Ocho Rios where Pandora spent her final weekend in Jamaica. Turns out she loves Easter bun and is a talented high jumper!

Pandora’s journey took her from Montego Bay to Dallas where, after she cleared customs, she spent the night in a doggy hotel. Early Tuesday morning she was picked up and returned to the airport to be put on another flight, this time to Portland, Oregon, way over on the west coast.

Corinne’s friends and neighbors Vickie and Clive had traveled south earlier in March to be vaccinated against COVID-19 (Vickie is American) and had agreed – if we could meet their schedule – to pick up Pandora and bring her back to Canada. Their original schedule had them leaving Portland on Sunday. But being the animal lovers they are, they agreed to spend an extra couple of nights just for this bright-eyed dog from the streets of Kingston.

So on Tuesday afternoon, they collected an exhausted but cheerful Pandora, spent one final night with their friends, and headed to the Canadian border at 5 a.m. 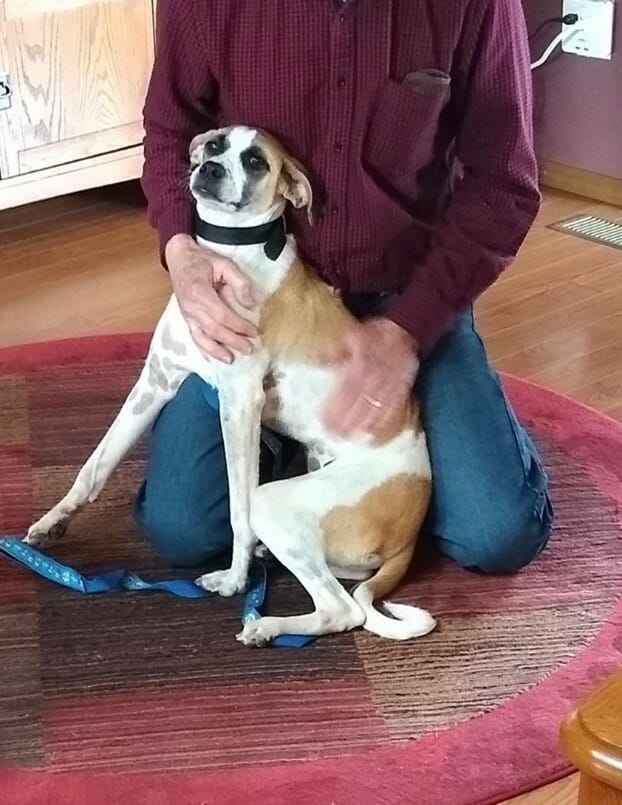 Five hours on the highway and two ferry rides later, they arrived on Salt Spring Island to Pandora’s forever home.

During that last week, no one who had been involved in Pandora’s trek slept or ate properly. We nervously awaited news as she completed each leg of the journey.

A collective sigh of relief went up when we finally got the photo of her in her new Mama’s arms. 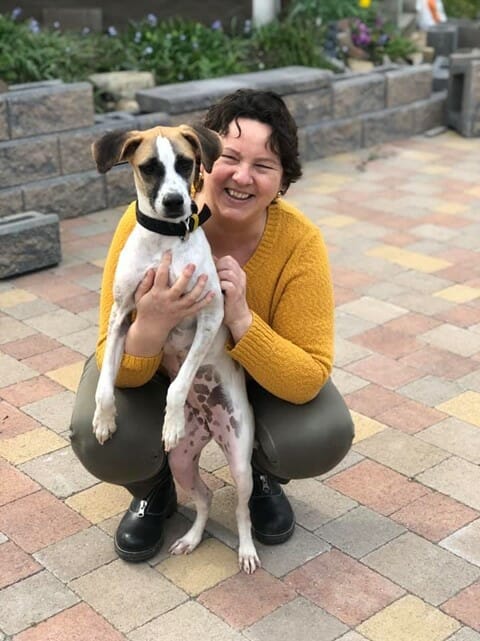 She is already in protective mode and barks enthusiastically at the workmen in the yard.

If any filmmaker would like to do a movie of this amazing journey, you can contact Pandora at Corinne’s house.

She may be practicing her new skills: sit, come, and the toughest one – “no!”

Or she may be relaxing and listening to opera. 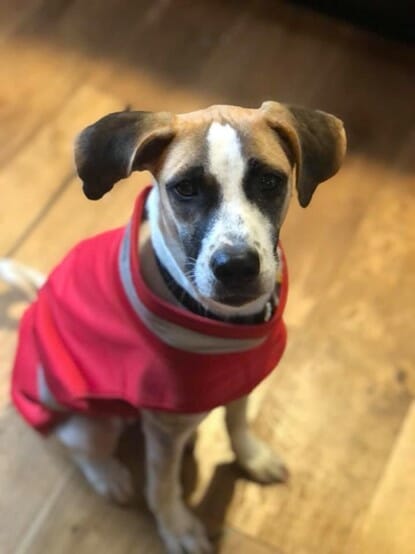