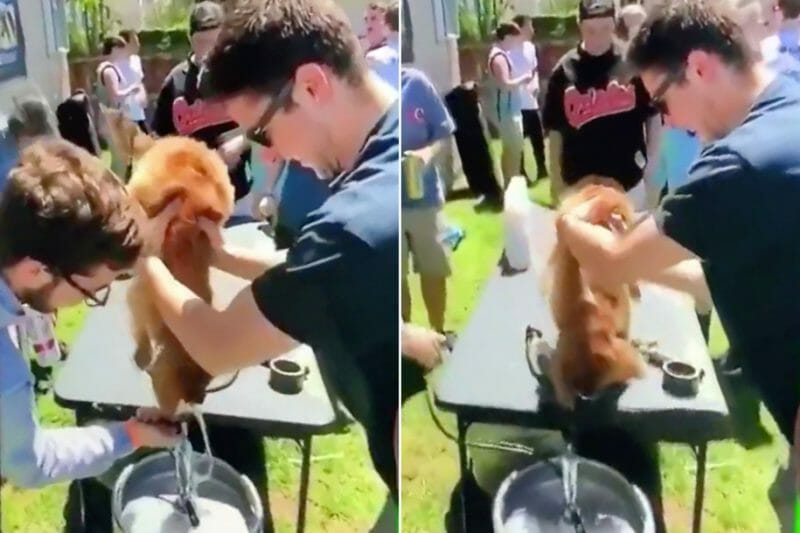 Officials have suspended members of the Alpha Epsilon Pi fraternity at Hofstra University in Long Island following the circulation of a video showing students forcing a puppy to drink beer at a party.

The short video, which first surfaced on Snapchat, depicts one student holding the terrified dog upside down while another pours beer into the animal’s mouth — a party stunt commonly known as a “keg stand.”

Onlookers can be seen and heard laughing in the background as the panicked dog — a Cavalier King Charles spaniel — tries to wriggle out of the student’s grasp.

To bring attention to this act of cruelty, another Long Island college student named Kristina Proscia posted the video on Twitter and Facebook.

so apparently it’s okay to force dogs to drink beer even though it can kill them???? @HofstraU @AEPi pls do better @peta pic.twitter.com/u8Wx78MUfL

Proscia’s original Tweet states “so apparently it’s okay to force dogs to drink beer even though it can kill them?” She also calls on the University and the fraternity to “do better.”

Proscia, who is the Director of Harm Reduction and Prevention of her sorority, stated in another Tweet that she had posted the video “to show that the Greek Life I know and love is not like this, nor supports it.”

The incident took place off campus and is currently being investigated, according to a statement issued by Hofstra spokeswoman Karla Schuster. University officials are trying to identify the two individuals in the video. Meanwhile, the fraternity will remain suspended from participation in campus activities.

“The behavior seen on the video is unacceptable and in violation of the University’s Code of Community Standards,” Schuster stated. “The University has been in communication with Alpha Epsilon Pi international headquarters, as well as with chapter members regarding this off-campus incident. In accordance with University policy, the chapter has been placed on interim suspension pending an investigation.”

The puppy is now safe and in the care of the Nassau County SPCA.