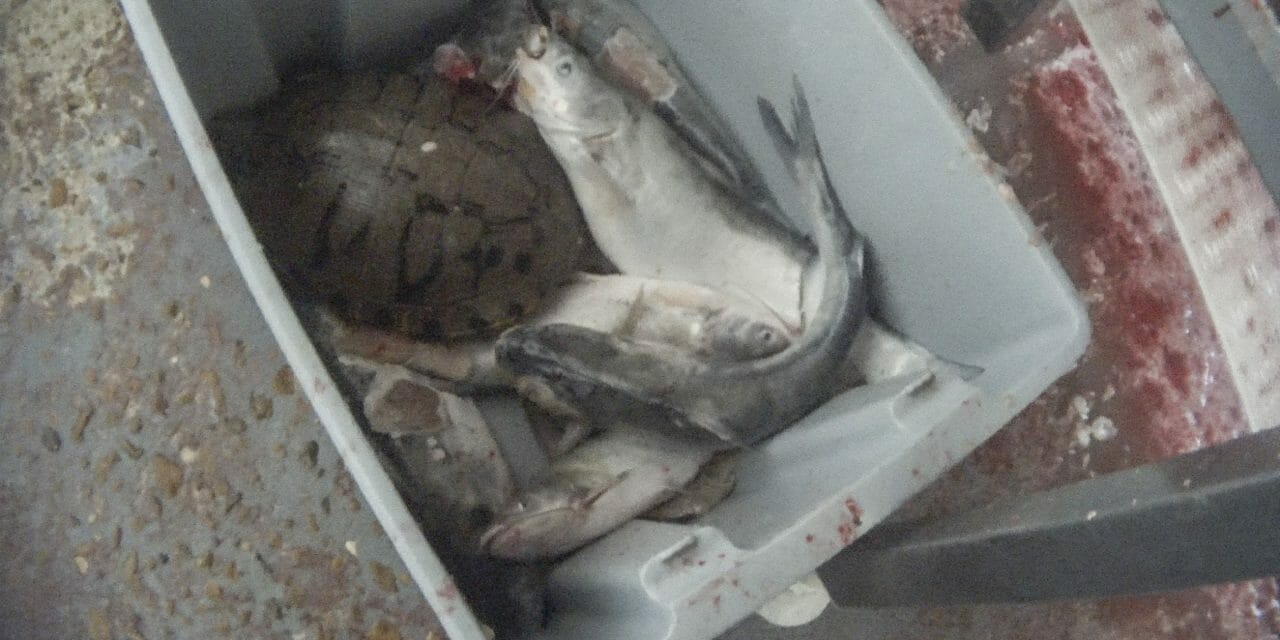 The ground up animals were then going to be used as fish feed for Simmons’ still-growing catfish, one employee said on camera.

Simmons is one of the largest USDA-inspected catfish slaughterhouses in the United States, supplying grocery stores like Kroger, Save A Lot, and Piggly Wiggly, as well as national restaurant chains like Cracker Barrel and Captain D’s. They slaughter up to 21,000 catfish per day, according to Animal Equality.

The company did not respond to a request for comment prior to the publication of this story.

Animal Equality’s undercover investigator said even the catfish who make it through the selection process are kept out of water for up to an hour before many are beheaded while still conscious.

While the fish pass through an electrical stunning device during processing, catfish are resistant to high-voltage pulses and quickly regain or never lose consciousness. Video evidence shows the animals flopping around and slowly suffocating in buckets and on the conveyor belt. Hundreds of the fish slowly suffocated out of water while workers went on break, according to Animal Equality.

Fish are sentient creatures capable of feeling pain. They must be protected, and Animal Equality is pushing for federal laws urging legislators to include fish and other aquatic animals in the USDA Humane Methods of Slaughter Act.

Sean Thomas, Animal Equality’s international director of investigations, told Lady Freethinker the investigation is significant both for what it revealed and what it represents.

“Despite the massive numbers of fish killing for food, animal protection organizations have paid little attention to their well-being until now,” Thomas said.  “We very much need the public’s support to include fish in the USDA Humane Methods of Slaughter Act, which as it stands, excludes aquatic animals. There’s overwhelming evidence that fish are sentient — they feel pain, fear, and they suffer — but there are no federal protections in place addressing their treatment at slaughter.”

Simmons could still be charged with animal cruelty under Mississippi law, which states that living creatures cannot be tortured, tormented, or deprived of necessary sustenance whether by reason of intentional cruelty or mere neglectfulness.

Animal Equality has submitted evidence to the Yazoo County Sheriff’s Office and County Prosecutor, alleging that Simmons’ practices — as documented via the undercover footage — could violate Mississippi Code 97-41-1 and 97-41-5.