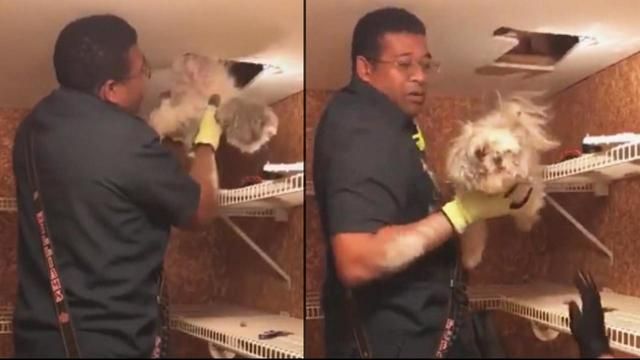 In late October, the Fairfax County Fire and Rescue Department rushed to the home of a Virginia family whose small dog had fallen into their HVAC system. The unfortunate accident occurred shortly after the homeowner’s young child removed the vent cover.

Firefighter Mark Williams told InsideEdition.com that the dog’s head was sticking out. He continued: “The homeowner said this dog has been in their family for 14 years. It’s a family member…safety is paramount.”

Despite having limited knowledge of HVAC systems, Williams and his crew of six vowed to get the dog out safely.

Williams further explained: “We went downstairs, we measured out how far the HVAC system is, then we went downstairs and in the basement, and into a closet. We paced it out, measured it out, to see exactly how we were going to get to the dog.”

Eventually, they were able to free the pup from the wall by using a drywall cutter to make a small hole in the basement ceiling.

The homeowner was grateful when the firefighters pulled the dog out. According to Williams, “She was standing right there and we handed the dog off to her. She was very emotional about it.”

The Fairfax County Fire and Rescue Department has praised the successful rescue as a “happy and pawsitive outcome for all!”