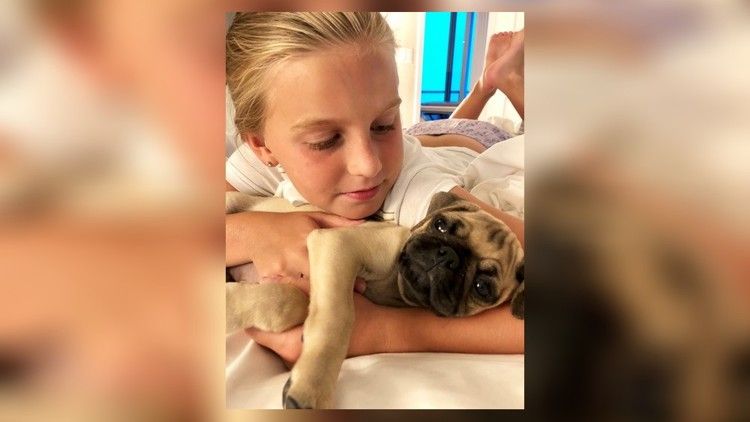 When a ten-week-old pug named Hank got stuck in a PVC pipe on Sunday, the firefighters of West Palm came to the rescue.

That afternoon, Lisa Gerard and her two daughters, Hannah and Lila, had visited Lisa’s sister Marisa Marulli, and brought their puppy Hank along with them.

A few minutes after Lisa stepped out to walk Hank, she yelled up to Marisa’s roommate. Something was clearly wrong, prompting Marisa to rush out of the house with green acne cream still covering her face.

After noticing Lisa’s frightened expression, Marisa looked down the PVC pipe and saw Hank’s little face. The pup was stuck so far down the six-foot-deep pipe, he was barely visible. Prior to that day, Marisa hadn’t noticed the inconspicuous pipe, which was located near bushes and trees, with its opening flush to the ground.

Hank was stuck all the way down, without even an inch of free space. The family became distraught, fearing the worst for their beloved pet, and many tears were shed as they awaited the assistance.

A frantic 911 call brought six firefighters to the residence. Because Hank was stuck too far into the pipe to be grabbed out of it, the rescuers came up with a plan B: to dig around the pipe until they were able to saw part of it off. As they got to work, they ran an oxygen tube down the pipe to help Hank breathe.

After spending the better part of an hour digging the six-foot hole, the firefighters sawed at the pipe, ultimately removing half of it. Julian Stout, the firefighter in the hole, was able to retrieve Hank and hand him off to his colleagues.

Hank was examined by a vet from Animal Control, who detected a fever and recommended a cool bath. After spending a terrifying hour or two trapped in the pipe, he’s back to his old self, and his family is quite relieved!