Elephant Shot in the Head by Poachers Survives

A Zimbabwe elephant now known as “Pretty Boy” faced near-certain death and won. Pretty Boy was found in Mana Pools National Park with a hole in his forehead, making it clear to witnesses that the elephant had been shot in the head — most likely by poachers.

“We suspect he was shot in head first and turned to flee and the poacher put a bullet in his side.” Dr Lisa Marabini told the BBC.

Most of the time, tracking down injured wildlife is a long, intensive endeavor. But Pretty Boy appeared to want help from humans. In an uncharacteristic move, the elephant approached an official vehicle within just half an hour after the search for him had begun. “It’s like he knew we were there with the intention of helping him,” said Marabini. 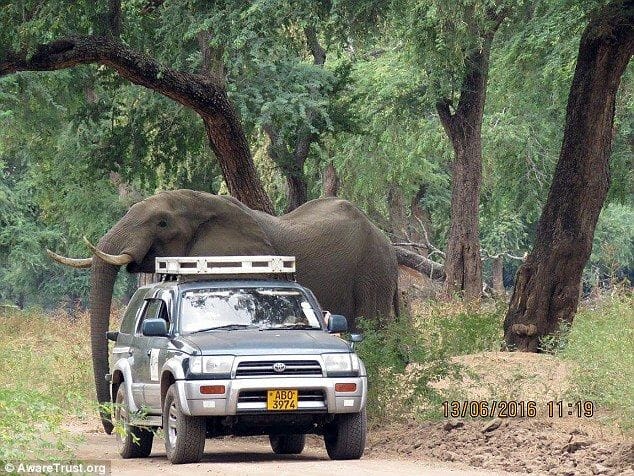 The trusting elephant was then tranquilized so that vets could give him the medical attention he needed.

“An extremely gentle and relaxed bull, the vets managed to get a good look at what immediately became apparent was a hole going into his forehead.”

Because Pretty Boy has such a massive head, it was impossible to remove the bullet. The vets removed the bone fragments lodged inside the elephant, then gave him long-acting antibiotics to prevent infection.

Pretty Boy was one lucky fellow — had the bullet struck his head just a bit lower, it would have entered his brain and probably killed him.

The day after the procedure, vets reported Pretty Boy feeling better and recovering well. May this be the last interaction he ever has with a poacher.