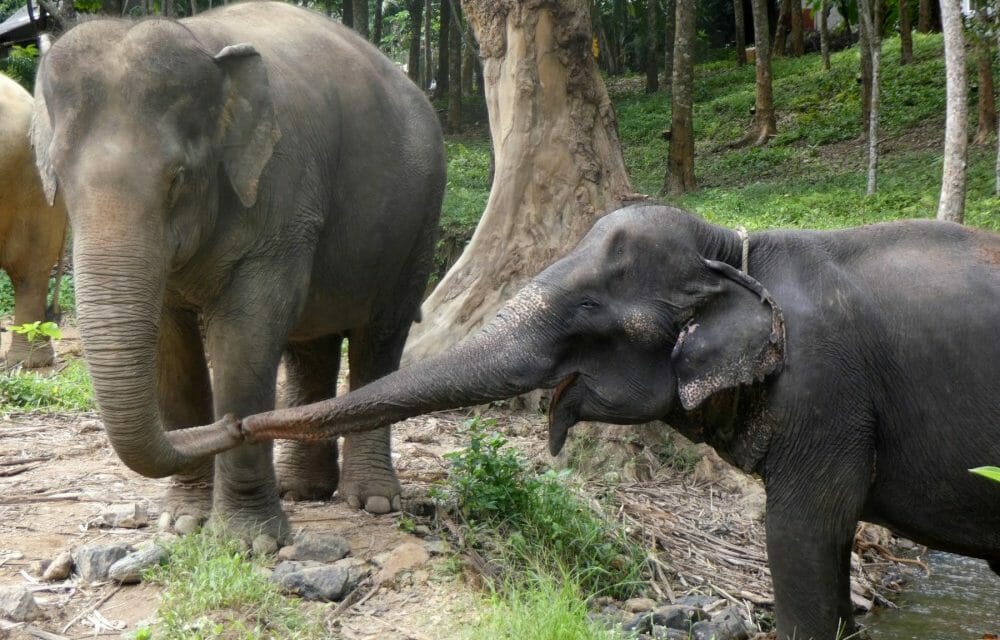 Sow, a 55-year-old Asian elephant who spent much of her life unwillingly giving rides to tourists, is now living with her ‘soulmate’ at the Following Giants sanctuary in southern Thailand.

Sow worked in the logging industry — where elephants typically use their tusks to carry logs to rivers, which would then float down to the logging mills — before performing forced labor and enduring harsh mistreatment in the tourism industry for over two decades. And it was only her decaying teeth that got her sent to a sanctuary, as veterinarians deemed her at risk of starvation.

Elderly elephants struggle to eat properly once their teeth start deteriorating, rendering them unable to grind their food. Staff at Following Giants ground Sow’s food for her, ensuring that she receives adequate nutrition.

“It’s already made such a difference to her personality and health,” David Owen, World Animal Protection’s consultant at the sanctuary, told Mirror Online. “She has so much more energy; she looks so much fuller; even her skin looks better.”

Sow reunited with her longtime friend, an elephant named Jahn, at the refuge. The pair, who met when they worked together in the logging industry, have known one another for around 30 years. They’ve formed a strong bond and are often seen interlocking their trunks in a heartwarming display of friendship.

“When Sow and Jahn were reunited at Following Giants, they were delighted to see each other again,” said George White from World Animal Protection. “Their joy at being able to spend time together is clear through their constant tactile interactions and vocalizations. Now able to socialize whenever they like, Jahn and Sow can spend many more years enjoying each other’s company.”

It’s unfortunate that Sow only just started living her best life after her teeth rotted away, and stories like this are a reminder that elephants are not here for our entertainment. When traveling, avoid all parks or roadside attractions that offer human-elephant contact, including rides and washing.