Dying, Formerly Chained Dog Gets ‘Bucket List of A Lifetime’ 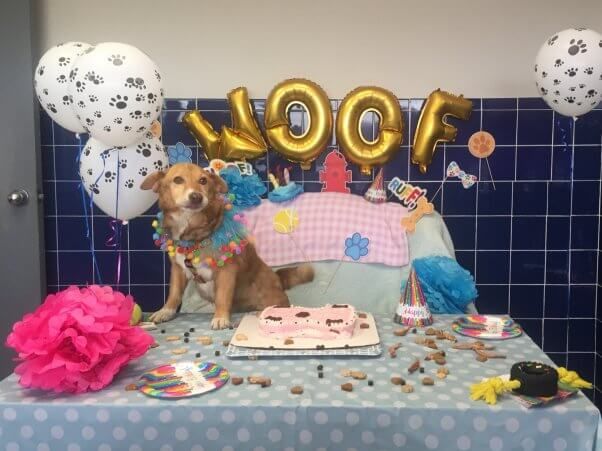 After spending 12 years chained up outside, living on a small patch of dirt, Miss Willie, a beautiful senior dog, was finally surrendered to a PETA fieldworker and lived out her last few weeks fulfilling the ultimate doggy bucket-list.

Miss Willie – a corgi mix – lived with her guardian in Halifax, North Carolina – a county which has no regulations barring the continuous tethering of dogs.

Over the last 10 years, PETA fieldworkers visited this sweet dog as often as they could, attempting to improve her quality of life and provide her with the stimulation and love that she was so sorely missing. They gifted her with a cozy doghouse filled with straw for protection from the elements, spoiled her with toys and food, filled up her water bowl when it was empty and spent time lavishing her with attention.

During Miss Willie’s life, PETA staff tried to convince her guardian to let her off the chain, or surrender her to someone who could give her a better life — to no avail.

When fieldworker Jes Cochran called in to see Miss Willie on a routine visit, he found the aging dog critically unwell. She was coughing, barely able to breathe and could hardly stand on her own. Finally, Miss Willie was given up so she could get the care she so desperately needed.

Sadly, vets had bad news for the corgi’s human friends: suffering from late-stage heartworm disease, lung tumors, tick-borne disease and a host of other problems, she only had weeks to live.

Cochran decided that this beautiful dog deserved the best few weeks of her life — a chance to do all the things she’d never been able to do.

Miss Willie was spoiled rotten. She had her very own birthday party with canine pals, spent days at the beach, had a massage, went for a canoe ride, visited a fire station and was spoiled with delicious vegan treats.

Chaining ordinances are sadly lacking throughout the U.S. Although 85  cities and counties — as well as the state of California —  have already taken steps to end this cruel practice, most areas have taken no action whatsoever.

“PETA is grateful to have been able to give Miss Willie a joyful final chapter after the lifetime of neglect that she endured,” says PETA Senior Vice President Daphna Nachminovitch. “This story shows exactly why PETA is so committed to banning continuous tethering of dogs everywhere, including in Halifax County, where this poor dog languished for over a decade.”

Tethering dogs for long periods is inhumane and unnatural, restricting their natural social behaviors by effectively putting them into solitary confinement. Often, chained dogs have no access to food, water, or shelter and suffer from flea and tick infestations, as well as flystrike.

Chaining also creates more dangerous animals – chained dogs become frustrated and territorial, increasing the risk of aggression. A study by the Center for Disease Control and Prevention (CDC) reported that tethered dogs were 2.8 times more likely to attack than dogs who were not tethered.

While Miss Willie had the time of her life for the last few weeks of her existence, no dog should have to suffer as she did for over a decade. All regions need to address tethering laws to help dogs have a happy, enriched life.