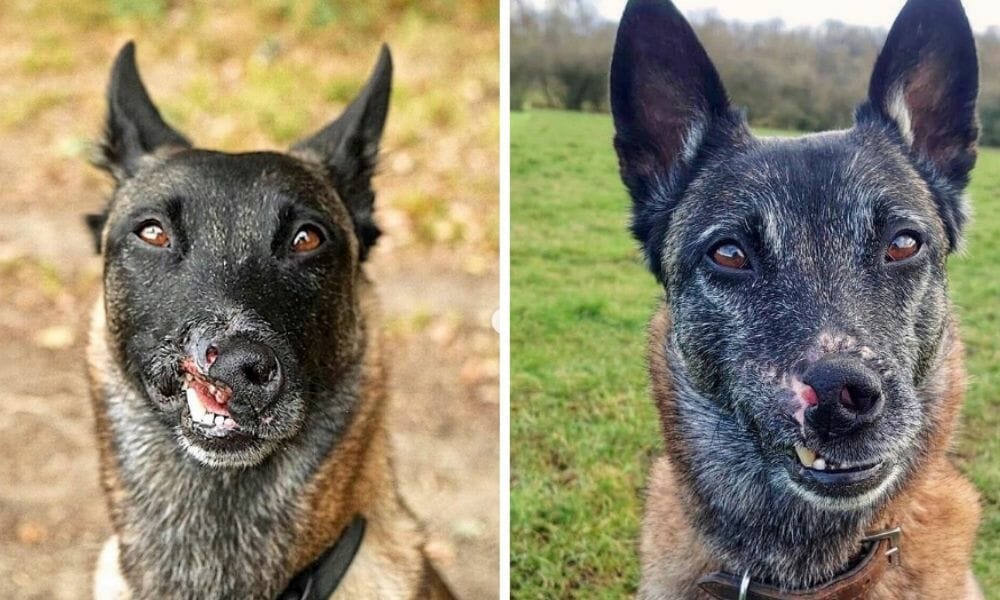 Angel, a Belgian shepherd, has received a much-deserved second chance at life after losing part of her nose in the cruel Chinese dog meat trade.

The abused dog recently underwent facial reconstruction surgery to help her breathe better, thanks to a crowdfunding campaign that raised over $5,000.

Activists rescued Angel in 2015, when they seized a truckload of dogs bound for a slaughterhouse in Changchun, China. They believe that Angel’s injuries resulted from the metal tools that dog catchers use to subdue their victims, Mail Online reported.

Veterinarians performed emergency surgery in Beijing before rescuers flew Angel to England in search of her new forever home. But she continued to suffer from her injuries — part of her face often bled, and she struggled to breathe.

Oxfordshire resident Hollie Cornes adopted the canine and began brainstorming ways to fund Angel’s medical costs. She appealed to the pup’s 30,000 Instagram followers for help and also started a GoFundMe account for the dog’s surgery costs.

One generous donor paid for a CT scan, which revealed  scar tissue had sealed most of Angel’s nose. In just four days, Angel’s compassionate followers donated enough money to foot the bill for a needed surgery, which she received the following week.

“We raised the money really quickly, which I never expected,” the thankful pet parent told Mail Online. “Without the fundraising and her support system it wouldn’t have been an option.”

Angel is “the sweetest dog I’ve ever come across,” Cornes said, explaining that she pursued the surgery to enhance the canine’s quality of life.

The operation has reportedly been life-changing for Angel. Thanks to her dedicated guardian, fans, and experienced veterinary team, she is finally breathing comfortably and living the life she fully deserves.