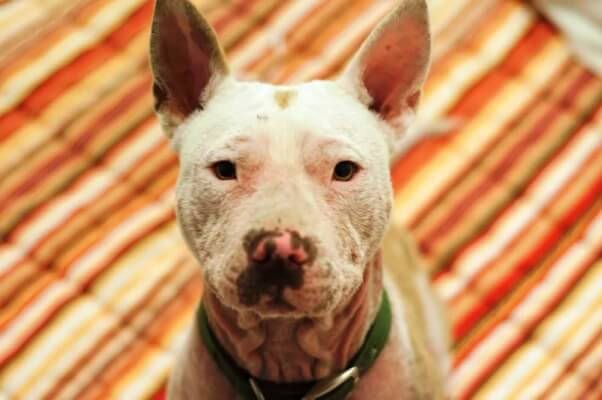 Countless chained dogs die due to exposure and malnutrition, and fall prey to diseases and infections like mange every year. These neglected animals are no match for nature while chained and abandoned in filthy yards — especially when the heat of summer or the bitter cold of winter take hold.

“Keane started life chained in the dirt-filled, junk-strewn yard of a breeder in a part of North Carolina where few laws protect animals and few officers enforce those that do exist,” PETA Vice President Colleen O’Brien told Lady Freethinker. “He lived outdoors in the cold, surrounded by mud and filth, and his life was filled with stress and anxiety.”

His fur had almost been completely eaten away by a horrific case of mange that was so bad it was “hot to the touch.”

But after being rescued, Keane’s life is different now.

“After spending all his life on a chain, with little social interaction or affection, Keane is now thrilled to explore the world,” said O’Brien. “His new guardians, the Kitchos, are happy to share that his fur is growing back so soft that he feels like a teddy bear—and whereas he once suffered from poor nutrition, in his new, loving home, he has already gained 7 pounds!”

“Kept ‘out of sight, out of mind’ in the backyard, chained dogs like Keane often spend an entire lifetime deprived of adequate food, water, and veterinary care—and their emotional and social needs are completely ignored,” said O’Brien. “Countless chained dogs have frozen to death during cold snaps or died of heatstroke on sweltering summer days, and many others have been stolen, set on fire, shot, stabbed, tortured, or poisoned by cruel passersby or neighbors who were annoyed by their barking”

But Keane is living a happy and healthy life in Pittsburgh with his new owners and adopted brother, Rex. You can read more about his story here.

Unfortunately, Keane’s previous life isn’t uncommon. But there are happy endings among the tragedies. Like Koa, a pot-bellied pig beaten with a crowbar and left to die, whom we reported about in August that now lives in a happy home.

And Jag, a dog that spent his entire life confined to a filthy chicken coop with 300 other dogs was rescued and has been living a very happy life in a forever home.

Animal welfare organizations like PETA continue to help neglected and abused animals in the poorest neighborhoods. But what we really need is an outright ban on the chaining of animals.

Take action when you see animal cruelty – report it to your local authorities. Let’s create happy endings for more animals like Keane!