Determined Rescuers Traveled 2,500 Miles Across the Country to Save a Trapped Kitten

Home » Animals » Determined Rescuers Traveled 2,500 Miles Across the Country to Save a Trapped KittenBy Carly Day | May 13, 2018 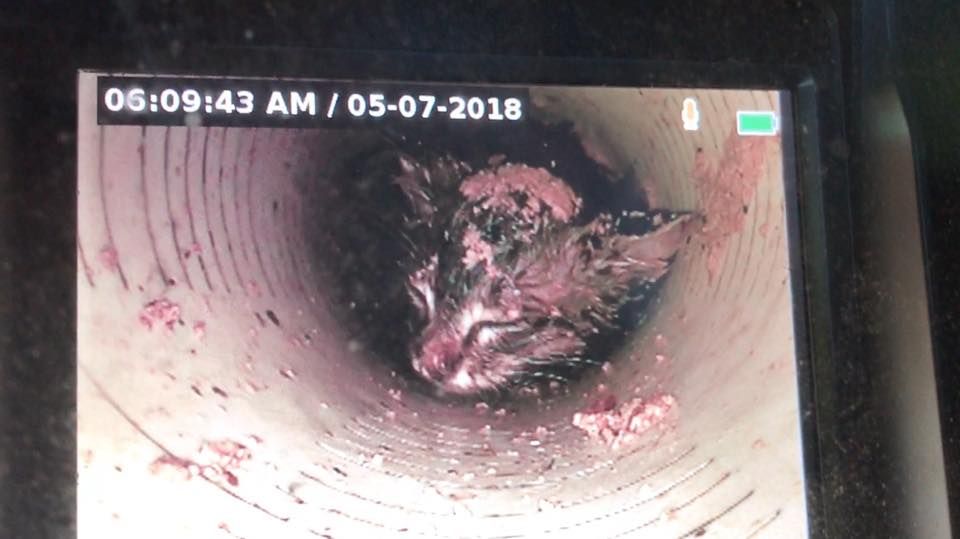 Two compassionate, animal-loving heroes made an emergency cross-country journey from California to South Carolina this week to rescue a 5-week-old kitten who had been stuck 43-feet down a well pipe for five days.

When Loreta Frankonyte and Eldad Hagar heard about the tiny kitten, trapped, weak and starving, they wasted no time in taking action. Hagar, founder of Los Angeles animal rescue group Hope for Paws, called for help in a Facebook post as they jumped on a plane in a race against time to save a life.

“This pipe is 4 INCHES wide, and goes 60 FEET straight down into the earth,” explained Eldad on the Hope For Paws Facebook page.
“Time is running out for this kitten… in 15 hours it’s already DAY 5 for the kitten down there.”

More than 600 people responded to the post, providing ideas and suggestions to help retrieve the helpless baby.

A caring homeowner had discovered the trapped kitten and reported it to Hope For Paws. She had attempted to create a ladder using sticks, but the contraption had broken, further complicating the rescue by blocking the narrow pipe.

On arrival to Carolina, the duo were met by friend and animal lover Kimberly Cockrell, and two plumbers from Freedom Plumbing, who had offered to assist with the rescue free of charge.

“Today was his 5th day inside the cold, dark pipe and the moment we landed, we received a new video of his,” wrote Frankonyte. “He was still alive but his voice was already weak, and Eldad and I knew that we were seriously running out of time.”

Removing the broken ladder using fishing gear, the plumbers then used a special camera to assess the wet, cold and weak kitten. In an amazing rescue, they were able to use a rope with a loop to carefully pull him out of the pipe. The kitten, who they named Jessie, was weak and ice cold.

“Our instinct kicked in and we chose what we thought would be quickest as little Jessie already had hypothermia and had to be rescued and rushed to the hospital asap!!!” said Frankonyte following the rescue. “We were relieved to know that no bones were broken, but he did have a little bit of muscle atrophy, that’s why his back legs were a little wobbly.” 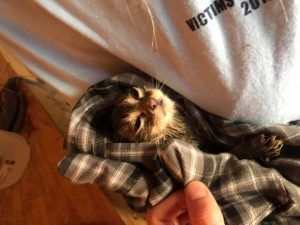 The next day the pair posted a video of wee Jessie exploring a room at the local veterinary clinic. In spite of his hypothermia and the length of time he’d been without food and water, he appeared remarkably bright.

This very lucky little cat was scheduled to fly back to L.A. with his two superheroes.

“Jessie says thank you all so much for your support, prayers and all the love,” posted Frankonyte. “He is recovering much faster because of all of you!!!”