Dead for 28 Minutes, Man Survives Thanks to Homeless Hero 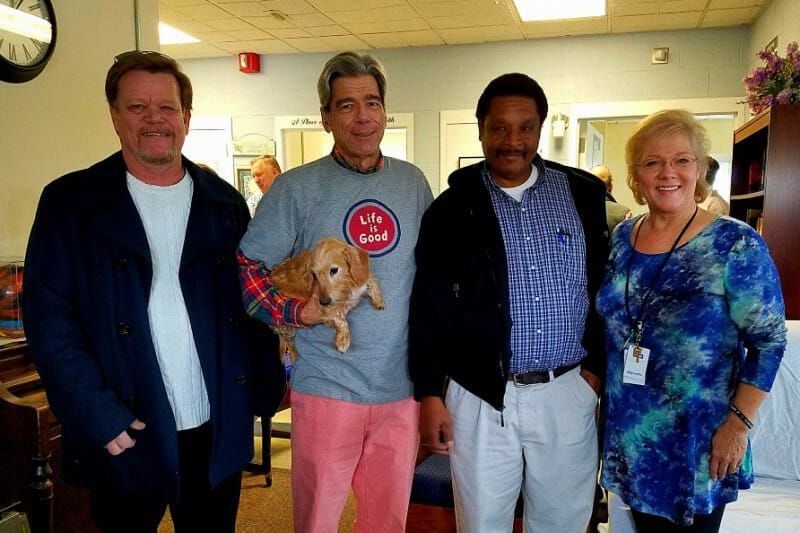 In a real-life miracle, a 57-year-old homeless man saved the life of a 64-year-old man who suffered a heart attack and was clinically dead for 28 minutes.

In August of 2017, George Dakin, Jr., a retiree from Hyannis, Massachusetts, went into sudden, severe cardiac arrest in front of CHAMP Homes Inc., a transitional shelter for homeless people in the area. Luckily for Dakin, CHAMP resident Austin Davis witnessed his collapse and rushed to the rescue.

Several weeks earlier, all the staff and residents of CHAMP Homes, including Davis, were trained in cardiopulmonary resuscitation (CPR). Along with two staff members, Davis performed chest compressions for 10 minutes while waiting for the ambulance.

“When I started doing compressions on him, I was looking at him and I could tell he was already gone,” Davis recalled. “When you’re doing it, it’s like time stands still. It probably felt longer than it was.”

Once the paramedics arrived, they took over the CPR and used a defibrillator to try to restart Dakin’s pulse, but he continued to flatline with no response. Dakin had suffered a massive heart attack, referred to as a “widowmaker” cardiac event because of the high rate of fatality. It was fully 28 minutes before Dakin regained a heartbeat. Doctors at the hospital were grim about his chances, warning his family that if he survived, he may suffer permanent loss of brain function from the lack of oxygen.

Miraculously, Dakin pulled through with minimal lasting damage; and by Thanksgiving he was able to meet Davis and the CHAMP Homes staff who were responsible for saving his life. An emotional Dakin tried to thank Davis, but struggled to find the words.

“The best thanks that I can show, being given this second chance at life, is to prove myself worthy of the gift and do something that can hopefully make a difference in his life,” Dakin vowed.

Dakin’s daughter, Jodi, was determined to help her personal hero: the man who saved her father’s life. She launched a Go Fund Me campaign with the aim of raising $10,000 for him to buy a car to commute to work. The campaign raised over $16,000, enough for a reliable car as well as health insurance and rent for the next year.

“Austin is doing everything right to escape his circumstantial homelessness, but the hurdle is tremendous. Odds of escaping homelessness are about as bleak as walking away from a heart attack,” explained Jodi.

Davis is blown away by the generosity of the Dakin family and everyone who donated. His actions in helping save a life were motivated only by human decency.

“I wasn’t expecting anything and I didn’t want anything,” said Davis. “I’m human and I need things, but that wasn’t what I did it for.”