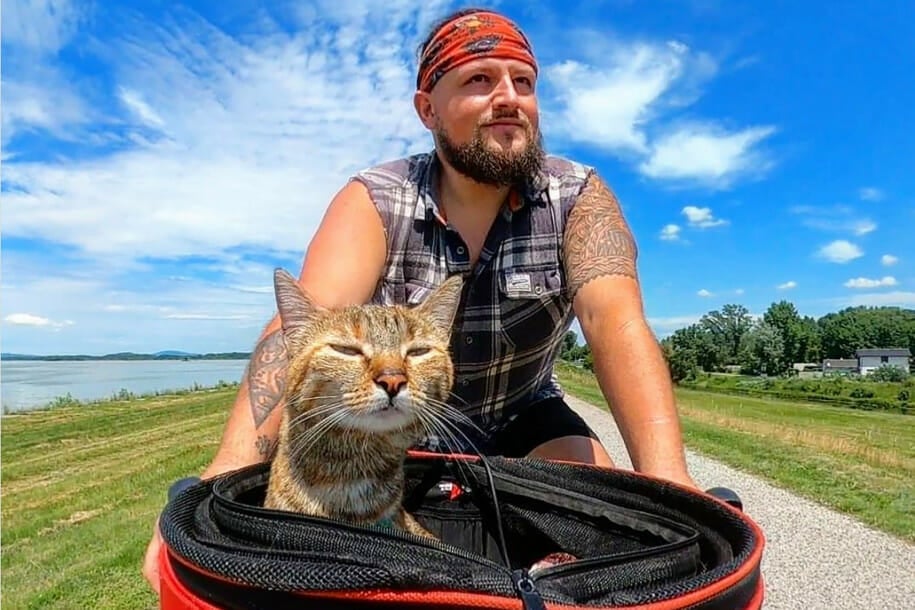 While cycling through the hills of Bosnia in December 2018, Dean Nicholson noticed a tiny grey-and-white striped kitten running after him.

He instantly fell head-over-heels for the affectionate feline, who wasted no time climbing onto his shoulders for a nice nap.

“She was just a wee, scrubby thing,” the Scotland native told the New York Post. “But she was beautiful.”

Nicholson immediately adopted the stray kitty, who he named Nala.  The pair remain inseparable ever since, with Nala riding shotgun in the front basket of Nicholson’s bicycle.

Together, the dynamic duo traveled to 10 countries. To wait out the ongoing coronavirus pandemic, they settled down in Hungary.

Throughout their journey, Nicholson and Nala bonded with Syrian children at a refugee camp in Greece, met a bear in Turkey, and traveled through Azerbaijan and Georgia.

They even helped rescue several homeless cats and dogs.

Before Nicholson embarked on his expedition, he was a metal welder, “just your typical 28-year-old.” Feeling somewhat stuck as a bachelor among couples, he accepted one of his single pal’s invitation to witness the world.

According to Nicholson, his furry sidekick helps soften his image. Fellow travelers and locals alike approach him far more frequently.

“I’m a big guy and I’ve got tattoos, so not many people will stop and talk to [me on my own],” he said. “But all of a sudden, when you’ve got a wee kitten on your shoulder, everybody wants to talk to you.”

Where will Nicholson and Nala go next? Their next expedition is sure to be full of fast friends, new sights, and lots and lots of adventure.