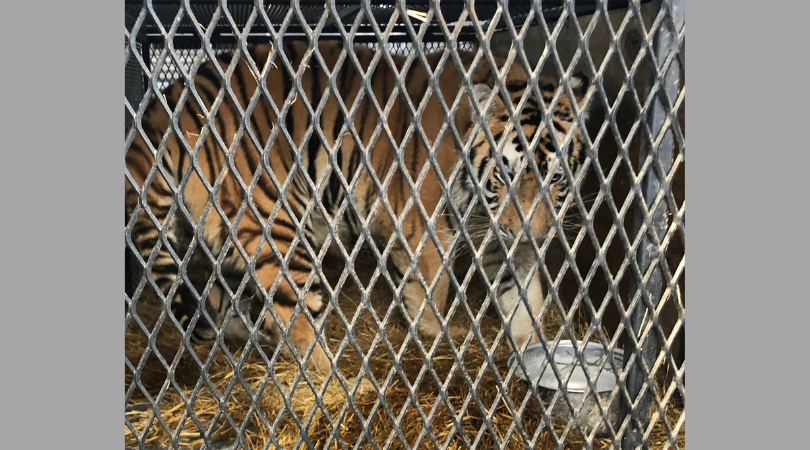 Authorities have arrested a Texas woman and charged her with a misdemeanor count of animal cruelty involving a non-livestock animal for keeping a fully grown tiger in deplorable conditions in an abandoned house.

The male tiger — known as Raja — was discovered in the garage of a Houston property in February, and reported by a concerned citizen.

After an investigation into the guardianship of the animal, police arrested 24-year-old Brittany Marie Garza, who was later released from the Harris County jail on a $100 bond.

A Lady Freethinker petition urging authorities to investigate this case and prosecute the person responsible has garnered more than 26,000 signatures to date. While Garza’s arrest is a step in the right direction, we need to keep pushing to ensure she is prosecuted appropriately.

While it’s not illegal to own a dangerous wild animal in Texas, animal welfare guidelines do exist.

A veterinarian who performed a health check stated that the approximately 18-month-old big cat had stunted muscles due to being shut in a small area for long periods.

Confined in a small wire cage, the tiger had no access to food, water or even light. According to an affidavit, the hay he rested on was mixed with “layers of trash, feces, urine, and rotting meat.” Mold, as well as maggots and other insects, was also present.

The big cat is now in the experienced hands of the Cleveland Amory Black Beauty Ranch in Murchison, Texas, where he has settled in remarkably well. With space to move, appropriate nutrition and care, the outcome for this beautiful boy is a positive one.

However, there are still an estimated 5,000-7,000 tigers living in captivity in the U.S., most of whom will suffer for their entire lives.

While 35 states have passed laws regulating the private possession of dangerous animals, there is no nationwide legislation to manage this serious issue. However, the federal Big Cat Public Safety Act, which seeks to address this, is currently on the table with Congress.