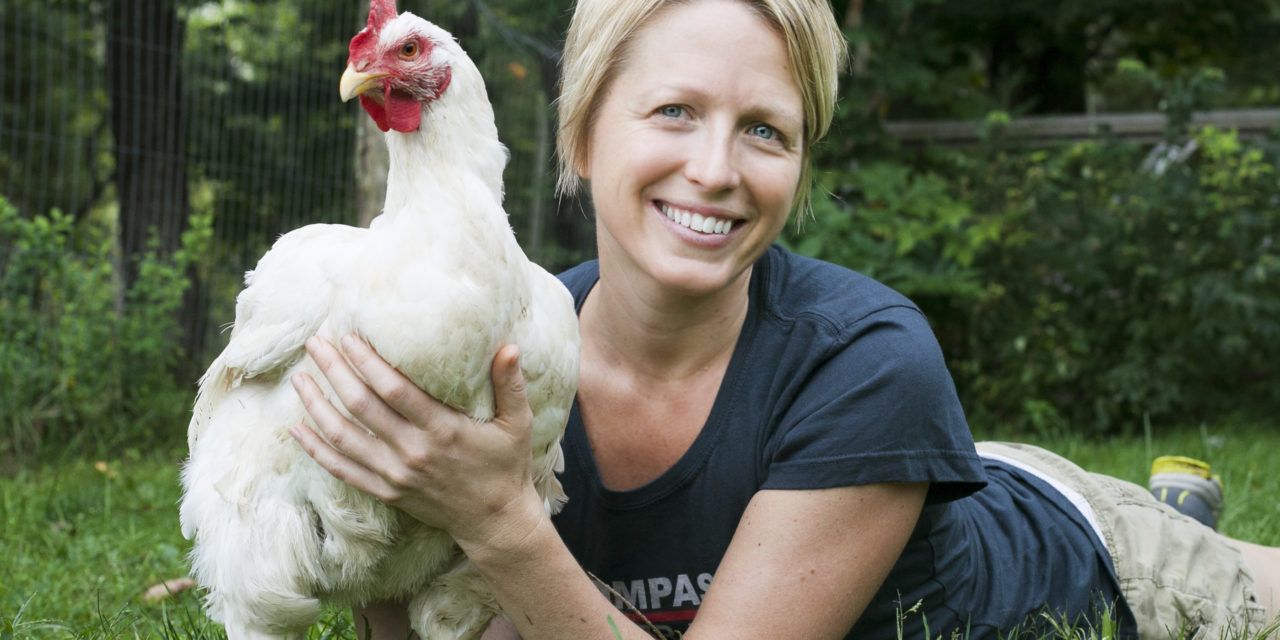 When Compassion Over Killing (COK) hit the animal-rights scene in 1995, they were an all-volunteer high school club. No budgets, development strategies, or even paid staff — just a group of dedicated kids out spreading the word about cruelty to animals.

But from those humble roots, COK has sprung up into a national organization that’s challenging laws, influencing minds and shifting corporate policy — all to stop animal suffering in the meat, egg and dairy industries. And over the past 12 years, the organization has blossomed to new heights under the leadership of Executive Director Erica Meier.

With Erica at the helm, COK stands out as one of the few farm animal advocacy groups today with top female leadership. That’s especially meaningful in an industry so overwhelmingly exploitative of females for their reproductive capabilities: the dairy cows whose bodies are ravaged for milk, and egg-laying hens trapped in battery cages their entire lives. But for these and all the other animals suffering in warehouse-like factory farms and hellish slaughterhouses, there is hope as organizations like COK strive to stop the abuse.

Erica spoke to me about her experiences at COK, and her life of animal advocacy. Here’s what she had to say:

Nina: Can you tell me how you initially got involved in animal advocacy?

Erica: As with most children, I saw myself as an animal lover. And in high school, I got really involved in environmental activism. This is when I started to draw the connection between nature, loving animals and how my meat-based diet was negatively impacting the environment. I had never quite felt comfortable eating animals, and now I found this opportunity to live a life of value with my diet, so I became a vegetarian. I had never met another vegetarian. I never actually even heard the word until I was reading some environmental activism book, between my freshman and sophomore year.

Then in college, I met someone who was vegan. She told me a little bit about the dairy industry and the egg industry, and asked me if I had ever heard of PETA, which at that time I hadn’t. I instantly became vegan, then soon after interned at PETA to learn more, and it was a whole new world for me. I decided that, somehow, I was going to dedicate my entire career to animal protection. I helped found an animal advocacy group on campus, got involved with the local animal rights club in my community and never looked back.

N: Before working at COK, you worked as an animal control officer. Are there any specific cases from that time that stand out to you?

E: There are so many incredible stories that stand out, but one in particular that is more unusual involves a note I found on my office door one very early morning — a warning that there was a monkey inside.

I opened up my office and there was a large dog crate in there with a tiny monkey — I mean, this was a facility in the nation’s capital that mostly handled dogs and cats, and there was a five-or-six-month-old female spider monkey who had been abandoned in an apartment building. I didn’t want to put her in the kennel area where the dogs and cats were. So I just kept my door shut and let her stay with me in my office. She clung to me all day as I feverishly worked to ensure her safe passage to a sanctuary.

I finally found a sanctuary willing to take her, got the city to agree to let her be released there, and found someone who was willing to drive about 4 hours to get her there. But none of that could happen until the next day. We named her Delia, and she was so young and frightened, she would not leave my side — literally. So I decided to spend the night in my office, so she wouldn’t have to be alone. She clung to me all night and we both managed to get some sleep.  The next day, we got her moving on to the primate sanctuary, where she is still living and thriving today.

N: That is such a sweet story! So how did you get involved with Compassion Over Killing?

E: Around early 2000, I started volunteering with COK. At that time, they were still engaged in all forms of activism: circus protests, fur demos, a lot of protests and silent vigils. I became more and more involved over the years. In early 2005, I was offered a job and have been the executive director ever since.

N: COK’s main focus now is on farm animal advocacy. Can you talk about why this is so important?

E: While COK was originally engaged in all forms of activism, we felt that we really needed to focus on where we would have the greatest impact — and farm animals are killed in the greatest numbers, and also have the fewest laws to protect them. We decided one of the most important ways to expose consumers to the realities of the meat, milk and egg industries was to go behind closed doors with undercover cameras and start to film what’s really happening to these animals.

And that’s how we launched our farm animal advocacy effort — through undercover investigations and reaching out to consumers about the abuse.

N: In that time, what have been some of your proudest achievements at COK?

E: When I took the helm in 2005, we started to take on the egg industry and a very misleading marketing claim that they had used ubiquitously on egg cartons in grocery stores across the country, called Animal Care Certified. This claim made people think they were buying humane products, but in reality the hens were still horribly abused.

So we challenged this claim. The egg industry fought us the whole way, but we uncovered Animal Care Certified as a myth, and the FTC finally got involved in the case resulting in the removal of that claim. So the egg industry can no longer use that logo or those words on cartons.

Since then, we’ve used that energy to challenge other meat, egg, and dairy industry products. We have shut down slaughterhouses, as well as a chicken and duck hatchery. Our investigations have led to cruelty charges and convictions. And we pitched a case against the dairy industry to a class-action law firm: a price-fixing scheme that resulted in a settlement of $52 million that the dairy industry has to pay consumers.

On the other end, we work with food corporations across the country to ensure that there are more and more vegan options available for consumers looking for healthier and kinder foods in the marketplace. If you go to Dunkin’ Donuts now, you’ll find almond milk on the menu, which they didn’t have before. Tim Horton’s now has soy milk. Starbucks is adding more vegan food choices. We’ve been working with Subway to offer a vegan option, like a vegan protein patty, in more stores across the country. We’re aiming to ensure that vegan options are available and widespread.

N: What are some of the biggest challenges you face?

E: One of the biggest challenges is encouraging people to get to know pigs, cows, chickens, turkeys, and other animals just like we know the dogs and cats in our home. When people meet them and open up their hearts and minds to these animals, it can be incredibly life-changing. So we often team up with sanctuaries to help introduce people to the personalities and the individuality of farm animals.

Some of the other challenges include the availability of food. If people don’t have ready access to vegan food, then it makes it harder for them to become vegan or to stay vegan. That’s why we are working on trying to ensure that national food chains are prominently featuring vegan options on their menu or have them on the store shelf.

Another obstacle is that Big Agriculture is passing what we call “ag gag laws” to criminalize undercover investigations. Rather than addressing the abuses that we’re documenting, they’re trying to prevent people from seeing them. So we’ve been working with coalitions to try to stop ag gag bills as they’re introduced, as well as try to overturn some of the laws that have already been passed.

N: What advice would you give someone who wants to help animals, but isn’t really sure how to start?

E: Without a doubt,  the most important and effective way we can make a difference for animals is to choose to leave them off our plates. Starting that journey may involve choosing vegan foods one day a week, or a couple of meals out of the week. It’s a matter of trying some new things and starting to discover what you really enjoy.

For those who are vegan, we can set an example to our friends and family. Bring really good vegan food to potlucks and holiday dinners. Or bring in vegan cookies and muffins to share with your colleagues. One of the most effective ways to somebody’s heart is through their stomach.

If we can introduce someone to vegan food, we can start to have that dialogue about what it is to be vegan, how to find vegan food, how to cook vegan food and firmly shape our habits when it comes to healthy eating. And that’s something that we, as vegans, can help our pre-vegan friends and family do.

Readers can visit TryVeg.com for a free Vegetarian Starter Guide, as well as tips on how to dine out, cook and get proper nutrition on a plant-based diet.

Want to get involved with Compassion Over Killing? They’re based in the DC area, but have opportunities across the US for tabling, passing out vegan recipes, calling companies to request vegan options, and more. Visit their website at COK.net for information. 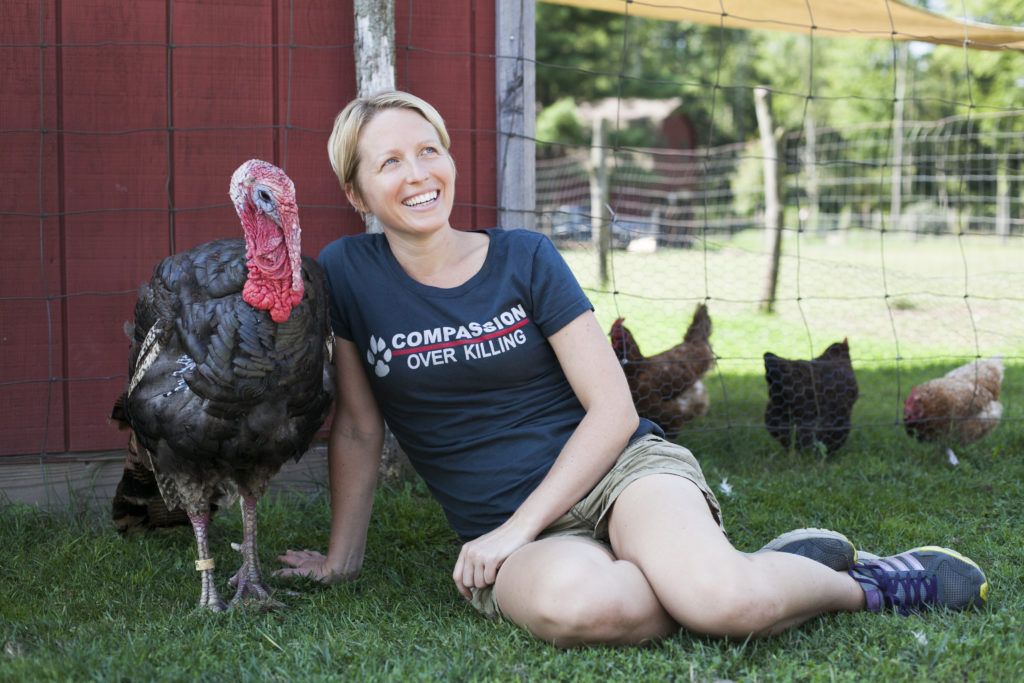