Community Bands Together To Save Elk Stuck in Freezing, Icy River on Christmas Eve 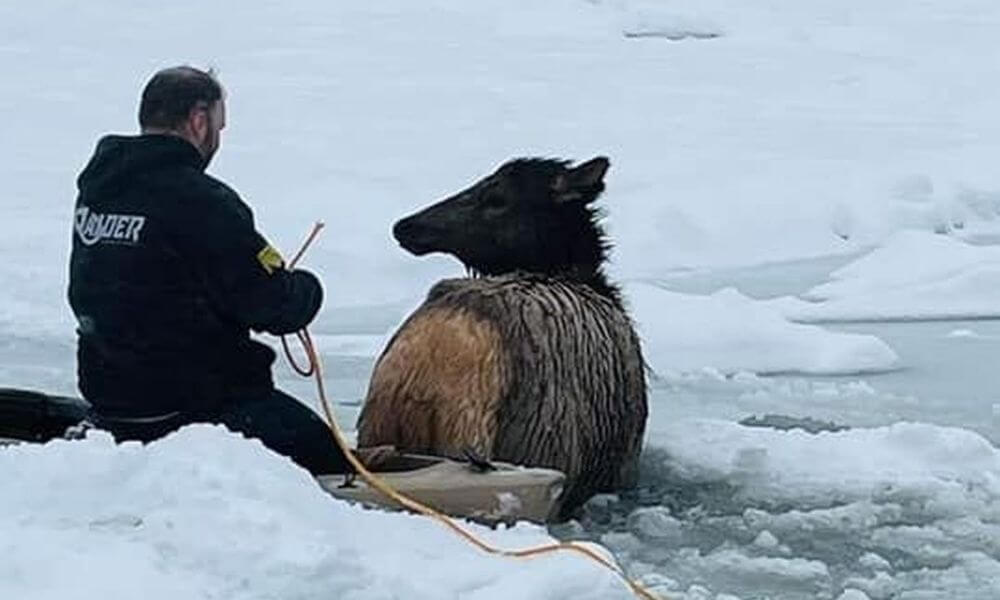 When Washington resident Rylee Stuart picked up her phone on Christmas Eve, she heard her husband tell her he was going into town to get some rope to try to save about a dozen elk trapped in ice in the middle of the freezing Kettle River.

“I told him I thought that was a terrible idea,” she told The Spokesman-Review.

Stuart described her husband Jeff as “stocky” and repeated that the idea of him on thin ice, with desperately thrashing elk, was “terrible.”  But Jeff Stuart and his brother-in-law Jordan Fish weren’t daunted from rescuing the elk after the ice proved too thin for them to traverse.

Instead, they raced back home, picked up kayaks, and headed back to the river.

Rylee, her mother, and the Stuarts’ five children followed the men back to the river and started rescue efforts. Their first rescue involved looping a rope around one elk’s neck and pulling the animal out by hand before exhaustion led them to attach the ropes to a Toyota 4Runner.

By 8 p.m., when the hours-long rescue concluded, more than two dozen people had shown up to help pull the elk out, including Stevens County Sheriff’s Office Deputy Michael Swim and Washington Department of Fish and Wildlife District (WDFW) 1 Officer Severin Erickson.

Their heroic efforts saved the lives of four cows and two calves, including a young female who couldn’t walk upon her exit from the river. Her rescuers swaddled her in blankets, exercised her legs until she was able to rejoin her herd, and named the calf “Lucky,” Rylee Stuart said.

The humans also ended up being pretty lucky themselves, said Staci Lehman, a communications director for the WDFW-Eastern region.

“These people were great, and they did some great stuff, but you’ve got to be so careful around water,” Lehman told The Spokesman-Review. “So we generally tell people not to do anything until somebody official is on scene.”

While the rescuers sustained several hazards – including falling repeatedly into the icy water, a broken hand, and a kick to the back of the head from an elk –  Rylee Stuart said they likely would repeat their compassionate actions.