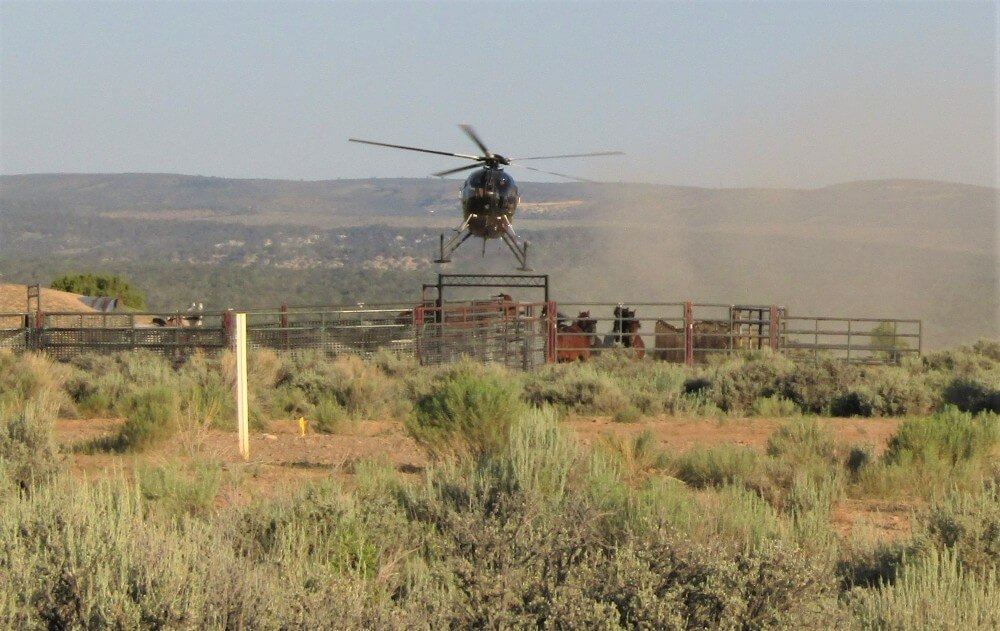 (Photo Credit: In Defense of Animals)

Three wild horses already have been killed, and hundreds more have been driven across rugged terrain by a high-speed helicopter in extreme heat, in an ongoing roundup in Colorado conducted by the Bureau of Land Management (BLM).

The federal agency originally planned the roundup for September but used an “emergency” declaration to expedite the process – meaning the panicked wild horses are now running for their lives in the hottest days of the summer, according to a press release from nonprofit In Defense of Animals (IDA).

IDA sent an observer to the roundup in the Piceance-East Douglas Herd Management Area – a more than 190,000 acre area in northwest Colorado that’s southwest of Meeker and east of State Highway 139 that’s mostly rolling hills of pinyon-juniper and sage.

Although the BLM positioned observers up to one mile away from the actual traps, IDA’s observer reported on the 90 degree heat, and also that the transport road used to truck the captured horses to a holding facility was “so rutted and washed out in places that it took out a skid plate in our representative’s SUV,” according to a press release.

As of July 26, the BLM had used a contracted helicopter operator to round up 733 horses. Three horses have been killed for what the agency calls “pre-existing conditions,” with no additional information immediately available, according to the BLM’s daily gather reports.

On its website, the BLM claims the emergency operation aims to gather “wild horses in poor condition” while also implementing population contraception and permanently removing horses in order to establish a “thriving natural ecological balance with multiple-use relationships on public lands.”

However, evidence shows that this is not an accurate statement—killing and injuring horses contradicts their “goal” to help animals in poor condition, and no horses have yet been treated with contraception, according to the BLM’s gather reports.

IDA said that an independent environmental assessment, conducted by a Colorado Sierra Club ecologist, indicates that there is “no evidence to support the BLM’s claims of wild horse malnourishment,” with healthy-looking horses spotted by their observer, who attended five consecutive days of the roundup. 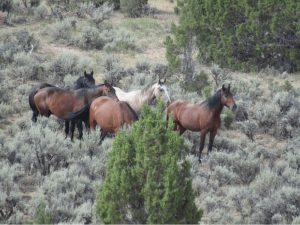 (Photo Credit: In Defense of Animals)

As for the BLM’s statement that the wild horses are degrading the land and that there’s not enough forage for the wild horses, IDA noted in its press release that the federal agency is continuing to allot grazing permits for ranchers and their cows.

“At the same time the BLM declares the range in the Piceance basin to be in such poor condition that they must remove the majority of the wild horses, it continues to authorize the livestock grazing that is the primary cause of the degradation of our public lands,” IDA said in a media release.

“It was extremely difficult to witness these horses lose their freedom, especially knowing they are only being removed to benefit special interests,” said Ginger Fedak, IDA’s Wild Horse and Burro Campaign Director. “Our own government agencies have put the interests of private livestock operators above those of federally protected wild horses and burros, to the detriment of both the wild equids and our public lands.”

Colorado Gov. Jared Polis and Congressman Joe Neguse are among those who have denounced the cruel roundup, which follows reports of a deadly disease outbreak at a BLM holding facility Cañon City that killed 145 defenseless wild horses who had not been vaccinated in the timeframe required by the BLM’s own policies.

If you haven’t already, please sign our petition urging the federal government to stop these cruel helicopter roundups, where defenseless horses face injury and death.